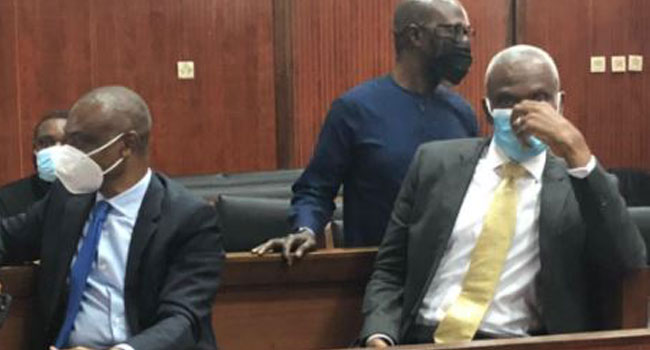 A Lagos High Court sitting in the Ikeja area has sentenced former managing director of defunct Bank PHB, Francis Atuche to over 6 years in prison.

In a judgment that lasted over 10 hours, Justice Lateefat Okunnu convicted Atuche alongside a former Chief Financial Officer of the bank, Ugo Anyanwu.

The two were convicted on at least 6 of a 27-count amended charge of conspiracy to commit a felony and stealing brought against them by the Economic and Financial Crimes Commission (EFCC).

They are to serve their jail term consecutively. This sentence is coming after a trial that lasted over 12 years.

In delivering her sentence, Justice Okunnu held that the EFCC successfully proved its case against the convicts beyond a reasonable doubt.

The judge rejected claims by the defendants suggesting that they were merely professionally negligent.

She specifically held that Atuche and Anyanwu abused their powers, ignored established rules and regulations thereby putting the bank and depositors’ funds in danger.

The court also came to the conclusion that the convicts corruptly took advantage of their positions to confer on themselves undue financial benefits without regard to the health of the bank.

“The convict stole from the bank and depositors and because of their action, taxpayers money was used to bail out the bank”.

Justice Okunnu held that she had considered the plea of the convicts, but there must be consequences for wrongdoing, adding that sentences are not just for punishment but also for deterrence.

She also ruled that the defendant should make restitution of the amount stolen from the bank. They are to pay back the sum of N25.7billion to the Federal government to replace the funds stolen from the public to bail out the bank.

According to the Judge, they are to serve their jail terms at the Kirikiri maximum correctional facility in Lagos.

Justice Okunnu however, cleared Atuche’s wife on the charge of conspiracy and stealing.

According to the judge, the EFCC failed to link her to the crime and insisted that suspicion no matter how strong can not take the place of fact.

The judge held that it was not proven that she was aware of the source of the funds she received into her account from her husband and she had no powers to take any decision to influence the transaction.

The EFCC had alleged that between November 2007 and April 2008, the accused persons stole about N25.7bn belonging to the bank.

The anti-graft agency had also claimed that of the total N25.7bn, they stole about N14.7bn by fraudulently describing it as a loan to some companies and subsequently converted the said sum to personal use.

The EFCC also alleged that another N11bn stolen by the defendants was used to purchase about 984,375,000 units of Bank PHB shares for themselves.

According to the commission, the sum used for purchasing the shares was described as a loan to some companies including, Guesstrade Services, Sentron Trading, Montrax Investico, Claremount Management Ltd., Trenton Trade, and others.

In proof of its case against the accused persons, the EFCC called 12 witnesses who gave oral evidence. It also subpoenaed 6 others to present some documents which were admitted as exhibits by the court.