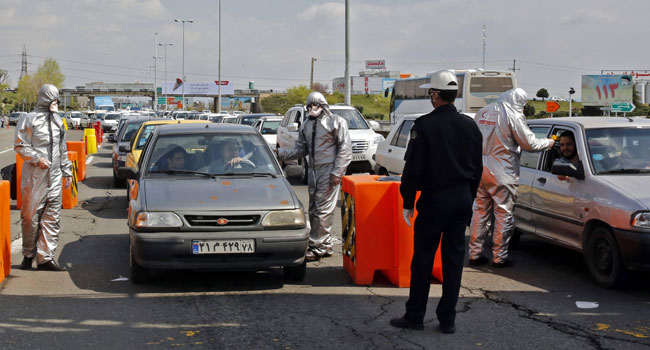 “Some prison guards were summoned and four of them were arrested and others released on bail,” Mojtaba Shirouzbozorgi, a judicial official in Kurdistan province, told IRNA.

According to the agency, 74 inmates escaped from Saqqez city’s prison on Friday, 20 of whom have so far either turned themselves in or been captured.

On March 19, 23 prisoners escaped from another jail in the western city of Khorramabad, the capital of Lorestan province, hours before the start of Iran’s New Year celebrations, IRNA said.

They reportedly escaped during the night while guards were making preparations for a New Year amnesty.

The escapees had been serving a maximum of one-year sentences, the agency said, denying that dangerous criminals were at large.

There were also prison riots in Hamedan and Tabriz provinces, and Aligoudarz city in Lorestan as authorities prevented escapes.

Hamedan’s prosecutor told IRNA that the unrest there was “over the excuse of the coronavirus outbreak.”

One inmate died and another was injured at the riot in Aligoudarz prison.

Around 10,000 prisoners are expected to be released in the New Year amnesty, according to Iran’s judiciary.

The move aims to “reduce the number of prisoners in light of the sensitive situation in the country”, a judicial spokesman said, making no explicit reference to the coronavirus pandemic.

Iran’s judiciary has also temporarily released 100,000 detainees in an attempt to contain the spread of the disease, the spokesman said on Sunday.

According to the latest official toll, the virus has killed 2,640 people in the Islamic republic, ranking it among the world’s worst-affected countries.