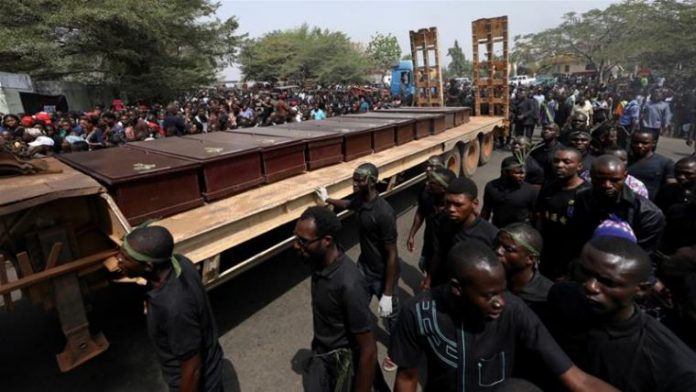 Eleven Christians were killed in an attack on a village in Kaduna state, north-western Nigeria, on Monday.

Around 50 armed Fulani herdsmen invaded the village of Gora Gan at around 7 pm on Monday evening and set houses on fire, according to Rev Isaac Ango Makama, of the Christian Association of Nigeria.

Seven other Christians were injured and are being treated in hospital but many others are missing, Morning Star News reports.

Hundreds of Christians are taking refuge at a camp for displaced people as a result of the violence.

Ezekiel James, a camp official told the website: “They are Christians who escaped the attack against Gora Gan village and other villages in the past few days. These internally displaced Christians are in dire need of food items, drugs, and facilities to treat those who are traumatized.”

At least 50 Christians have been killed in attacks in southern Kaduna in the last month and a half, Morning Star News reports.

In Kukum Daji, in the south-east of Kaduna, 18 Christians were killed and 31 others injured in an attack on a wedding reception on 19 July, according to local Christian leader Yashen Sunday Titus.

He said the attackers were “heavily armed”.

Sources told Morning Star News that Fulani herdsmen killed five Christians, including a three-year-old and six-year-old, in another attack on a village in Kajura County on 17 July.

In attacks on the villages of Chibuak and Kigudu on 9 and 10 July, 20 Christians were killed.

Roman Catholic priest the Rev Aaron Tanko told Morning Star: “Some of those killed are my parishioners and other Christians of other church denominations.

“Christians here are at the mercy of Fulani herdsman, as these herdsmen are always well-armed, and they invade our communities and kill Christians at will.”