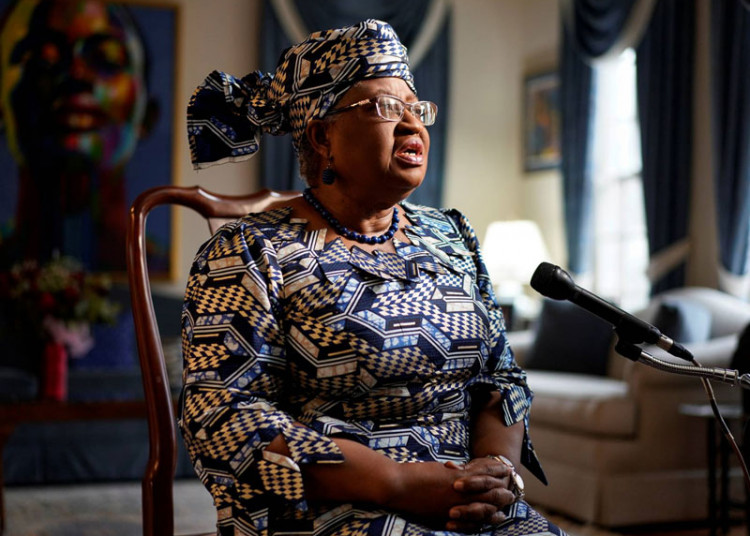 The World Trade Organisation (WTO) has forecasted that Africa’s share of the volume of the world’s merchandise export and import will increase by 8.1 per cent and 5.5 per cent respectively in 2021.

The predictions were made in Zurich, Switzerland, Wednesday by the Director-General of the WTO, Dr. Ngozi Okonjo-Iweala, during the virtual “WTO Press Conference on Trade Forecast for 2021 and 2022 and Review for 2020.”

Okonjo-Iweala, at another forum also called on Nigeria along with other nations to embrace renewable energy sources to curb the threats that products of carbon-emitting origin pose to the world.

The WTO forecasted that global trade would return to its pre-pandemic trend by the fourth quarter of 2021, if vaccines production and distribution are accelerated.

It forecasted that world merchandise trade volume would grow by eight per cent in 2021, after falling by 5.3 per cent in 2020, which it described as a smaller decline than previously estimated.

It, however, projected that trade growth would likely slow to four per cent in 2022.

The WTO said: “Short-term risks to the forecast are firmly on the downside and centred on pandemic-related factors. These include insufficient production and distribution of vaccines, or the emergence of new, vaccine-resistant strains of COVID-19.

“Over the medium-to-long term, public debt and deficits could also weigh on economic growth and trade, particularly in highly indebted developing countries.”

Okonjo-Iweala stated that access to COVID-19 vaccines would be the best stimulus to global economic recovery and vowed that poor countries would never be made to stand in a queue waiting to get vaccines while 70 per cent of available vaccines are administered by only 10 countries as stated by the World Health Organisation.

The WTO’s review of the global merchandise trade in nominal dollar terms showed a decline of seven per cent in 2020 while commercial services exports declined by 20 per cent in the same year.

It attributed 35 per cent contraction in trade in fuels in 2020 to falling oil prices, adding that travel services were down by 63 per cent in 2020 and would not be expected to fully recover until the pandemic waned.

Okonjo-Iweala also said the blocking of the Suez Canal by a container ship, which hundreds of ships stranded or forced to go around the Cape of Good Hope at additional costs to their journey, has been projected to affect global trade by $10 billion per day.

It stated: “In the upside scenario, vaccine production and dissemination would accelerate, allowing containment measures to be relaxed sooner.

“This would be expected to add about one percentage point to world GDP growth and about 2.5 percentage points to world merchandise trade volume growth in 2021. Trade would return to its pre-pandemic trend by the fourth quarter of 2021.

“In the downside scenario, vaccine production does not keep up with demand and/or new variants of the virus emerge against which vaccines are less effective. Such an outcome could shave one percentage point off of global GDP growth in 2021 and lower trade growth by nearly two percentage points.”

Meanwhile, Okonjo-Iweala called on Nigeria along with other nations to embrace renewable energy sources to curb the threats that products of carbon-emitting origin pose to the world.

Speaking alongside other world leaders at the virtual opening session of the International Energy Agency (IEA) “Net Zero Summit,” she said climate change remained a global public issue, which could undermine the role of trade as an engine for economic growth.

Okonjo-Iweala said climate change threatened poverty reduction and was a risk to all countries.

She stated that the WTO was embarking on initiatives to encourage international trade on renewable sources of energy to tackle carbon emission threats.

According to her, pushing for environmentally-friendly goods and services and making them accessible and affordable will be a major step forward for the global community.

She said: “Take renewable energy for example, it’s being talked about and in just a decade, solar, biotech and wind power have become the cheapest sources of electricity in many markets.

“The cost of solar energy, for example, has decreased by 80 per cent since 2010, jobs in the renewable energy sector was around 11 million worldwide in 2018 and are expected to quadruple in 2050.

“Trade has played a key role in turbo-charging these developments by unlocking investments, fostering innovation and allowing the movement of goods and services around the world.”

Okonjo-Iweala said the recent action of the United States in rejoining the Paris Agreement was encouraging, noting that the WTO will continue to support trade rules that underpin the greening of the planet.

“International trade and WTO rules must support effective action on climate change. We need members of the WTO to converge on their positions as we move towards the 12th ministerial conference where a lot of decisions will be made,” she added.

She stated that the WTO has started important initiatives on trade and environmental sustainability, , stressing that 53 members are now working together to achieve concrete results on how environmental goods and services should be traded to foster those ones that are beneficial to greening the planet.

Okonjo-Iweala said the world body had also started an initiative on plastic pollution, adding that up to five per cent of annual global oil consumption is now associated with plastics.

She added that the WTO is looking at how to contribute carbon border tax adjustment and how it accords with the WTO rules.

She called for the scaling up of investment, both public and private, to accelerate the dissemination of climate technologies to lower carbon emissions globally.

“We don’t want developed countries repeating the mistakes we have made since the 1800s. But the reality is that none of us can get there alone,” he said.