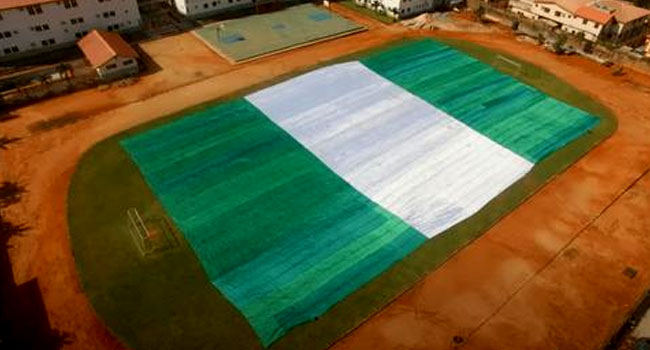 The world’s largest flag covering an area of 3,275 square meters has been unveiled in Ibadan, the Oyo State capital.

Created by the designer of the Nigerian Flag, Taiwo Akinkunmi, the flag was unveiled on Thursday by the Chief of Defense Staff, General Lucky Irabor.

Prior to the unveiling, the Guinness world record for the largest flag was held by the United Arab Emirate which covers an area of 2,448.6 square meters.

General Irabor during the unveiling said the flag is a symbol of United Nigeria and should send a signal of unity to all Nigerians.

He urged Nigerians to, “always remember that the flag is not a mere symbol of Nigeria, it is a symbol of a United Nigeria. Let us work together for unity and love in the country.”

Pa Akinkunmi designed the Nigerian flag in October 1959, when he was barely 23.

Speaking at the unveiling of the world’s largest flag, Akinkunmi, now 85 years old, said the journey to creating Nigeria’s national flag started when he was studying Electrical Engineering at Norwood Technical College in London.

He said: “I have always dreamt about Nigeria being at the front of every good thing and I am delighted to be part of this historical event.”

The unveiling was attended by members of officers of the Nigerian Army led by the Chief of Defense Staff, General Irabor; Pa. Taiwo Akinkunmi’s family members; Nigerian music artiste, Timi Dakolo, among others.