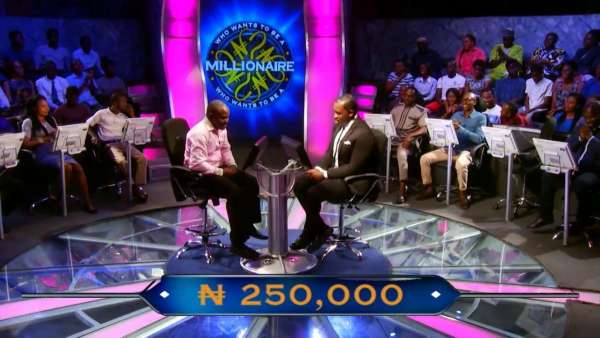 After a four-year break, ‘Who Wants To Be A Millionaire (WWTBAM)‘, the highly acclaimed TV game, is set to return to Nigerian screens in its usual but educative way.

Before the hiatus, the show which uninterruptedly aired for 13-years (between October 8, 2004, and June 25, 2017), thrilled its audience with exciting and didactic weekly editions that were dominated by a deep wealth of knowledge.

The millionaire game show, which involved so many intricacies and twists, had a grand prize of N10 million which was only won by Aroma Ufodike in 2009.

But according to the organisers of this year’s edition, N20 million will be up for grabs weekly as participants strive weekly to go home with the grand prize.

WWTBAM will retain its many twists, which include the lifelines: ’50/50′, where the computer eliminates two random wrong options, leaving the right option and the other remaining wrong option.

‘Phone a Friend’, where the contestant has 30 seconds to call one of their friends; and ‘Ask the Audience’, where audience members use touchpads to designate what they believe the correct option to be and the percentage of the audience choosing each specific option is displayed to the contestant.

Speaking on the return of the show, Hakeem Condotti, CEO of BLK HUT media, the licensee and production house, said the desire of the organisers is to deliver creative, intelligent, and professional content that will show range and capacity.

He also said the production company is proud to bring “international quality content” to the screen of Nigerians.

Condotti classified the return of the show as a part of “COVID-19 relief that we all need as a nation.”

“As a company, our desire is to continuously deliver creative, intelligent and professional content to the market for the people and partner brands; and in the production of a brand with WWTBAM stature, we are able to show our range and capacity to this effect,” he said.

“We are proud to be bringing international quality content right to our screens again in Nigeria, be it on TV, Digital, Cable, or Mobile. As part of the much-needed Covid relief that we all need as a nation, WWTBAM is back to entertain, educate and once again, have viewers on the edge of their seats and creating millionaires every week!.”

The date of the latest edition is yet to be announced.

It is also yet to be seen if Frank Edoho, TV personality, will return as the host of the show.

The 49-year-old filmmaker had hosted the show for 13 years before he resigned on September 2, 2017, after failing to agree on terms with Ultima studios, the producers of the show at the time.