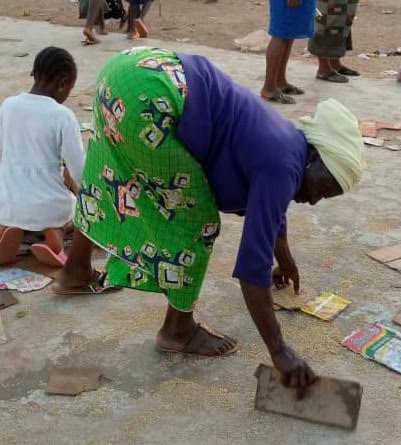 COVID-19 has been a mixed bag for Nigerians – while some have lost their lives or lost loved ones, others have improbably seen their living conditions change for the better than before the onset of the pandemic in Nigeria in late February. Mrs Maureen Sento is one of those whose lives were somehow changed for the better due to the virus as steps are taken to address its spread.

Mrs Sento, an indigene of Kagoro, Kaduna State, married to a man from Plateau State with eight children (five male and three female), was, before the advent of COVID-19, sold the local energy drink known as ‘Jiko’ in Northern Nigerian dialects. She supports her husband, a ‘maiguard’ (security guard) at a private school in Kaduna, with the proceeds of the business.

Like many women in the lower-income bracket, she depends largely on her two eldest sons for financial support.

Unfortunately, sometime in 2019, the two eldest sons who were the breadwinner of the family died mysteriously within three months.

The remaining six are not gainfully employed to contribute to the family finances. The last child, Jennifer, has finished her secondary education and would like to proceed to the university.

Analysis by the Central Bank of Nigeria(CBN) has revealed that 55.1 per cent of the financially excluded population are women, with 61.4 per cent of that population within the ages of 18 and 35 years, 34.0% having no formal education, and 80.4% residing in rural areas.

Mrs Sento’s status came to the public knowledge on Monday, April 6th, 2020, when she joined a multitude in her area to struggle for the poorly organised distribution of palliative food items at Narayi Primary School.

After waiting and struggling for hours at the venue of the distribution, she decided to see whether any of the items being flung to the crowd by the handlers would spill on the ground.

She sighted pieces of spaghetti on the ground and decided to settle with them – just to get something to cook for the family that afternoon. She was not concerned about the health implications of her action.

The Kaduna State Government had distributed foodstuffs in nine out of the 23 local government areas of the State to cushion the effect of COVID-19 stay-at-home order.

The picture of her gathering the spaghetti from the ground has gone viral and attracted spirited Nigerians and groups.

Apart from individuals who have reached out to her in cash and kind, others are still working on a sustainable wealth creation project for her.

One of such groups is Kaduna-based NGO Kunak Foundation. After reading about Mrs Sento on social media and Gobroadsheet.com, the group decided to assist her.

Speaking on behalf of Kunak Foundation when members visited her on Wednesday, April 15th, Manto Bala, said, “though we know we have so many needs around us, her case was a peculiar one that requires immediate attention.”

According to Bala, “at Kunak Foundation, we care for the widows. Each member of the Foundation has the responsibility of locating a widow in need every month.

“Every first Saturday of the month, we visit such a widow to see where we can be of help – clean her house, wash all her clothes, make her over, cook and eat there as one family.

“We got to hear of her story through social media from where we picked an interest. We felt for her. We sympathise with her and now, we are empathising with her. We know many people are suffering. But, her own case is the heart-breaking one seeing her picking scattered crumbs in public.

“We are backing that feeling with action today with a bag of corn, a bag of rice, a bag of beans, a bag of salt, a carton of seasoning, 10 litres of groundnut oil, 10 litres of palm oil, a grinding, creams, toothpaste, soaps, and five pieces of wrappers for her to wear”, he detailed.

In her response, an excited Mrs Sento said, “I’m grateful for many people who have identified with me and my family. Some that I don’t even know brought foodstuffs, called and promised to do one thing or the order.

“Already, I have it in mind to sell grains to sustain me. I will start with what you have brought today. I still solicit for more help so I can also give back to the society if I am well established”, she said.

A professor of Criminology and Gender studies at the Kaduna State University, Hauwau Evelyn Yusuf, supported Mrs Maureen’s idea of opening a business to sustain her family.

To her, ”I believe that with what she has, she could start up a milling point as well as engage in small scale poultry where she can raise birds for sale.

“All she needs is to construct a cage in her compound. The milling and food store will bring in daily income while the poultry or fish pond will bring in periodic income with which to sustain the store,” she suggested.

NGOs and civil society have a long history of lifting up people from poverty either through capacity building training or financial supports, hence, the possibility of seeing same coming to play in the case of Mrs Sento.

Women Connect Initiative (WCI) has in a few years identified women with empowerment needs and offered them business training and set-ups.

Helen Audu, a 39-year-old widow living with her 7 children in Jan-Ruwa, Chikun local government area of Kaduna State, is one such beneficiaries.

She used to sell a local delicacy called ‘waina’ which was not profitable enough to sustain her family until WCI came to her aid with additional foodstuffs to expand her business which is now enabling her to return her children to school.

To this end, women like Mrs Maurine Sento, in addition to material and financial donations, need business coaching from reputable mentors in order to be able to sustain the business, manage home and become included in the financial flow in the Nigerian micro-economy.