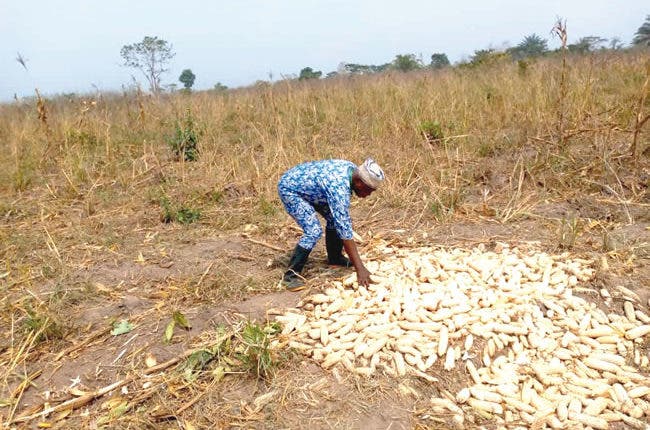 YOMI AYELESO reports that farmers in Ekiti State are recounting their woes following the latest invasion of farms by suspected herdsmen where crops worth millions of naira were destroyed.

A short while after the popular Akure meeting between governors in the South-west and the leadership of the Miyetti Allah Cattle Breeders Association of Nigeria (MACBAN) on how best to end the wave of crimes in the zone, suspected herdsmen allegedly struck in Ekiti State as crops in different farms in the state were destroyed while feeding their cattle.

While many of the farmers counted their losses, worst hit in the latest destruction were members of the state chapter of Maize Growers Processing and Marketers Association of Nigeria (MAGPAMAN). Members of the association had in September 2020 approached the Central Bank of Nigeria (CBN) for a loan worth over N66 million under the Anchor Borrowers’ Programme for maize plantation. About 235 hectares of farmland located in Aduloju farmstead along Ado-Ijan road in Ado Local Government Area of the state were affected.

‘We have been left with nothing to harvest’

The state secretary of the association, Mr. Tope Emmanuel told Nigerian Tribune that the herders had been terrorising the farmers in the last three weeks without hindrance leading to the destruction of the maize farms. He explained that the pastoralists stormed the farms at night with dangerous weapons to feed their cows and “all efforts to stop them have not been successful as they chased away our security guards with dangerous weapons.”

While disclosing that the N60.8 million loan obtained from the CBN in 2020 was channeled towards planting the maize, he added that the 160 members had been left with nothing to harvest from the expected proceeds of over N400 million.

According to him, “Last year, we approached the CBN as a group to obtain loan worth N60.8 million for the maize farm and we planted maize covering 235 hectares of land the farm.

“But unfortunately when we were preparing for cultivation, the herdsmen came and destroyed everything on the farm with nothing for us again. Those herders always go there during the night with dangerous weapons and nobody can challenge them because of the arms they hold. We can’t go to the farm now.

“The destruction of this farm has put us in a difficult situation. In fact, there is no way we can describe how much this has affected us. Personally, this destruction has affected me so much; it devastated me. The farm was my life. I feed and pay bills from farming. Apart from affecting us, the farmers, it has also demoralised the young ones who are interested in farming.”

Emmanuel pleaded with the state government and other stakeholders to come to their rescue.

Another farmer, Mr. Adekunle Falana whose farm was also affected disclosed that the herders overpowered the security guard on the farm and fed their cows with the crops.

Falana said “We engaged the services of five hunters to guard the farm pending when we would harvest, but the herders came at night with guns. The hunters could not face them and ran for their lives while the cattle feasted on our crops all night long. I collapsed. I was taken home. I could not walk again that day. People took me into the car and drove me home because I was shattered.”

Speaking on his expectations on the maize farm before the destruction, he added that “they told us that the seeds given to us are high-yielding seeds. They said the seeds would give us eight tonnes of maize per hectare if we paid proper attention to the farm and followed necessary rules. I had dreamt of prosperity because CBN would take only two tonnes as repayment for the loan.  The profit margin was high, which was the remaining six tonnes – two tonnes per hectare. That was why we stayed on the farms and toiled with our all might. I have no other job.”

In this same vein, Mr Audu Sani said that his cassava and yam farms worth over one million naira were destroyed by the herders, calling on the state government to come to his rescue “because loans were taken to invest in the farming business.

“You can’t just see that kind of farms nowadays without huge investment and I got loan to put the cassava and the yam farms together hoping to harvest and pay back. As it stands, I am in serious debt because insurance only covers natural disasters; herdsmen invasion is not natural disaster.

“The last three weeks have been very tough even in my colleagues’ farms, as most of us suffered in the hands of these criminal herders. I want government to do something in this regard at least to assist us in whatever means, because we are indebted already.”

To Saliu Nasir, his loss could not be quantified considering his efforts and commitment in the last few months in his cassava farm which was completely destroyed by the herders. He pleaded with the government and other stakeholders to find lasting solutions to the recurrent destruction of farms in the state, noting that many residents interested in going into full time farming were beginning to have a change of mind

According to Nasir, “You know cows love to eat cassava and these herdsmen will come to our farm virtually every day in the last three weeks to feed their cows with it until they completely destroy the farm. The challenge we had was that had it been they came in the afternoon, we could have found a way to stop them but they go there at night and chase away our guards.

“It is now that government must do something to resolve it not only condemning it because people are losing lives and of course money they invested in the farms. It is not a good omen for people who are planning to go into farming seeing what is happening to us now at the moment. Considering the economy, nobody will want to just invest in something without any form of gain at the end of the day. “

I am a victim; no need to play politics with the menace—Cleric

The founder and presiding cleric of the House of Faith Christian Church, Ado-Ekiti, Reverend Tunde Afe who is a farmer noted that his cassava farm was destroyed by herdsmen in Itapaji-Ekiti, Ikole Local Government Area of the state.

Afe, a former governorship candidate in the state, cautioned leaders who are playing political correctness with the security situation in the state, adding that the lives and property of residents should be the priority of government at all levels.

According to him, “It is wrong for some people to say no single farm has been destroyed in Ekiti by Fulani herdsmen. Please don’t play politics with this issue. These herdsmen destroy farms in Ekiti every day. For example, a section of my cassava farm at Itapaji-Ekiti was eaten up by cows last week. Farmers have stopped reporting to police because nothing has come out of all the reports made so far.”

It was drought, not herdsmen, that destroyed affected farms—Ekiti govt

The Commissioner for Agriculture, Dr Olabode Olatoyi disclosed that he visited most of the farms allegedly destroyed but noted that it was drought that affected large parts of the crops, not herdsmen.

“I have been to the farms and I observed everything in the place. It was the weather which affected the farms and even if it was not the weather, what they can realise as return cannot be up to one million naira; there is no multi-million naira farms that herders destroyed,” he told Nigerian Tribune.

He revealed that the government would commence the registration of herdsmen as part of measures to tackle clashes between herders and farmers and the growing insecurity in the state.

He said the registration would afford the government full details and would enforce the decisions reached at the Akure meeting on ban of under-aged and night grazing.

To further achieve peace, he revealed that the government has inaugurated a special herders- farmers’ peace committee which would be coordinated from the ministry and ensure regular interface among the stakeholders.

According to him, “Apart from the decisions from the Akure meeting, we have added another one in Ekiti that nobody can graze on government land again in the state, like farm settlements, farm centres, forest reserves and  dedicated lands for agriculture. It is now illegal in Ekiti State.”