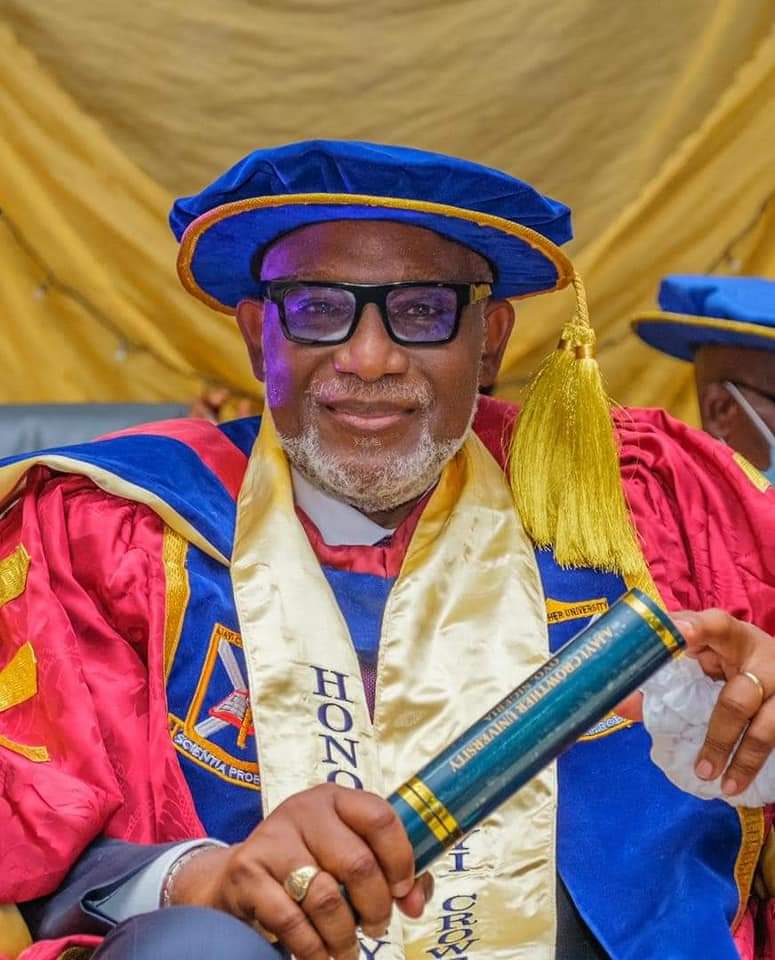 Ondo State Governor, Arakunrin Oluwarotimi Akeredolu, SAN, has said that institutions of higher learning in the country will only be relevant when they start producing problem-solvers and not just certificate holders.

Governor Akeredolu said the hollow repetition of outdated and inapplicable theories which are taught in the institution of learning will only produce highly certificated citizens who lack capacity to solve basic problems.

The Governor declared that all true centres of learning must not be quiet at this crucial moment in the country, adding that “We live in a period when the interventions of true intellectuals are needed to illumine darkened paths.”

Governor Akeredolu was also conferred with an award of Doctor of Laws (Honoris Causa) of the University.

He was accompanied to the event by his wife, Chief Betty Anyanwu Akeredolu. 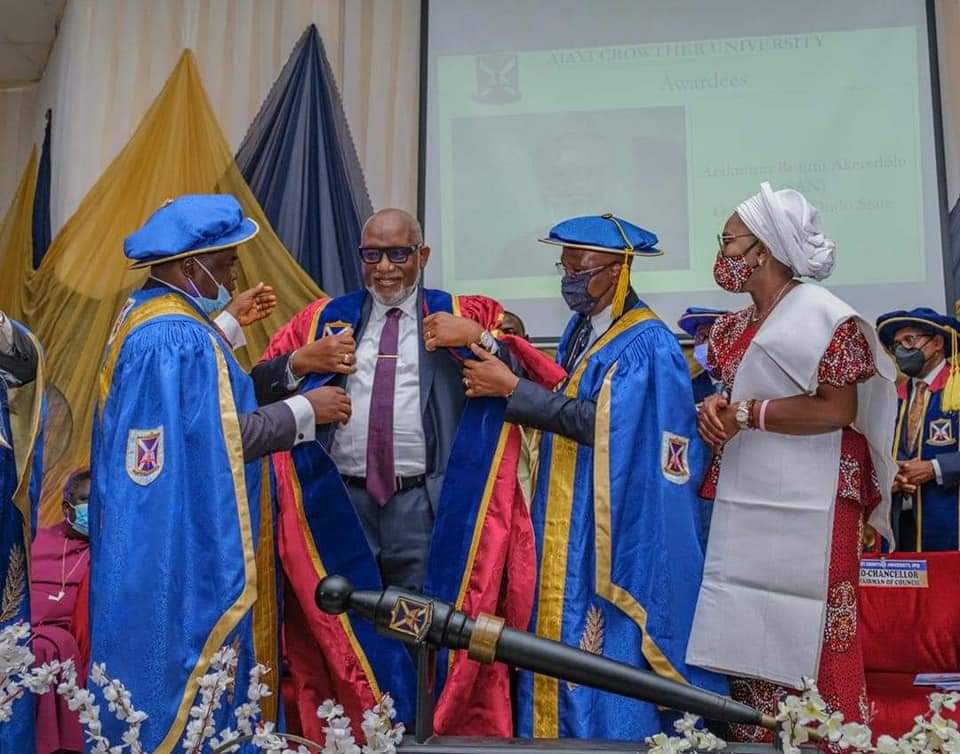 Other dignitaries on the Governor’s entourage included Minister of State for Niger Delta Affairs, Senator Tayo Alasoadura; Oba Fredrick Akinruntan Obateru, the Olugbo of Ugbo land; Chairman of the All Progressives Congress (APC) in Ondo State, Engr. Ade Adetimehin; members of the House of Assembly led by the Speaker, Rt. Hon. Bamidele Oleyelogun; President of the Customary court of Appeal, Hon. Justice Eunice Alade; members of the state executive council led by the Secretary to the State Government, Princess Oladunni Odu; Justice Alero Akeredolu of the State High Court; Executive Chairmen of local governments led by the Chairman, Association of Local Governments of Nigeria (ALGON) in the state, Oloruntogbe Augustine; commissioner-designates and recently appointed Special Advisers.

The Governor noted that all activities in the institutions of learning must be geared towards self-reliance, saying science must be promoted above superstitious beliefs.

“Any institution of higher learning or research centre whose focus is not on these practical means of coming out of doldrums betrays its mandate,” he said.

Governor Akeredolu tasked the academia not to be tired of educating the people on the best way possible out of the current predicament as a country.

“They must enlighten us about the concept of federalism. We must know the limits and responsibilities of states as component units in a federation.

“We should be certain of the meaning of a constitution as the basic law of a democratic country. There must not be doubts as regards political ideas such as sovereignty, legitimacy, rights and duties of citizens.

“They must educate the people to understand why all authorities must be subordinate to the people and civil service must be made to actualize this objective.

“Our centres of research and learning must be ready to come up with innovations on how best to plant our food and feed our people. We must depend on our children to fix our roads, hospitals and secure the land,” Arakunrin Akeredolu said.

He stressed that the education of a citizen is the most important assignment of the society which he said is represented by the government at all levels.

Governor Akeredolu said the challenges faced by any society must form the basis for the design of a curriculum of instruction, adding that its content must reflect the aggregate of the collective aspirations towards development.

“The current process of certification, promoted vigorously by a system which appears content churning out graduates without requisite capacity for the qualifications with which they are saddled, must be reviewed.

“Our universities must not be seen as centres of preparing young people for an ultimate carnival-like procession culminating in the award of degrees and diplomas which are a veritable embarrassment to the holders.

“Certificates are mere evidence of participation in a process. They do not necessarily bear testimonies to capacity. The disturbing reality which finds expression in the presence of multitude of unemployed graduates in an underdeveloped country should be a source of deep anxiety.

“While inadequate funding may be adduced as a factor militating against qualitative education, it is disingenuous and escapist to look away from the fundamental cause of progressive rot in the system.

“There has been a disconnect between the social realities and the pretentious emptiness served as diets of instruction,” Governor Akeredolu lamented.