The controversy trailing the corruption scandal in the Niger Delta Development Commission (NDDC) has continued to spark mixed reactions in the country.

Amid a series of drama, confrontation, and war of words, the National Assembly is investigating the allegation of corruption in the agency.

Among the latest dramatic events from the probe is the heated argument between a lawyer, Mr Monday Ubani, and the spokesperson for the House of Representatives, Mr Benjamin Kalu, during their appearance on Channels Television’s Sunday Politics.

Ubani, who is also a governance expert, and Kalu, who is also the House Committee Chairman on Media Affairs and Publicity, disagreed over the allegation by the Minister of Niger Delta Affairs, Godswill Akpabio, on the complicity of some lawmakers in the contract scam in the NDDC.

“We are waiting for them (the House) to initiate criminal prosecution against Godswill Akpabio; when they now try it, they will get to know the names of those that are there with them,” Ubani said.

According to him, the lawmakers cannot initiate any criminal prosecution or civil prosecution when the minister has names of members of the present House that have been indicted.

Ubani alleged that the annexure attached to the minister’s letter to the House contained the names of the lawmakers, including the chairmen of the Senate and House committees investigating the NDDC. 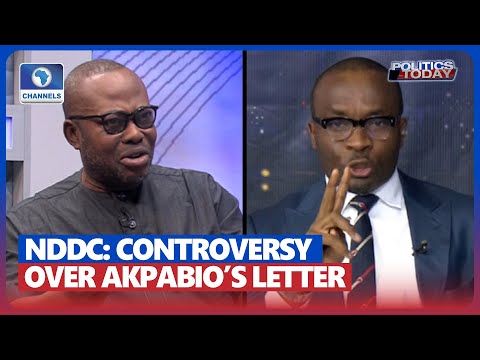 He said, “Both committee chairmen; there are other members of the House that are there, including some powerful politicians.

“Let me tell you what happened in the House. In the morning, the Speaker was saying that he had referred this particular matter to the Clerk, asking that lawyers should be engaged to initiate criminal perjury and civil defamation against Akpabio when he has not gotten the letter.”

“The moment the letter came that has this list of all the members that are implicated, remember how the Speaker ended? He said ‘this matter is now rested; I will now refer this matter to the Ethics and Privileges Committee’ which means this matter has died a natural death,” Ubani added.

In a swift reaction, Kalu who is also a lawyer, faulted the allegations by Ubani, stressing that the Akpabio had exonerated the lawmakers in his letter.

He said, “With due respect to my senior colleague, he is wasting the time of Nigerians and your airtime, what is he referring to? What I have here is a document from the minister; the original document.

The lawmaker, therefore, challenged Ubani to mention the names of the members of the 9th Assembly who constituted 60 per cent of the project of the NDDC as claimed.

He also questioned if the two members said to have been named by the minister as purported beneficiaries of the contracts constituted 60 per cent.

While he noted that he could not speak for the Senate, Kalu insisted that the name of the House Committee Chairman, Olubunmi Ojo, was not mentioned in the document.

The said document, he stated, referred to the events in 2018 and has no relevance to the probe of the agency between January and May 2020.

“It has no relevance; if we were before the court, it will not be admissible. It will be flung out of the court,” the House spokesman said.