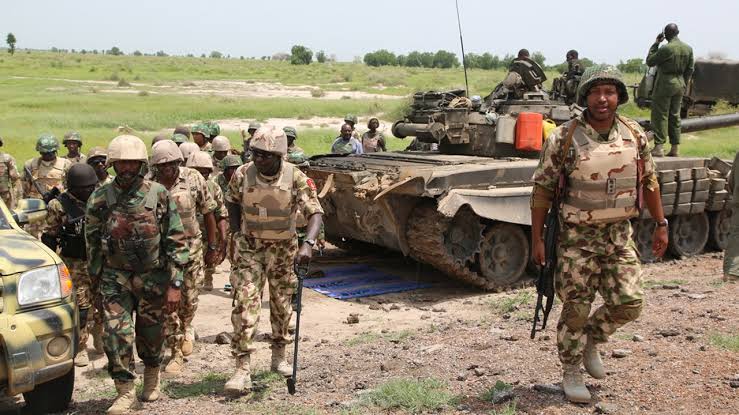 Two soldiers have been killed in an encounter with Boko Haram (BH) and Islamic State West Africa Province (ISWAP) terrorists in Borno State.

The Director of Army Public Relations, Brigadier General Onyema Nwachukwu, disclosed this via a statement.

He said the insurgents were killed at the Forward Operating Base in Gajiram Nganzai Local Government Area of Borno State on Sunday.

“The vigilant troops of Sector 3 Operation HADIN KAI supported by the Nigerian Air Force component, brought a devastating volume of fire on the terrorists while attempting to infiltrate the Forward Operating Base using Gun trucks and several other weapons,” the statement read.

“The terrorists, having suffered several human and equipment casualties as at the time of this report, retreated in disarray. Sadly, two gallant soldiers paid the supreme price during the encounter.”

Items recovered from the terrorists include 10 AK-47 rifles, one Anti-Aircraft Gun, one Shilka barrel, one 60mm Mortar tube and 61 rounds of PKT riffle ammunition amongst others.

In addition, troops also uncovered several charred remains of the terrorists along the route in the North-East region.

On his part, the Chief of Army Staff, Lieutenant Gen Faruk Yahaya asked the troops to aggressively maintain the momentum of the pursuit, until the remnants of the fleeing terrorists are destroyed.

Nigeria has been battling terrorism for over a decade with thousands of lives lost with several others displaced in the North-East.

Despite repeated claims by the military and government officials that the terrorists have been decimated, the insurgents have continued to attack security formations, schools, religious centers and kidnap people for ransom.

Two weeks ago, the military authorities confirmed the killing of the senior officer, Brig-Gen Dzarma Zirkusu and three other soldiers in a fierce encounter with ISWAP terrorists in Askira Uba Local Government Area of Borno State.

A few days after, the Army avenged the general’s death by killing more than 50 ISWAP terrorists in the recent counteroffensive in the local government.