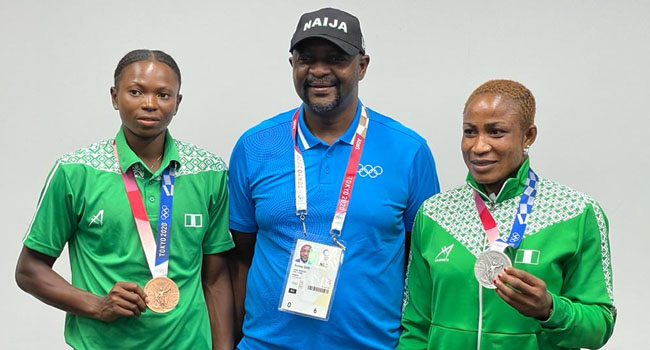 The Federal Government has rewarded Blessing Oborududu and Ese Brume with  $10,000 and $7,500 respectively for their impressive outings at the Tokyo Games.

Brume won Nigeria’s first medal in the competition on Tuesday after she finished third in the long jump event Oborududu while got silver in the 68kg women’s freestyle wrestling later on the same day.

After Brume and Oborududu gave the country something to cheer about, the ministry was quick to reward them.

“There’s no point  delaying the reinforcement of these athletes who have made the country proud,  that is the reason  they were rewarded immediately for their record breaking   performance,” the Minister of Youth and Sports, Sunday Dare said while presenting the prize to both athletes in a ceremony held at Grand Prince Hotel, Tokyo on Tuesday.

“I am just super excited and I want to say thank you to all my supporters and the Federal Government of Nigeria for the encouragement,” Oburududu said after receiving the reward.

The excited wrestler described the government’s gesture as encouraging.

The ministry had earlier explained that the move was aimed at driving “home the point that the Federal Government rewards superlative efforts”.

Oborodudu made history as the first Nigerian wrestler to win an Olympic medal courtesy of the silver medal she won in the women’s 68kg freestyle.

Brume’s medal was the first to be won in track and field since 2008 at the Beijing Olympics where Blessing Okagbare and the women’s 4x100m relay team won a silver medal each.