To Be More Than Conquerors, Be Heaven Conscious- Bishop Odedeji 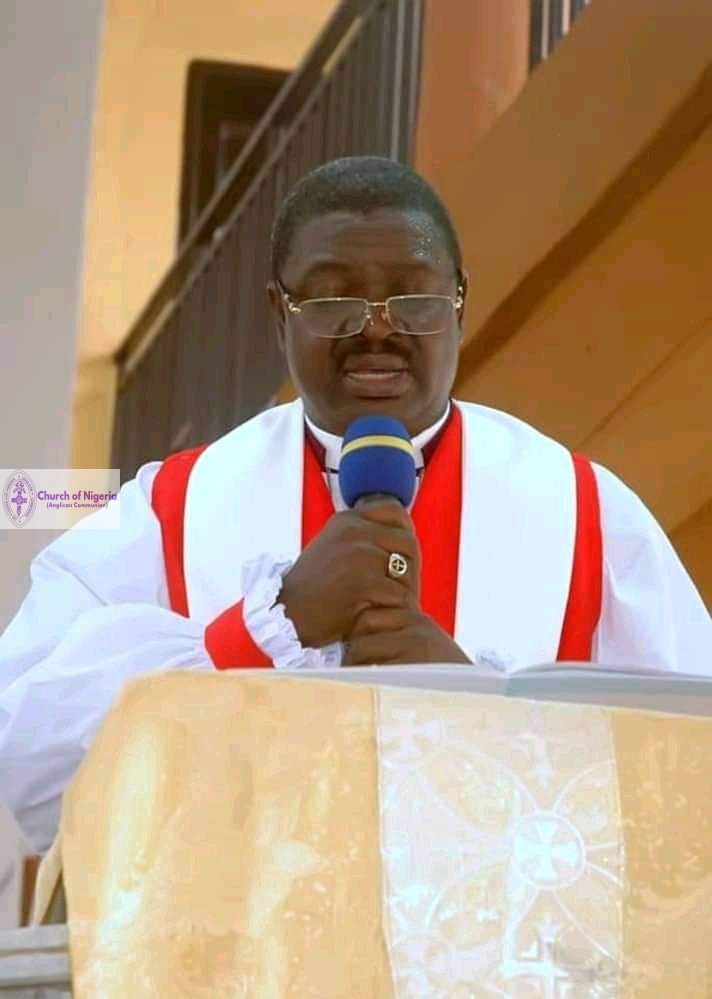 To an Anglican Diocese, the Synod is like the Annual General Meeting of a public quoted company.  The preparation is even more extensive and rigorous, involving the material, financial, physical and spiritual components. 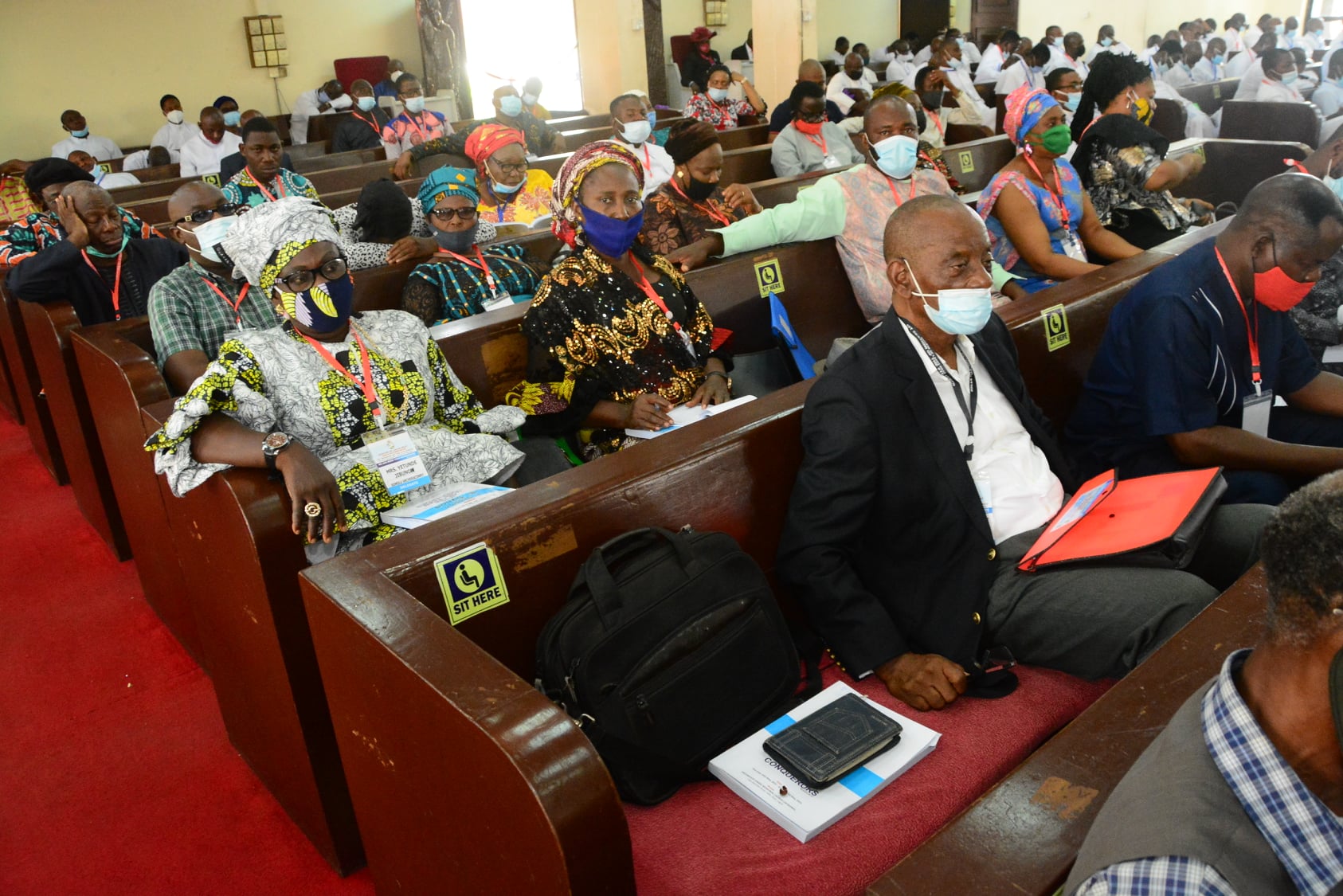 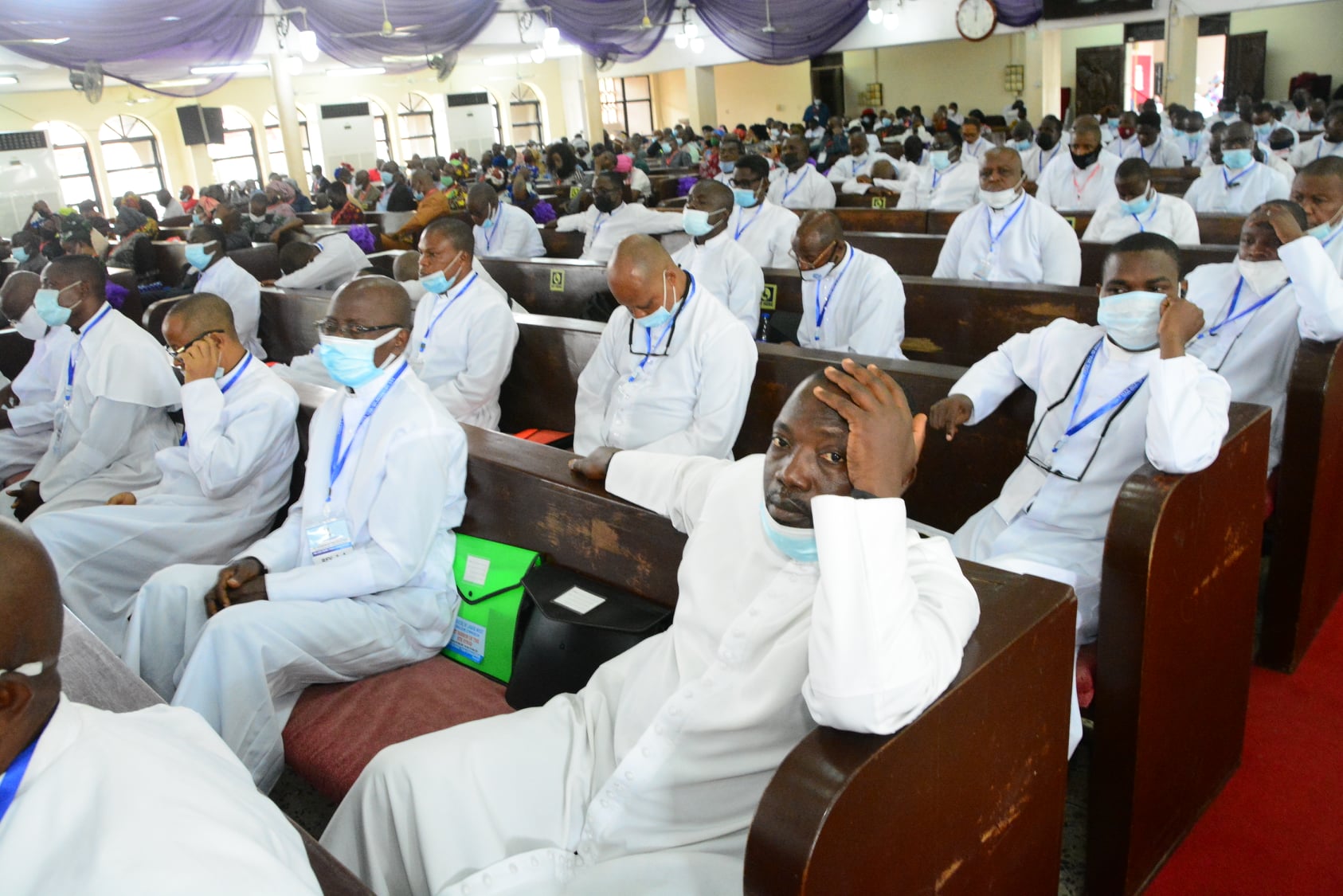 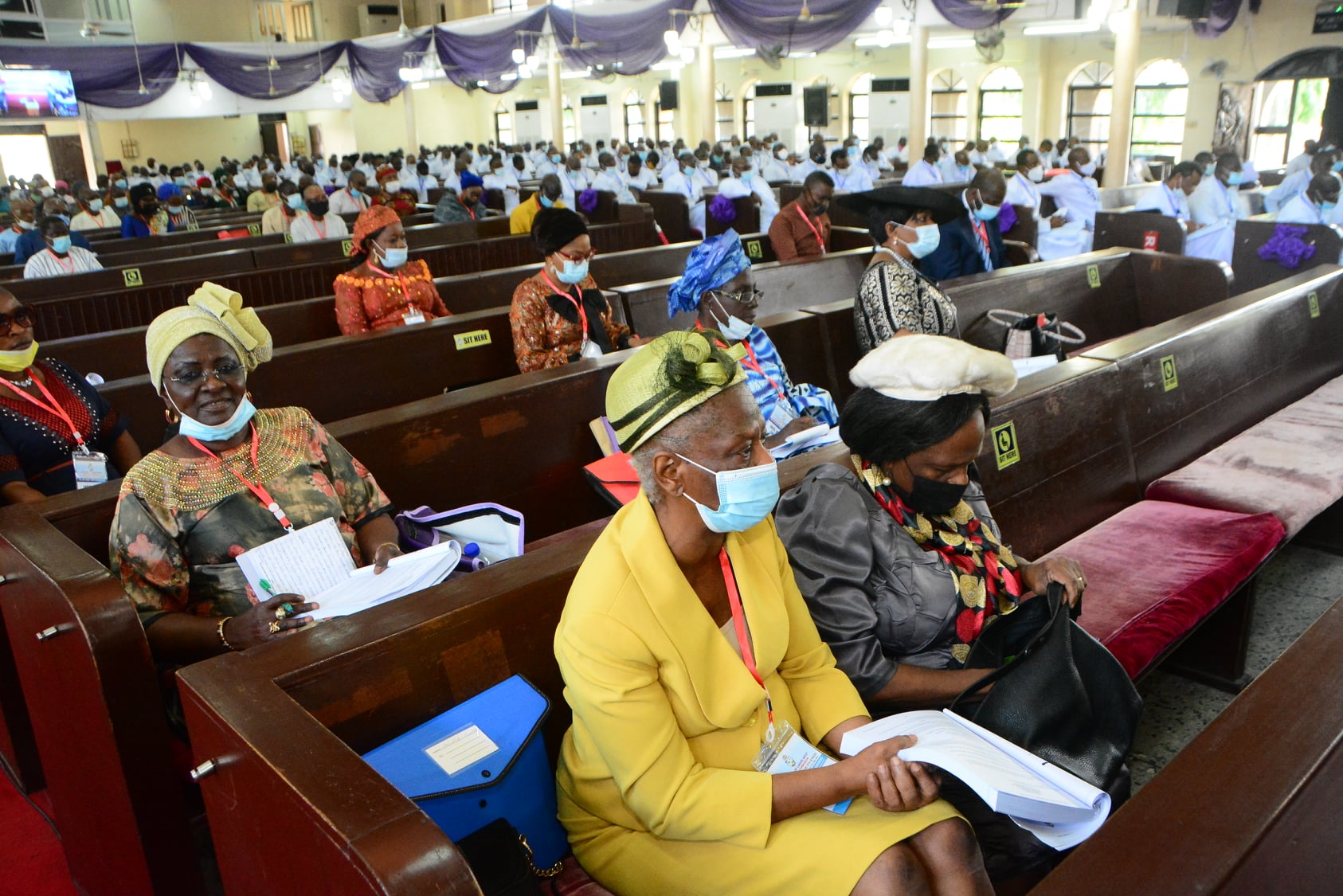 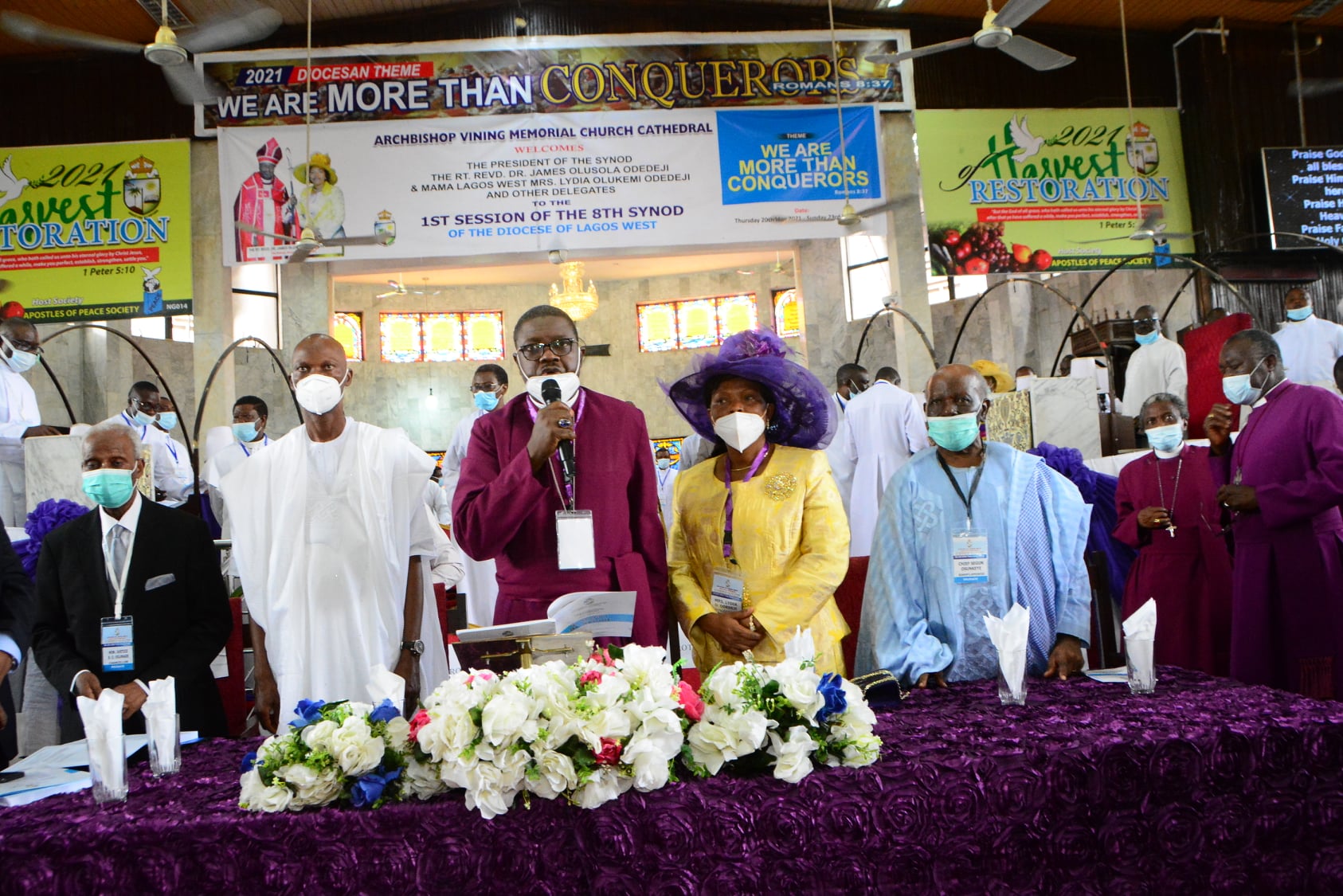 The main highlight of any Synod is the Bishop’s Charge that brings an overview of the development in the Diocese over the previous years, the challenges faced, godly plans and the mind of the Bishop on contemporary development in the country. One would therefore expect that the Bishop would have been wearied by the various activities to withstand delivery of a two-hour address. But not the Rt. Revd Olusola Odedeji, Diocesan Bishop of the Diocese of Lagos West by Divine Permission for the past eight years. He had so much to say and had the energy to remain eloquent and strong for the duration of delivering the loaded Charge.

The Bishop spoke from the heart like a concerned father who could not bear seeing his children suffer needless amidst plenty as is the lot of Nigerians today. As would be expected, at the heart of the Charge was a frown at the level of insecurity across the country. It was not lost on the Lord Bishop that Nigerians live in unusual times when all things are not normal, when, in the North east there is insurgency, banditry in the North West, general attacks by killer herdsmen in all other parts of the country, rampant kidnapping for ransom, inexplicable killings and a free reign of anarchy threatening the unity and stability of the country.

He therefore said, “All over, the threat level is rife. It will be dangerous to allow Nigeria slide into war…whereas it is already in a war situation, even if it is not yet a full blown war. The nation is bleeding; blood is flowing here and there. People are living in palpable fear. Several factors are to blame, most of them self-inflicted. The President must clamp down on this anomaly decisively; Nigeria is now experiencing failed institutions, weakened national cohesion and hegemonic stance as fallouts of insecurity.

The conflicts between herders and farmers did not escape the attention of Bishop Odedeji. He said “some sections of the South now view the presence of armed pastoralists as a ‘Fulanisation’ plot aimed at land grabbing.  …Many farmers have been sent out of their farms leaving them jobless and further threatening the drive for food sufficiency in the country.”

The President of Synod called the attention of delegates to what he thought should be urgently done to curb the rising cases of insecurity in the land and the concomitant looming anarchy. Placing the buck squarely on President Muhammadu Buhari who is also the Commander-in-Chief of the Armed Forces, the Bishop called for the declaration of a state of emergency on security without further delay. He said this should include wholesale security reforms, and instituting necessary measures towards running an inclusive government.

He called for amendment of the Constitution to accommodate regional security outfits such as Amotekun in the South West, and Ebube Agu in the South East. To complement them, he said the situation calls for introduction of state police for all hands to be on deck towards ensuring that Nigerians sleep with both eyes closed.

In the wake of wanton abduction of school children, Bishop Odedeji said security should be tightened around them, with perimeter fencing and alarm systems installed.

And, to check the migration of killer herders and other criminal to the country, he counseled the federal government and security forces to “coordinate with neighbours to stem cross-border movement of non-Nigerian armed herders and small arms.

In the face of brick bats flying of recent between the federal and state officials, the eminent Christian leader pointed out “the need to work together; taking immediate steps to shore up security for herders and farmers, strengthening conflict resolution mechanisms and initiating long term efforts to reform livestock management practices.

A Bishop’s Charge is not only an opportunity to beam the searchlight on the state of the nation; it is also an opportunity to build up members of the Diocese through delegates. The Bishop therefore did an exposition on the theme of this year’s Synod: “We are more than conquerors”. The Diocesan explained that Christians are always engaged in wars and battles against enemies see and unseen. He pointed out the need to identify the enemy. He said a hierarchy of such enemies who he identified as Satan at the head, followed by principalities and powers of darkness, human satanic agents, sin and oppression, flesh and carnality. The Bishop identified three others- indecision, doubt and fear that he described as “the unholy trio that are closely related.”

If the exposition had stopped at that, the address would have left the delegates on a note of despondency. Bishop Odedeji said the scripture has supplied believers with weapons to fight the war. These he identified as, faith and fearlessness, He said “faith is the greatest force in the world. Faith is the basis of all miracles and breakthrough in life. Faith is the essence and anchor of Christianity. When faith in God is absolute, results are inevitable.”

Other weapons identified by the great man of God include confidence that God will give victory, obedience to divine instructions, thinking like a victor, not a victim and due deployment of the weapon of praise citing the example of Paul and Silas who used the weapon to devastating effect in jail as recorded in Acts 16: 16-40.

To be more than a conqueror, the Bishop told the flock to watch their focus closely and be heavenly focused at all times. He also said they should allow the Holy Spirit to guide them at all times as well as realize that victory is available only through the blood of Jesus as the enemy would lay charges against them, but Christ who died for them and pleads their cause with God remains their Advocate as he has paid the one perfect sacrifice.