Three Years of Archbishop Olumakaiye At The See of Lagos 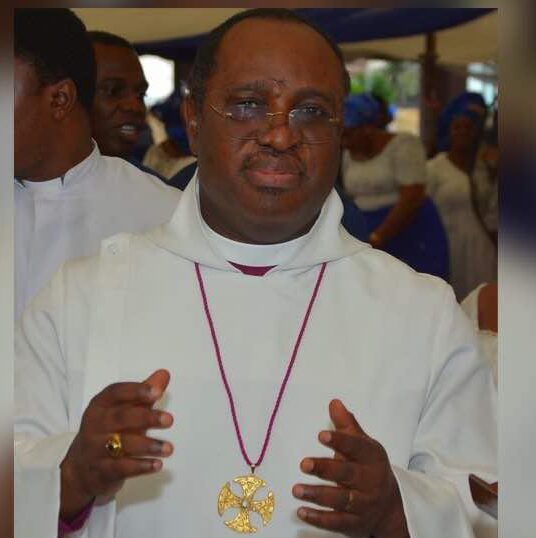 Johnson Oatman Jr. caught the true essence of human existence when he penned in 1897 the hymn with the title ‘When upon life’s billows you are tempest tossed’ and particularly the chorus ‘Count your blessings name them one by one and you will be surprised at what the Lord has done’.

We are taking stock of Archbishop Humphrey Bamisebi Olumakaiye and Professor Mrs. Motunrayo Funke Olumakaiye’s sojourn in the See of Lagos from 30th July 2018 to 30th July 2021 (Three years), and there is no doubt that every thinking man will be thankful.

It was a period when the global economy was threatened by the novel coronavirus which is still on till now. As was the case with Isaac in Genesis 26:1-5; 12-17, Archbishop Olumakaiye refused to see the problem that everyone saw, rather decided to see the God who is bigger than every problem.

We will take a summary look at some of the achievements of the Olumakaiyes in the last three years:

The Memorial (Fasting and Prayer): This is in agreement with the Lord Jesus Christ that every challenge is surmountable through prayer and fasting. This programme which is annually, calls the whole Diocese to fasting and prayer for 21 days from 1st to 21st August.

Healing and Charismatic Service: God remains the pivotal pole of the Olumakaiye episcopacy. This programme takes place monthly at the Cathedral Church of Christ, Marina, Lagos. Lots of testimonies have been received from those who attended this programme as healing and deliverance regularly takes place.

Power for the New Month: Archbishop Olumakaiye, upon resumption of office immediately increased from one day to three days, the days for prayers and fasting at the beginning of every new month.

PrayerWalk: This is a yearly walk that takes place every 1st of October from the Eleko Junction area of Ibeju-Lekki to the Centenary City of the Diocese of Lagos, located behind Pan-Atlantic University, Ibeju-Lekki Lagos. The participants are enjoined to engage God as they take the walk in the faith that He will do for them their heart desires.

Lenten Diet: This is another innovation of the Olumakaiyes regime where every Lenten Season is period for intensive Bible study in all the parishes of the Diocese.

Diocesan Yearly Theme: This formed the focus of the entire Diocese annually. This is broken down to Sunday sub-themes that are studied by all parishes of the Diocese. The themes so far are:

Divine Mandate: The Administration was very clear from the beginning that it had a Divine mandate to execute. This was broken into five broad headings namely: Priestly, Pastoral, Prophetic, Prayer and Praise. As a result of this, Divine Mandate partners were appointed to support the evangelical work in the Diocese. This Mandate also led to the formation of a more than 200 member musical group known as the Divine Mandate Voices which has been ministering effectively at Diocesan programmes since the group’s formation.

Festival of Hymns: This is a quarterly rendition of hymns, psalms and canticles by Choristers of all the Parishes in the Diocese as a part of the Divine mandate.

Episcopal Visits: Within one month of assumption of duties, Archbishop and Mrs. Olumakaiye visited all the parishes and congregations in the Diocese including those across the sea.

Centenary Anniversary Celebrations: It was the lot of Archbishop Olumakaiye to lead the celebration of the 100 years anniversary of the inauguration of the Diocese of Lagos. He was clear on his vision which was driven by desire to reciprocate the beautiful legacies left to us by our fathers by also leaving legacies for our children. He prophetically declared that we will have a minimum of 1,500 plots Centenary City at a cost of over 10 billion naira. God indeed honoured his faith and prayer which has led to the commencement of work at the city which is daily taking shape.

Street and market Evangelism: This is a programme that is led by the Diocesan himself in all parts of the Diocese.

Media Investment: Archbishop Olumakaiye has a man of vision understood that the social and electronic media are unavoidable  tools for evangelism in the new millennium. Long before the advent of the coronavirus, he began massively investing in these modes of evangelism which became very useful during the months of the lockdown. He also encouraged all the parishes to invest in these forms of media. As a result, the Diocese of Lagos became more noticeable across the popular social media platforms where the young ones and the IT compliant professionals are and this has improved communication with these groups of people.

Lagoon Radio, Lagoon Television, Lagoon.News and The Digital Billboard: The Olumakaiye episcopacy saw to the establishment of Lagoon Radio, a 24 hour online gospel radio station (www.LagoonRadio.ng) and Lagoon Television, an online TV channel, which broadcasts live and recorded Diocesan and parishes’ programmes, as well as other spiritual, educative and informative programmes. Lagoon.News is an online news blog site owned and powered by the Diocese of Lagos. They are available on all the popular social media platforms. A large digital LED board was also purchased and installed at the Diocesan headquarters to advertise all Diocesan programmes for all to see along the very popular and high trafficked CMS Bus Stop and Marina area.

Diocesan Anthem: The Olumakaiye episcopacy gave the 100 years old Diocese its first Diocesan Anthem which is a constant reminder of what the Diocese and her members stand for.

Education: This was very key in the agenda of the Olumakaiye administration. It passed on the running of the Archbishop Abiodun Adetiloye Comprehensive College to the Diocesan Women’s and Girls’ Organisations under the leadership of Professor Mrs. Motunrayo Olumakaiye. This has led not only to improvement in all aspects of the school life but also increment in enrollment by over 200 percent. A new school, Delight International Schools comprising of a Nursery, Primary and Secondary schools on a large parcel of land was purchased in the Apapa area of Lagos and added to the assets of the Diocese. Yet another school, Episcopal Anglican College has been established, with the first set of students due to resume from September 2021 for the 2021/2022 academic session at a temporary site at Aiyeteju area of Lagos, while the permanent site will be at the Centenary City, Ibeju-Lekki, Lagos.

Recently, some facilities were dedicated at Delight international Schools, Apapa to boost the quality of education in the school. These include a reception hall, Physics, Biology and Chemistry Laboratories, Basketball and Volleyball courtyards as well as Information and Communication Technology room, fully equipped with modern ICT equipments which was donated by Mr. Olumide Sofowora, SAN, the deputy Chancellor of the Diocese.

Clergy Education and Human Capital Development: Archbishop Olumakaiye decided to build on the well laid down Continuous Clergy Education program of the last administration by increasing the frequency of accessing the program and bringing in experts from within and outside the Diocese. The conviction of Archbishop Olumakaiye is that no one is useless, therefore, he is determined that all priest will participate in the administration of the Diocese in one way or the other. He increased the number of the Directorates from 32 to 50 and ensured that all the Priests serve in at least one of the Directorates.

The Centenary City: This is a fully functional, self sustaining city located on about 1,500 plots of land situated behind the Permanent site of Pan-Atlantic University, Ibeju Lekki area of Lagos State. The City grew out of the seed of prayers and commitment of all, from the young to the old, the haves and the have-not in the Diocese of Lagos.

The Low Cost Housing Estate are blocks of flats built majorly to address the housing needs of low income members of the church and has been named after General Theophilus Danjuma. The first phase of the low income housing is currently on with 3 flats of almost 40 apartments each, set to be completed and be occupied by December 2021.

The first School in the City has been kicked off in a temporary site off the city grounds and its board of Governors chairman named.

The Convention Ground is designed to be a 30,000 capacity Dome, the Games Village is to be a full fledge sports and recreational center of world standard complete with hotels and other accommodation.

The International specialist hospital, St Lukes Global Hospital, is planned to be a world-class hospital intended to boost the health sector of Nigeria. The hospital has kicked off at the Elderly Hospital site in Ikorodu lagos.

Physical Development: The Administration renovated the Diocesan Headquarters and brought it up-to-date with modern designs and amenities.

As an acknowledgment of the indelible contributions of the Ademowos to the growth of the Diocese of Lagos, Faith Plaza, a  multi-purpose, multi-structured Resource centre at Bariga, Lagos was renamed Archbishop Adebola and Mrs. Oluranti Ademowo Christian Resource Centre, Bariga, Lagos during the Centenary anniversary celebrations. The renaming was promptly followed by the building and dedication of a four story, Three Star Guest House named ‘Faith Lodge’ (check website) on the erstwhile Faith Plaza compound. Worthy of note is the complete renovation and rebranding of the massive, over 90 rooms Hope Building (later renamed Oluranti Ademowo Building). All the structures within the compound were renovated to bring the resource center to a level that it can favorably compete with similar infrastructure in any part of the world.

Nehemiah Summit: This is aimed at giving the Laity in general a greater say in the running of the Diocese as well as addressing pressing national issues as a Church. It holds as pre-Synod Conference where every member of the Diocese has an opportunity to air their views on the way forward. Leaders of the Church and country are invited to address issues. The Key-note Speaker at the last edition was the chairman of the Nigerian Governors’ forum and Executive Governor of Ekiti State, Dr. Kayode Fayemi who spoke on how to address the increasing security challenges in the country.

Emmaus Experience: This is an annual Easter Picnic at the Centenary City introduced by the Olumakaiye administration.

Church planting: Over 22 Churches have been planted in the last three years of the Olumakaiye administration. The target is to plant 10 Churches every year with a desire to ensure that every inhabitant of the geographical location of the Diocese of Lagos has an opportunity to hear the Gospel through the Diocese.

Rocks Apartments Old Peoples’ home: This was a gift bequeathed eternally to the Diocese by the Cathedral Circle. It has since been renamed the Diocese of Lagos Hospital for Elders.

Clergy and Clergy wives Christmas Get-together: This is an annual programme inaugurated to promote unity, fellowship and mutual integration across the Diocese

To cap a great 3rd year, the Diocese of Lagos hosted beautifully and successfully the Church of Nigeria (Anglican Communion) Standing Committee meeting where over 900 Bishops, Bishops’ wives, chancellors, clergy representatives and women representatives across over 170 Dioceses and affiliated Provinces and institutions visited of the Lagos.

We celebrate a highly cerebral and anointed child of God who is dodged and daring, always giving himself at a very high and consistent level to God and humanity.