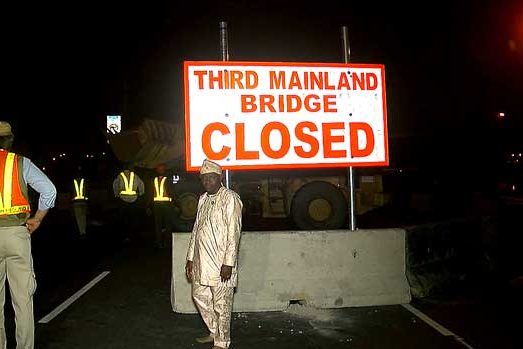 The federal government and Governor of Lagos State, Babajide Sanwo-Olu have come under attack over the closure of the Third Mainland bridge for six months.

The Federal Controller of Works in Lagos, Mr. Olukayode Popoola, announced that Third Mainland bridge will be closed likely on July 24th for another phase of repair works to begin.

Popoola said that consultations were on towards evolving perfect traffic management architecture.

The recent development has stirred reactions from residents in Lagos as they have expressed concern over traffic gridlock in the state.

Some Lagosians queried the government for taking such decisions now despite having experienced almost three months lockdown in the state.

@Akwalmoh “Why didn’t they carry out this said maintenance when the country was in total lockdown after all some people on essentials were allowed to move around.”

@Aunty_Tp “My dear governor Jide Sanwo-Olu with Eko Bridge still closed, the New Costain bridge unfinished, the type of rainy season we haven’t seen in awhile, this is not the time to close Third Mainland bridge. Surulere is going to be a total mess to get around!

@Chuchu231 “This is some real issues. The federal government will just wake up one day and announce the closure of the Third Mainland Bridge with no 1/2month prior notice. The CMS and COSTAIN routes will soon be incapacitated by the high load.”

@Fredhodut “Ahh, this is the wickedness of the highest order. Eko bridge was shut down shortly before the lockdown, up till now they never opened it. What alternatives do they give to us now? God dey oh.”

@Adenaike “I really fail to understand how we do things in this country. Most roads in Lagos are not fit to be so-called. Shouldn’t the FG give @followlasg and Sanwo-Olu time to finish the roads before closing the Third Mainland bridge? Do governments here get a kick out frustrating the people?

@NiceObum “Ikorodu road to the island is partially closed from the stadium – it won’t help the situation to have both arteries closed.”

@Realanswerscom “A frustrated government, frustrating citizens with their inability to deliver quality leadership.”

@Susandamsel3 “Lagos is about to be crazy, why didn’t they do the work during lockdown naaa?

@Ekensmadus “The challenge with leadership in Africa is the refusal to heed to the voice of the people! How do you close down 3rd Mainland Bridge when other access roads are in their current state? Is this closure really in our interest? Have we thought of the pain many will go through?

@Dammy_Sinzu “Eko bridge from alaka end has been closed since March with nothing done so far and 3MB is about to witness same. I’m sorry for this country.”