Kaduna State government has reacted to the Nigeria Labour (NLC) protest which has resulted in a power outage, shut down of the airport, and fuel queues in various parts of the state.

In reaction to the protest, the Head of Service in Kaduna State, Baritu Mohammed told Channels Television that the protesting workers are sabotaging economic activities in the state.

She added that the Kaduna State government will not hesitate to use Trade Union Act which prohibits strike by essential workers against the protesters. 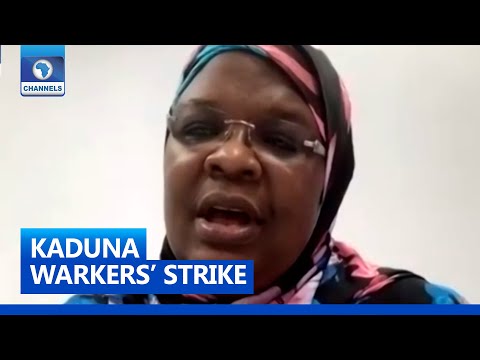 “What is happening now in Kaduna is not an industrial action but a campaign of social and economic sabotage. Kaduna State government is functioning despite illegal attempts to lock our offices, hospitals, and schools. The schools are opened, our offices and hospitals are opened.

“NLC is aware that inflicting pain on citizens, locking hospitals and public institutions, shutting down electricity will not change or affect the decision of Kaduna State government.

“It will not change the intention of the Kaduna State government to use Trade Union Act which prohibits strike by essential workers,” Mohammed said.

The HoS also claimed that NLC leadership are forcing workers to join the protest noting that some fuel stations were threatened by the NLC Leadership.

Meanwhile, National NLC Chairman, Ayuba Wabba, during the protest, said due process was not observed in the recent disengagement of the workers from the Local Government Service, State Universal Basic Education Board (SUBEB), and Primary Health Care Agency.

He added that all the unions including Student Unions and pensioners are part of the protest as they are all directly affected by the disengagement of workers.

In solidarity with the protest by the NLC, aviation workers have shut down operations of Kaduna International Airport (KIA).

The workers, under the aegis of the National Union of Air Transport Employees (NUATE), Association of Nigeria Aviation Professionals (ANAP), and National Association of Aircraft Pilots and Engineers (NAAPE), said the airport would remain shut for the period of the warning strike.