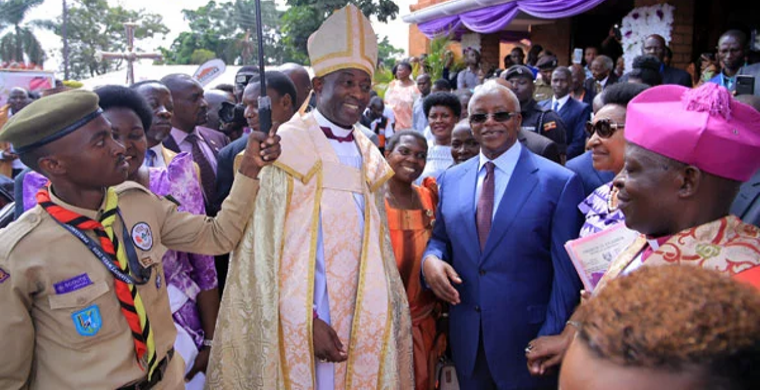 The Most Rev. Stephen Kaziimba Mugalu was enthroned as the 9th Archbishop of the Church of Uganda on Sunday, 1st March, at St. Paul’s Cathedral, Namirembe.

More than 3,000 people attended the colourful ceremony, including His Excellency the President, political leaders, the Nnabagereka and Katikkiro of Buganda and other cultural leaders, business leaders, and all the Bishops of the Church of Uganda.

The President of the Republic of Uganda, Yoweri Kaguta Museveni, attended the function and addressed the gathering. He commended the Church of Uganda for its growing infrastructure, especially the Janani Luwum Church House. He appreciated the uniqueness of Christianity over African Traditional Religion through the resurrection of Jesus Christ from the dead and the hope of resurrection for those who trust in Jesus Christ. He also explained that the unconditional forgiveness through Jesus’ death and resurrection is better for Africa than the cycle of revenge that is so much a part of African Traditional Religion.

Greetings were brought by Anglican representatives from global regions — The Most Rev. and Rt. Hon. Justin Welby, Archbishop of Canterbury and Primate of All England, brought greetings from England, the UK and Europe.

The Most Rev. Miguel Uchoa, Archbishop of the Anglican Church in Brazil brought greetings from the Americas.

The Most Rev. Laurent Mbanda, Archbishop of Rwanda and Vice-Chair of the Gafcon Primates’ Council, brought greetings from Africa.

The preacher for the service was the Most Rev. Foley Beach, Chairman of the Gafcon Primates’ Council and Archbishop of the Anglican Church in North America. Preaching from John 20.19-31, Archbishop Beach noted that the first thing the risen Lord Jesus did was to commission his disciples by saying, “As the Father has sent me, so I am sending you.”

Jesus came to us, he said, in Incarnate Love, Servant Love, Sacrificial Love, and Steadfast Love. He concluded that Jesus is commissioning Archbishop Kaziimba — and all Christian leaders — in the same way. As the Father sent Jesus, so Jesus is sending the new Archbishop in this new ministry.

The Most Rev. Stanley Ntagali, retiring Archbishop, handed over the Provincial Staff to Archbishop Kaziimba, thus symbolizing the transfer of spiritual authority from one Archbishop to another. Archbishop Kaziimba was then seated in the Primatial Chair at St. Paul’s Cathedral, Namirembe.

The enthronement service combined the singing of traditional Anglican hymns with spontaneous outbreaks of Tukutendereza, the traditional hymn of the East African Revival.

In his Charge, the new Archbishop laid out the priorities for his term as spiritual leader for the Church of Uganda. Quoting from Jeremiah 17.9-10, he called for a full conversion of head, heart, and hands. He committed himself to fulfilling Vision 2025, the Church of Uganda’s strategic plan whose mission is “to proclaim the Gospel in accordance with Christ’s commission to make disciples of all nations.” “When we do this,” he said, “then I believe we will see our vision fulfilled. We will see the Church of Uganda become “a faster growing sustainable Christ-centred church.” He said he would emphasize Marriage God’s Way, mentoring boys as well as girls, and launching a Church of Uganda TV station.

The Church of Uganda is, in fact, concerned about the Archbishop of Canterbury’s support for homosexuality and same-sex unions. He has consecrated a gay Bishop in England, invited gay and lesbian Bishops to the upcoming Lambeth conference, and promotes the recognition of same-sex unions in the church, schools, and society. These are some of the differences he alluded to in his greetings. For these reasons, the Church of Uganda House of Bishops will not be attending the Lambeth Conference.

Nevertheless, the presence of the Archbishop of Canterbury represented the appreciation the Church of Uganda has for the British missionaries who first brought the Gospel to Uganda, and the respect the Church has for the historic roots of his office.

On behalf of the President, the Speaker of Parliament, the Rt. Hon. Rebecca Kadaga, concluded the service by launching Archbishop Kaziimba’s new book and also presented him with a new car to facilitate his extensive pastoral ministry in the country.

The Rt. Rev. Stephen Kaziimba Mugalu was elected the 9th Archbishop of the Church of Uganda during a meeting of the House of Bishops on 28th August. Bishop Kaziimba was consecrated Bishop on 26th October 2008 and served as the Bishop of Mityana Diocese for over eleven years.

The retiring Archbishop, the Most Rev. Stanley Ntagali, has served as the 8th Archbishop of the Church of Uganda since his enthronement on 16th December 2012. He has served with distinction for more than seven years; consecrated 23 new Bishops and launched three new Dioceses. It is under his leadership that Church House was finished and dedicated to the glory of God.

The previous Archbishops of the Church of Uganda have been the following: