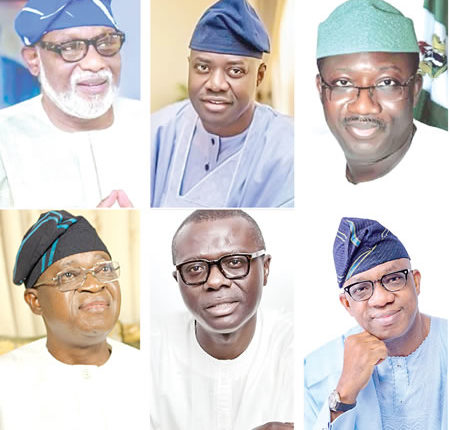 The six governors of the South-West states met in Abuja on Tuesday with members of the House of Representatives and senators from the zone.

The meeting was held behind closed door.

Speaking with newsmen at the end of the meeting which lasted over two hours, the governors and federal lawmakers jointly resolved to present a common position as regards the amendment to the 1999 Constitution.

Akeredolu, who read the communique, told newsmen that the meeting resolved to set up a committee made up of senators led by the Senate caucus chairman and House of Representatives caucus chairman, with attorneys-general of the SouthWest states.

The committee is to harmonise the position of the governors and the lawmakers, so as to present it when necessary before the two chambers of the National Assembly. Earlier before the meeting, Governor Akeredolu had disclosed that issues set for discussions included gender equality, federal structure in governance and fiscal decentralisation, state police, among others.

Members of the House of Representatives from the 17 southern states on Tuesday unanimously and unequivocally endorsed the resolution of the Southern Governors’ Forum on the resolve that the next president of Nigeria should emerge from the Southern region.

The caucus’ position was contained in a communiqué issued by its leader, Honourable Victor Nwokolo, who doubles as chairman, House Committee on Banking and Currency. “This resolution by the Southern governors reinforces our stance, as federal lawmakers, that our nation must and should exist on the pillars of justice equity, fairness, peaceful co-existence and mutual respect, particularly in the political, economic and structural management of our national diversity.

“We note that the demand that the next president of Nigeria should come from the southern region unambiguously represents the opinion of majority of Nigerians across board, in tandem with the already established rotation of presidency position between southern and northern Nigeria.

“Furthermore, against the backdrop of our commitment towards free, fair, credible and transparent elections, the members of the House of Representatives from the South also back our governors in rejecting the moves to outlaw the electronic transmission of election result in the Electoral Act, as well as the confirmation of exclusive jurisdiction in pre-election matters on the Federal High Court.

“On the Petroleum Industry Bill (PIB), the Southern members of the House of Representatives also back our governors in rejecting the proposed 30 per cent share of profit for the exploration of oil and gas in the basins.

“We also reject the moves to vest the ownership structure Nigeria National Petroleum Company (NNPC) in the Federal Ministry of Finance and support the governors in their resolve that such should be held in trust by Nigeria Sovereign Investment Authority (NSIA) since all tiers of government have stakes in that agency,” the communiqué read in part.

Governor Samuel Ortom of Benue State has backed the decision of Southern Governors Forum to enact laws to ban open grazing of livestock in the region as a bold and patriotic move that will bring to an end the lingering crisis caused by armed herdsmen.

Governor Ortom applauded his counterparts in Southern Nigeria for backing their May 11 Asaba declarations against open grazing with the resolve to legally prohibit nomadic cattle rearing; a resolution which conforms to the global best practice of animal husbandry.

According to the statement issued by his Chief Press Secretary, Terver Akase, Ortom also commended the forum for its position on rotation of the presidency between the North and South, beginning from 2023.

The statement read in parts, “Governor Ortom believes that only equity, fairness and justice can strengthen the unity of Nigeria, give all citizens a sense of belonging and reduce tensions across the country.

“The governor re-echoes his call on the Federal Government to respect the 1999 Constitution (as amended) regarding fundamental human rights, the rule of law and federal character.

“He restates his commitment to speaking out against injustice and quotes Reverend Martin Luther King, Jr. who stated that ‘Our lives begin to end the day we become silent about things that matter.” Ortom, however, reaffirmed his belief in Nigeria’s unity and expressed optimism that the country would overcome its current challenges and emerge stronger as a great nation.

Northern Elders Forum (NEF) rejected the position of the Southern governors that the 2023 presidency should be zoned to the southern part of the country.

The forum maintained that the region should not be compelled to accede for a democratically elected office that can be sought by any person irrespective of where he comes from. The position of NEF was coming barely 24 hours after the southern governors insisted the South must produce the next president in 2023.

The forum’s position was made in a statement by its Director of Publicity and Advocacy, Dr Hakeem BabaAhmed. NEF said as far as the North is concerned, the idea that it would be threatened, intimidated or blackmailed into yielding an office which ought to be settled democratically is not acceptable.

Thus the NEF sees the decision of the southern governors as an expression of sentiment that could be best discussed within a political process.

“We are running a democratic government and decisions over where the next president comes from are basically decisions that will be made by voters exercising their rights to choose which candidate best serves their interest,” it said.

I will contest 2023 presidency — Yarima

Former governor of Zamfara State and chieftain of the All Progressives Congress (APC), Senator Ahmad Sani Yarima has said he remains committed to his 2023 presidential ambition.

He made the declaration on the heels of the resolution of the Southern Governors’ Forum which met on Monday and demanded for power shift to the South. Speaking in Abuja with newsmen, Senator Yarima said he would not shelve his ambition since there is no provision for power shift in the Nigerian Constitution and the APC Constitution.

He said: “Nigerians should know that democracy is democracy. We are not the one that brought democracy; there is nothing in our constitution that talks about moving power from one place to another. Every Nigerian, according to the Nigeria constitution, unless it is amended, has the right to aspire to any political office once he is qualified.”

On the insinuation of power tussle in Zamfara State chapter of the APC arising from the defection of the state governor, Bello Matawalle, the former governor said the party Constitution is clear on the leader of the party.

He urged his colleagues to defer to Governor Matawalle whom he noted had since emerged as the party leader by provisions of the APC Constitution.

Buhari has been fair to govs, APC group replies Southern govs, says OBJ, Jonathan victimized governors.
A group within the APC, Legacy Awareness Group, has adjudged the present administration as the best the nation has experienced in terms of warm relationship between all tiers of government, since the return of democracy in 1999.

The Legacy Awareness Group, in a statement entitled, ‘A Break with Toxic Past’, signed by a former national publicity secretary of the party, Lanre Issa-Onilu and director general of the APC governors’ forum, Mr Salihu Mohammmed Lukman, recalled the gale of impeachments of governors and withholding of Lagos State funds under the Olusegun Obasanjo administration and the polarisation of the Nigeria Governors’ Forum under the Goodluck Jonathan administration.

The group, however, noted that governors across party divide have been having a warm relationship with the Muhammadu Buhari administration.

The group listed the bailout funds for states, the Paris Fund Club refund and social infrastructures which it further noted were equally distributed across states as fundamental departures from the hostility that existed between federal and state governments in previous administration.