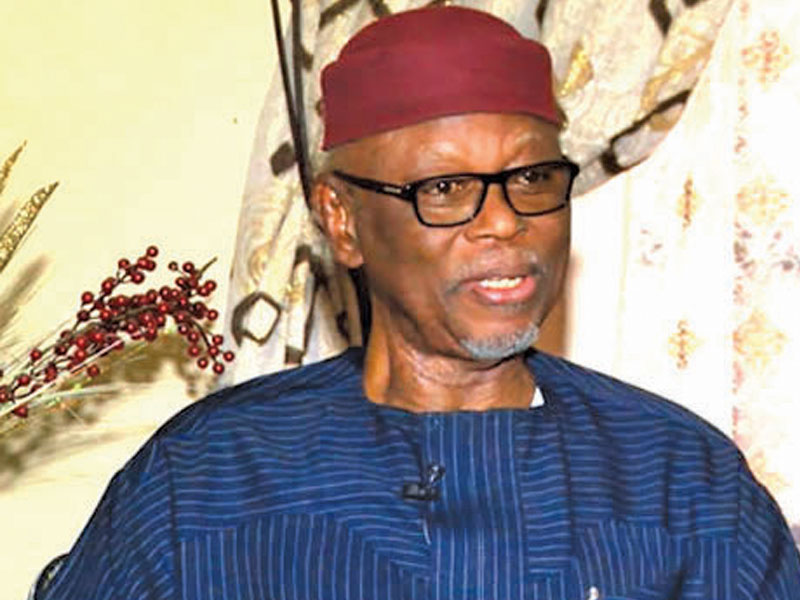 Former National Chairman of the All Progressives Congress (APC), Chief John Odigie-Oyegun, has stressed the need for the National Executive Committee (NEC) of the party to meet and constitute a Caretaker Committee.
He said this should be done even if the doctrine of necessity would have to be invoked for the constitution of a caretaker committee which main responsibility would be to organise a special national convention.

He added that the ruling party was fast becoming the single most dangerous threat to the legacy of President Muhammadu Buhari.

Oyegun’s call for a special national convention is coming as leadership crisis facing the party deepened, following the suspension of the national chairman, Mr. Adams Oshiomhole, by the court.

Though, the National Working Committee (NWC) of the party had earlier named the former governor of Oyo State, Abiola Ajimobi, as its acting national chairman. Because of Ajimobi’s health issues, it subsequently asked the National Vice Chairman (South-south), Hilliard Eta, to fill the position in Ajimobi’s absence.

However, the Deputy National Secretary, Chief Victor Giadom, is also laying claim to the chairmanship of the party, citing an order of FCT High Court of the 16th of March this year that mandated him to act as chairman when Oshiomole was first suspended.

But a Rivers State High Court sitting in Port Harcourt, on Friday restrained Giadom from parading himself as the Acting national chairman and a member of the NWC of APC.

Oyegun in a statement issued Saturday titled “Before it is too late”, said that in the last few months, everybody had watched how the party had brazenly subverted its own principles of internal democracy and flagrant violation of every rule of decent political engagement in a manner that made everyone associated with its promise of change liable to be accused of either hypocrisy or apostasy.

He said the party must therefore remember that its victory in the 2015 Presidential elections and the peaceful transfer of power that followed was a major testament of progress in the nation’s journey towards real democracy.

Oyegun noted that this unprecedented democratic achievement had since inspired progressive forces all over Africa and had become a standard by which democracy is measured in the rest of the continent.

According to him, “unfortunately, it appears that while other countries around us have marched ahead in the democratic journey, we have largely regressed. Because we were the political party that benefitted from a system that offered the opposition a chance, everyone expected us to show unwavering dedication to broaden the democratic space for everyone; to ensure that equity and justice take precedence over all other considerations and to ensure that our party truly functions as the vehicle for aggregating and managing contending political interests.”

Oyegun added: “Unfortunately, what we have witnessed from our party is the steady erosion of even the very basic tenets of democratic principles in a manner that could turn our watershed victory of 2015 to the waterloo of our hard won democracy.

“As former National Chairman of the party, I remain proud of the great strides of our government, under the leadership of President Muhammadu Buhari. However, I am afraid to note that the legacy of a government is defined mostly by its politics rather than its achievements in other areas, no matter how lofty those achievements are. Our recent history bears enough testimony to this reality.

“The military government of President Ibrahim Babangida is today remembered mainly for the June 12, 1993 elections and its aftermath. Our own political party, the APC, is fast becoming the single most dangerous threat to the legacy of our government and our President.”

The former national chairman said that as a major stakeholder and as a founding member of APC, he has made various efforts to add his voice to those of several other well-meaning leaders of the party, in ensuring that the ideals and principles that the founders of the party fought for were not completely thrown overboard.

However, Oyegun stressed that he had realised that those who feel more entitled to the party were no longer capable of hearing alternative viewpoints other than those counseled by their ego and their self-serving interests, which they had promoted over all other considerations, including that of common decency.

He stated categorically that no political party would survive for long, which is unwilling to accommodate competing ideas and provide the space for healthy debates.

Oyegun said that this statement was therefore a clarion call to leaders of the party, particularly the governors and President Buhari to urgently bring a stop to the disgraceful and humiliating charade occurring within the national secretariat of the party.

He stated: “There is a most urgent need for the party NEC to meet and institute for the party a Caretaker Committee (even if we have to invoke the doctrine of necessity), whose main responsibility will be to arrange for a special National Convention. The All Progressives Congress was built on the blood and sweat of Nigerians, young and old, too numerous to count, who were willing to give everything in the service of progressive politics. We must not allow their great sacrifices to go in vain.

“Today, almost every member of the party feels a deep sense of alienation and dissatisfaction with the state of the party. It hurts deeply to see how hollow it now rings to mention our party and “change” together. The time to act is now, before it is too late.”