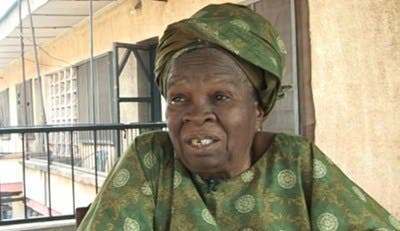 The mother of Sam Okwaraji has died in Enugu. She was 83.

Madam Janet Okwaraji’s death was yesterday confirmed by her eldest son, Patrick, who said she died ‘a few weeks ago’.

According to him, the family would meet soon to decide on her funeral.

Her son, Sam, died while playing with the national football team – the Green Eagles – at the National Stadium in a World Cup 1990 qualifier against Angola on April 12, 1998. He slumped and was pronounced dead later at the University of Lagos Teaching Hospital, Idi-Araba, Lagos.

Madam Okwaraji, a teacher, criticised the government for not honouring her son for the sacrifice he made for the country.

In a statement by his Special Adviser on Media and publicity, Femi Adesina, President Buhari described the late matriarch as an example of patriotism, loyalty and simplicity.

“President Muhammadu Buhari condoles with family of Lady Janet Okwaraji, a teacher and school proprietress, who passed on at 83, leaving lasting memory of kindness, love and charity as a devout Christian.

“The President believes Lady Okwaraji, whose son, Samuel, died in August 1989 while playing for the Super Eagles in a World Cup qualifier, will always be remembered for the sacrifices of the family for the nation.

“President Buhari affirms that the matriarch of the Okwaraji family, like her son, defined simplicity, loyalty and patriotism in many ways as she remained steadfast, believing in Nigeria, despite the vicissitude of life.

“As a mother, who lost her son in an unexpected situation, the President believes Lady Janet deserved to be acknowledged for her resilience and nobility, despite the odds.

“President Buhari prays that the almighty God will grant her soul eternal rest, and comfort her loved ones” the statement said.