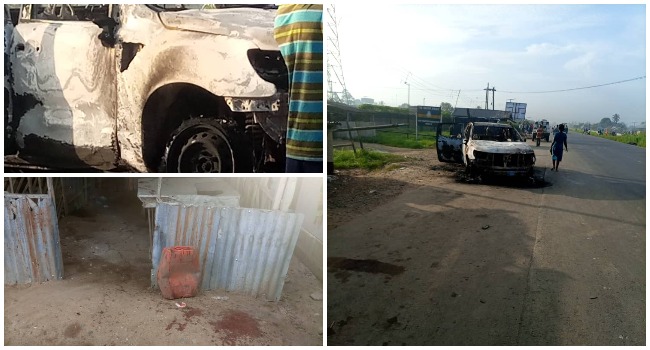 In a statement signed by his media aide, Kelvin Ebiri, Governor Wike said the attacks were carried out by unidentified gunmen who “are bent on plunging Nigeria into another unwarranted crisis.”

“He, on behalf of the Government and people of Rivers State, expressed his deepest condolences to the families of the Policemen and the Rivers State Police Command,” the statement said.

While assuring residents to be calm, Governor Wike said “the Security Council has taken measures to secure the State.”

According to a statement by the Police Public Relations Officer, SP Nnamdi Omoni, the attack which took place at 8:30pm, on Friday was carried out by “unknown gunmen who drove in two branded Hilic vans.”

He added that the hoodlums then launched a second attack on a police station in Rumuji, a town along the Bayelsa axis of the East west road in Emohua Local Government Area, killing two more policemen and set a police patrol van ablaze.

He said the third attack was launched on another police station in a community called Elimgbu in Obio/Akpor Local Government Area, where three additional police officers were killed.

The Rivers State Police Spokesman, however, said during the attack at Rumuji, the officers at the police station were able to put up a “strong resistance” and in the process, “fatally wounded two of the attackers who died on the spot.”

Omoni added that, in Elimgbu where three policemen were killed in the third attack, the officers there also engaged the attackers in a gunfight which forced the hoodlums to “abandon their bullet ridden Hilux van, while they escaped with various degrees of gunshot wounds with a snatched sienna bus.”

He noted that no police station was burnt during the attacks, but five assault rifles were lost to the gunmen.

The police Spokeman said security has been strengthened in all its formations, while appealing to Rivers State residents to be security conscious.

Omoni said the Commissioner of Police, Friday Eboka, has ordered a thorough investigation into the attacks after visiting the scenes of the incidents on Saturday morning.

Those attacks in April prompted the Rivers State Security Council, headed by Governor Nysom Wike to impose a nighttime curfew at the entry and exit points of the state from 8pm to 6am and also announced the restriction of movement within the state between 10pm and 6am daily.