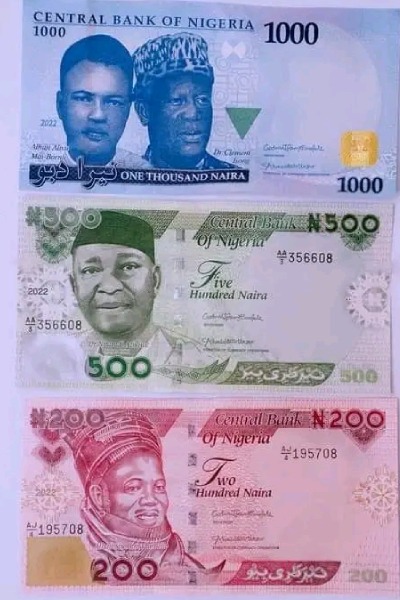 The newly redesigned naira notes will go into circulation today, Thursday, with Deposit Money Banks releasing the bills to their customers via over-the-counter payments.

The President unveiled the redesigned notes across the N200, N500 and N1,000 denominations.

The Governor of the Central Bank of Nigeria, Godwin Emefiele, had in October announced that apex bank would release re-designed naira notes by December 15, 2022.

He also disclosed that the old notes would cease to be regarded as legal tender by January 31, 2023.

Emefiele pointed out that the redesigning of the naira notes would help to curb counterfeit notes, and reduce ransom payments to terrorists and kidnappers.

The CBN boss said it was worrisome that Nigerians were hoarding 85 percent of the total currency in circulation.

In a memo introducing the policy, the CBN said third-party cheques above N50,000 would no longer be eligible for OTC payment while extant limits of N10m on clearing cheques remained.

The circular also directed banks to load only N200 and lower denominations into their ATMs and restricted withdrawals from ATM to N20, 000 per day. Withdrawals from PoS terminals were also limited to N20,000 daily.

The policy, which will become effective on January 9, 2023, has generated criticisms but the CBN clarified last Wednesday that PoS operators could apply for a waiver.