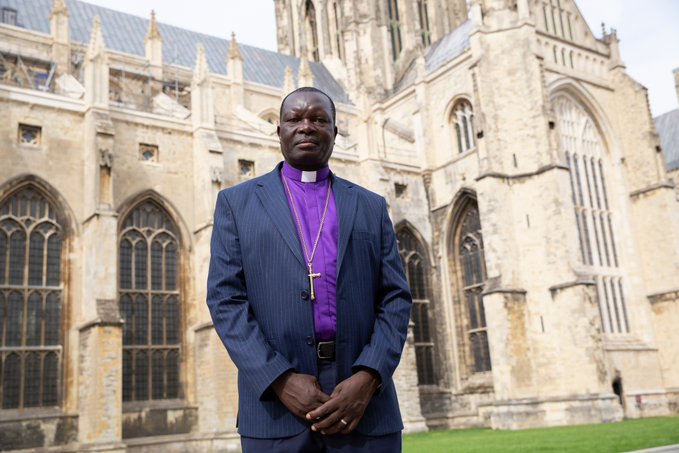 ORTHODOX bishops attending this year’s Lambeth Conference have published a Communique with their assessment of the health and future of the Anglican Communion.

Primates leading the Global South Fellowship of Anglican Churches (GSFA), representing some 75% of Anglicans across the globe, told a press conference that they will positively respond to the Archbishop of Canterbury’s invitation for primates to bring forward proposals for the future basis and discipline of the Anglican Communion, but started with their passion for world mission.

Archbishop Justin Badi, Chairman of the GSFA said: “The world is suffering in so many ways, right across the globe. Many of the human needs focused on in this Conference, ranging from climate change to human dignity, to sustainable development, are felt most acutely in Global South provinces. We will take action and reflect further on the ‘Calls’ we have received so that we can apply them to our own national and regional contexts.”

But the primate was explicit regarding the GSFA position on sexuality. He said: “We wish to be clear about our commitment to Resolution 1:10 in its entirety; and that includes the commitment to listen to the experience of homosexual persons, to minister pastorally and sensitively to all, and to condemn all irrational fear, homophobic behavior, and violence.  We also give thanks to the Lord for the life, witness, and ministry of faithful same-sex attracted Christians in our churches who practice abstinence, and we hope to pastorally support them more in our local churches.”

He said the unchecked spread of Revisionism had necessitated formations of new groupings of orthodox provinces and primates, such as GAFCON and the GSFA, the latter developing a structure in 2019 for enhanced “ecclesial responsibility across orthodox provinces”. GSFA is no longer geographically restricted, but a worldwide Anglican Fellowship, rooted in Global South provinces, but based on the commitment to doctrine and a “Covenantal Structure”.

Archbishop Badi stressed that at the heart of the conference was a fundamental dispute about Anglican Identity, which, he said, “is neither sociological nor historical”.  He explained: “It is first and foremost doctrinal. If Anglican identity and unity are rooted in common doctrine, we cannot be a Communion with a plurality of beliefs. There need to be limited theological diversity.  Limits that are set by a plain and canonical reading of scripture and supported by church history. We cannot accept a plurality of views on essential truths. Same-sex unions are not a secondary issue that allows for a position of adiaphora (indifference).”

He said that GSFA’s successful organization of an opportunity for bishops to re-affirm the 1998 biblical base for Lambeth Resolution 1.10 again in 2022, was important as a first step to signal the need for the Communion to reset its current policies and trajectory.  The primate of South Sudan, home to 4 million Anglicans added: “We (the Global South) represent the global face of Anglicanism, We sound the clarion call to return to biblical faithfulness at the historical home of our Communion. And we have come to register our collective ownership and stewardship of a Communion that in God’s grace, has outgrown the Western world.”

GSFA leaders say that in calling for repentance and re-setting, they do not exempt themselves. The Communique states: “In every Province and diocese, there is unfaithfulness to the Lord’s way. So, we will return to our Provinces and dioceses with humility to repent of all our sins, walk in newness of life and pursue holiness.”

GSFA leaders believe the Communion is “drifting more and more into becoming an association of Churches – confirmed by the way the Lambeth Conference is no longer expected to yield the mind of the bishops on matters of Faith & Order.” It adds: “The hard reality is that we cannot be a true Communion if some Provinces insist on their own autonomy and disregard the necessity of being an interdependent body. What affects all should be decided by all.”

The result, GSFA says, will be orthodox provinces and bishops now having “degrees of communion” with other provinces, recognizing the extent to which those degrees may increase and intensify, or decrease and face temporary, or permanent impairment. “Simply stated,” GSFA bishops say, “we find that if there is no authentic repentance by the revisionist provinces, then we will sadly accept a state of ‘impaired communion with them.”

Orthodox bishops believe at the end of the conference, the Communion is “not in a healthy, working state”, and that “the road to recovery and spiritual vibrancy will be long, and must start with a critical decision on whether Scripture is an indispensable basis of our common life as one Communion of Churches. The Communion cannot go on limping between two different opinions.”

Archbishop Badi says GSFA provinces “will connect with the Communion Instruments as best we can without compromising our convictions”, but stressed “the current situation warrants us to adopt suitable forms of “visible differentiation, but we will seek not to be schismatic.”

In stark contrast to the Conference narrative of ‘good disagreement’, the GSFA says orthodox bishops are “duty-bound to God not to ‘live and let live under the guise of simply walking together in continuing dialogue with those who have departed from the way (or path) of truth.”  This they say is why they raised a separate Resolution to re-affirm Lambeth 1.10 in 2022, giving all bishops at Lambeth “the opportunity to clearly support the primacy, authority, and clarity of holy Scripture, upon which 1.10 is based.” The result of the Lambeth 1.10 reaffirmation is expected to be announced by the end of the Conference, on Monday evening.

The GSFA was keen to focus attention on its future ‘within’ the Anglican Communion, and its part in evangelizing the world. Archbishop Tito Zavala of Chile, joining Archbishop Badi at the press conference, said: “As orthodox bishops at this Conference, we want to make it clear that we have no intention of leaving the Anglican Communion. We seek in the grace of God to be a ‘holy remnant’ within the Communion.

“We will not only safeguard the deposit of truth; we will seek to propagate it with renewed vigor. There is a whole world out there that is in need of the glorious, good news of Jesus Christ.  The signs of the times indicate that the return of our Lord is hastening. There is an urgency to proclaim the Lordship of Christ. We believe in a holistic Gospel that addresses all of humanity’s needs, and that demonstrates God’s special care for the poor, the marginalized, the diseased, and the needy. So, we will step up the work of mission and ministry in our respective fields and develop areas of Gospel partnership.”

Concluding his remarks, Archbishop Tito said GSFA was calling for “the re-setting process to commence without delay at the primate’s level for specific proposals to be discussed for the repair of the tear in the Anglican Communion.”  He added: “We hope these proposals set forth the orthodox reading of Scripture as the basis for ‘faith, order, and practice’ and that there will be regulatory ways and disciplines that ensure and encourage provinces and dioceses to abide by the common mind of the primates or the Bishops in Council.”

Linked to that, Archbishop Badi concluded by acknowledging “a possible new door may have opened” for orthodox influence on creating new policies within the Communion. He was referring to Archbishop Justin Welby’s Statement to bishops at the start of the ‘Human Dignity’ Plenary on Tuesday (AUG2).  Archbishop Welby had said:” I am very conscious that the Archbishop of Canterbury is to be a focus of unity and is an Instrument of Communion. That is a priority. I neither have, nor do I seek, the authority to discipline or exclude a church of the Anglican Communion. I will not do so.  I may comment in public on occasions, but that is all.”

Archbishop Badi said the GSFA primates will prayerfully consider this new position statement, adding: “We are very grateful to him for stating clearly his position. We shall study the ramifications of what he has said, and bring forward proposals for the way the Anglican Communion is governed and represented as the process of re-setting the Communion is launched.”

In the meantime, the GSFA leader said that the GSFA churches “would do everything possible to ensure there is no letup in our mission and ministry to a lost, darkened, and broken world. We have a gospel to proclaim to the multitudes, a flock to feed and disciple for Christ, and a world to bear witness to those people everywhere may respond to the light of Christ.”