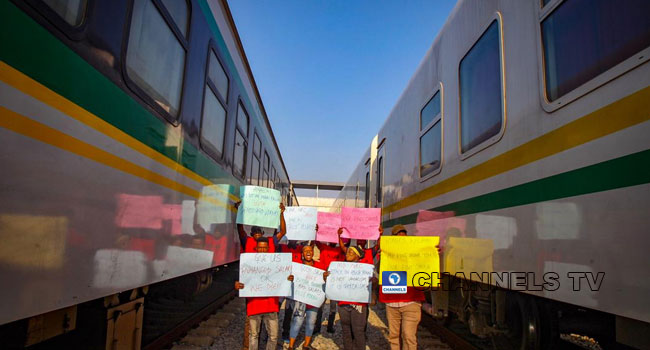 Railway workers have suspended their three-day warning strike which was earlier declared to demand improved welfare.

The workers announced the suspension on Friday, a day after they had commenced the strike and shut down passenger and cargo train services of the Nigerian Railway Corporation (NRC).

In Abuja the nation’s capital, prior to calling off the strike, workers in Idu had locked the station and displayed various placards in protest.

Aggrieved workers were also seen at the Mobolaji Johnson Train Station in Ebute-Metta in Lagos, with placards, lamenting poor welfare and poor salary.

Train service at the Professor Wole Soyinka railway station in Abeokuta, Ogun State capital was equally paralysed because of the industrial action.

The railway terminus was deserted as workers abandoned their duty posts.

No passenger was also seen around the passengers’ lounge areas as they were under lock and key.

The NRC employees under the aegis of the Nigerian Union of Railway Workers had on Wednesday vowed to halt train operations nationwide including services on the popular Lagos-Ibadan, Abuja-Kaduna, and Warri-Itakpe routes.

But after separate meetings with the Nigeria Railway Corporation Board in Abuja and other stakeholders in Lagos on Friday, they called off the industrial action.

Details of the agreement reached are, however, yet to be known.