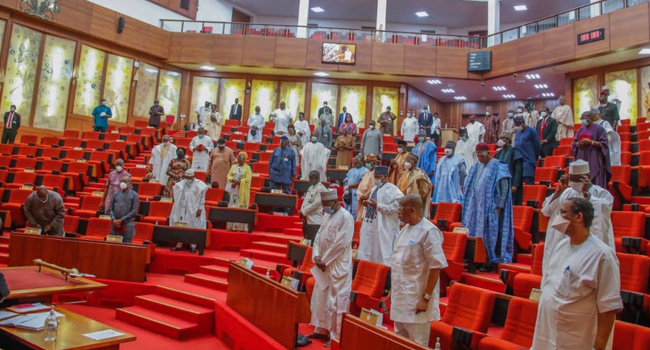 The Senate said Tuesday protests across the country by Nigerians, especially the Youth against the activities and actions the Special Anti-Robbery Squad(SARS) of the Nigeria Police Force have yielded results as that led to President Muhammadu Buhari dissolving the body.

Speaking yesterday in Abuja during plenary, President of the Senate, Senator Ahmad Lawan Tuesday who noted that the conduct of the disbanded SARS was uncalled for and totally unacceptable, said that it became very imperative for the body to go against the backdrop that no country would tolerate their overbearing nature and very oppressive in nature.

According to Lawan, members of SARS forgot that they were being funded by government funds and that when the people were pushed to the wall, they had no option than to rise up against the body. Lawan was contributing to a motion titled ” End SARS protest: the Death of Jimoh Isiaka and the attack on the Palace of Soun of Ogbomosoland: Need to put our security operatives on their toes and sponsored by Senator Abdulfatai Buhari, All Progressives Congress, APC, Oyo North.

Lawan who noted that  erring officers would be brought to book, however  urged  protesters to sheath their swords so that peace would reign, adding, ” the protests have yielded the desired results and those culprits involved in the killings should be brought to book.” Meanwhile, the Senate yesterday observed one minute silence in honor of late Jimoh Isiaka and other Nigerian youths who lost their lives due to the unprofessionalism of some members of the Nigeria Police Force.

Earlier in the presentation of the motion, Senator Buhari who came under Order 43 of the Senate Standing Orders as Amended said that ” The Senate: Notes with grief the death of J imoh Isiaka and several other promising Nigerian youths whose lives were cut short at their prime during the recent ENDSARS PROTEST which started on 8th October, 2020. Further Notes that the right to peaceful assembly and free expression are fundamental principles of any democracy, and section 40 of Nigerian Constitution (1999) guarantees the right of every Nigerian to peaceful protest. Informed that under Intonational Law, one of the duties of state and its law enforcement agencies is to facilitate the enjoyment of right to peaceful protest, and the 1990 United Nations basic principles on the use of Force and Firearms by Law enforcement officers provides that, in the disposal of assemblies that are unlawful but non-violent, law enforcement officers shall avoid the use of force or, where that is not practicable, shall restrict such force to the minimum necessary.

“Observes with regret that the protest on EndSARS snowballed into confrontation between the security operatives and the protesting youths in some part of the country and even turned violent in Ogbomoso, Oyo State for instance, as Nigerian police were alleged to have injured seven protesters and shot dead a young man known as J imoh Isiaka, a constituent of mine, during the protest.

“Also Observes with sadness that as a reaction to the death of J imoh Isiaka, the palace of the  paramount ruler of the city The Soun of Ogbomosoland was attacked by the protesters, several properties and vehicles were wantonly destroyed and many palace officials sustained injury. “Notes that the Inspector General of Police has forthwith disbanded the Special Anti-Robbery Squad (SARS) in response to the calls by many Nigerians.

“Convinced that non-violent protests have been a feature of democracy, with demonstrators calling for a declaration or a cancellation or even expressing their displeasure at a particular decision of government, so while preserving freedom of speech and legitimate protest is of course imperative, attention must be paid to how security operatives handle peaceful; protest with professionalism.

Also yesterday,  Senate Services Committee, Senator Mohammed Sani Musa, All Progressives Congress, APC, Niger East has hailed the Youth  for leading the Movement against SARS, even as he commended President Muhammadu Buhari for instructing the Inspector- General of Police, IGP, Mohammed Adamu for disbanding the body. In a statement yesterday, Senator Musa said, “Throughout 2020 our focus has been on addressing and cushioning the effects of COVID19 – a disease caused by a virus that we cannot see. However, more recently, Nigerians have gathered in their thousands, across all regions as a united force, to combat a virus that they see and fear daily.

“The Special Anti-Robbery Squad (SARS) has been the topic of many discussions, particularly with regards to human rights violations and police brutality. We were recently on-lookers as Americans gathered en masse to demand police reform, many of use shared the hashtags and the frustrations, but these same issues are occurring here at home and Nigerians have decided that enough is enough.

“The evidence against SARS is not short of damning, from reports from Amnesty International to videos and witness statements that indicate not just a flagrant abuse of power, but a societal menace that affects everyone. “Despite multiple previous attempts to reform SARS, there is overwhelming evidence to suggest that the unit remains a danger to the people it was created to protect.

I commend the prompt action of President Muhammadu Buhari for the condemnation of the abuse of power and police brutality recently perpetrated by SARS operatives. And the directive to the Inspector General of Police to immediately dissolve the SARS, which already the IGP has issued orders in that direction.

“The first step to change is acknowledgment, Nigerians as a whole have embarked on this cause, and I anticipate an end that will reflect the government’s commitment to protect and secure its citizens. “I join many Nigerians in the sentiment that if change and reform are not effective in SARS – the only viable option is the dissolution. “I applaud our youth for leading the movement and exercising their democratic right to peaceful protest. I urge you to continue on the path of action taking as this is how nations are built. I commend you for your resilience.

I stand as an ally in this movement as a Nigerian first, but also in my capacity as a lawmaker. “Moving forward, I stand willing to support this cause. Be through providing support for victims and their families or in the Senate where I trust my peers and I will continue to be advocates of continuous reform and development in all aspects, including the Nigerian police force. “Finally, I join all Nigerians in sending my heartfelt condolences to the families and loved ones that have been affected by the menace perpetrated by SARS operatives. History will remember those that answered the call.  May Allah continue to guide and protect us, and our beloved nation.”