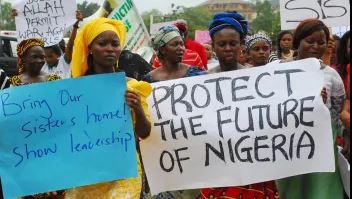 Students of the Ladoke Akintola University of Technology, and some youths of the town staged a protest in Ogbomoso over the killing of a final year student of the school, Rachael Opadele, by kidnappers.

It was gathered that the owner of the hotel where the lady was working, Olugbenga Owolabi, was also killed by the gunmen.

Owing to the ongoing strike by university lecturers, the late student had taken up a job at the hotel before her tragic murder.

Unconfirmed reports have it that a N5m ransom was agreed by an Okada rider and a family member to be taken to the bush to ensure her freedom.

The motorcyclist was also said to have been shot dead but the passenger escaped and was said to have broken the news to the family of the victims in the early hours of Wednesday.

The police authorities in the state are yet to comment on the incident but LAUTECH Student Union Government issued a statement, indicating that the final year student had been killed by the gunmen.

A statement jointly signed by the SUG President, Anuoluwa Adeboye; General Secretary, Ibrahim Opaleke, and Public Relations Officer, Love Michael, said the students were saddened by the news of her demise.

“This is a dark moment in our school as we were lashed with the death of one of us. We were consumed when we first heard about her kidnap and we led the team to write to governments, security operatives, and all concerned stakeholders to see to her release without her dying. It’s so disheartening and terrible to have heard her dead in the early hours of today,” the statement read.

“Our heart is bleeding. Despite the notice to the government, security operatives, and all other stakeholders, there was no known form of genuine commitment demonstrated by all of them in addressing this ugly trend in our community and the state.

“We cried out but unfortunately, it ended just on the walls of social media platforms because we are mere students whose lives mean nothing to the government.”

We call on the government to administer justice to Rachael. The Government should act fast and let justice be served. As a matter of urgency, we are challenging the Government to present to the public the killer(s) of our dear colleague. Enough of killing innocent Nigerians. We won’t continue to fold our arms while the Government continues to be lackadaisical about the security matters in our community.

Our warmest condolences are with the family, friends, and well-wishers of Rachael Opadele. All Ladoke Akintola University of Technology Students mourn with you for we are in this together. May the Good Lord comfort us all. May justice be granted for our loss!