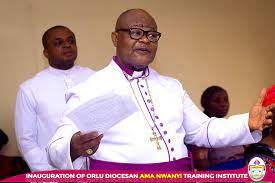 The Bishop of Orlu Anglican Diocese, The Rt. Rev’d B.C Okeke has called on the government of Imo state and the Federal Government of Nigeria to fish out and prosecute those who desecrated t Peter’s Anglican Church Eziama Obaire.

Bishop Okeke noted that “The act of desecrating the House of God is a direct affront and challenge to God Almighty.

In a press statement made available to ACNN TV, the Bishop of Orlu Diocese, stated as follows;

Report available to me has it that on Sunday the 26th of December,2021 a team of heavily armed men invaded the premises of St Peter’s Anglican Church Eziama Obaire in the Diocese of Orlu in the middle of the divine and solemn Church Service.

Report has it that the shooting team took away the parishioner of the Church Chief Uche Nwosu who was in the Church for the outing Service for his Late Mother, who was just buried by the Church on the 22nd of December, 2021.

Without prejudice to the reason for the arrest of our said parishioner, the whole episode constitutes a very serious assault on the Anglican Church and the entire Church of God.

We totally condemn this despicable conduct and call on the Government of Imo State and the Federal Government of Nigeria to investigate the matter and ensure that the perpetrators of this act are properly disciplined.