President Buhari Returns To Abuja After 1 Day Visit To Lagos 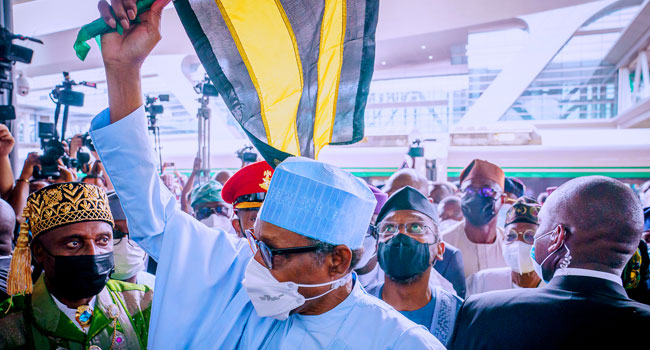 President Muhammadu Buhari has returned to Abuja after a one-day working visit to the country’s commercial hub, Lagos.

“President Muhammadu Buhari has returned to Abuja after a one-day working visit to Lagos State,” his personal assistant on new media, Bashir Ahmad wrote on his Facebook page.

The 78-year-old Nigerian leader visited Lagos to commission some projects including the 157-kilometre Lagos-Ibadan standard rail project at the Mobolaji Johnson railway station in Ebutte Metta.

During the event held at the Mobolaji Johnson Railway Station, Buhari reiterated that his administration will continue to prioritise the railway system.

He described the project as another milestone in the drive of his administration to revitalise the railway system and establish it as a choice mode of transportation for both passengers and freight.

“The President pledged that his administration would continue to prioritise the railway system as a transportation backbone that can transform industrial and economic activity in the country,” read a statement by Buhari’s Special Adviser on Media and Publicity, Femi Adesina.

‘‘This vital line establishes an end-to-end logistic supply chain in railway transport within its short corridor, Lagos – Ibadan, as goods to the hinterland would now be transported by rail directly from the Apapa port Quayside straight to the Inland Container Depot located in Ibadan from where it can be distributed to other parts of the country.”

It is also the first Nigerian railway line to be started and finished by the same government, since 1960.

The Minister of Transportation, Rotimi Amaechi, had earlier explained that the projects primarily aim at ensuring the seamless movement of cargoes from the Apapa Seaport via train to further decongest the ports.