PDP Govs Forum And APC Berates Each Other Over Killings 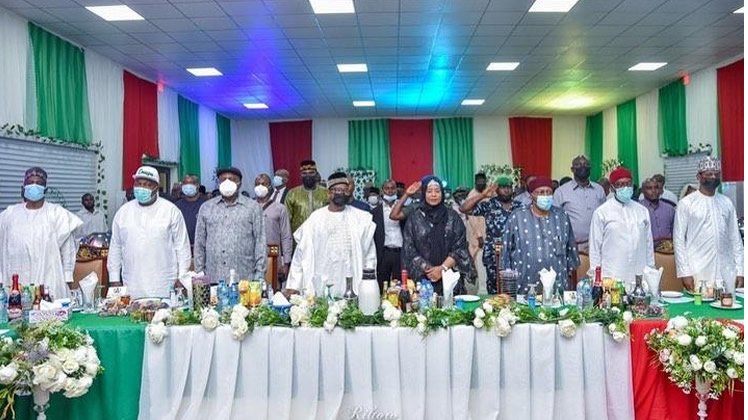 The Peoples Democratic Party Governors’ Forum and the All Progressives Congress on Monday berated each other over killings and other forms of insecurity in the country.

The PDP Governors’ Forum, in a communique issued at the end of its meeting in Bauchi, the Bauchi State capital on Monday, accused the APC-led Federal Government of turning Nigeria into a killing field.

The APC, in its reaction, said the PDP was a failed party, adding that the opposition party’s allegations were tissues of lies.

The  PDP governors’ communiqué was read by their Chairman and Sokoto State Governor, Aminu Tambuwal.

The governors alleged that the President, Muhammadu Buhari had turned Presidential Villa to the APC headquarters. They also accused the ruling party for turning the country into a killing field.

They also stated, “The meeting condemned the attempt to foist on all political parties, one method of conducting primaries, that is, by direct method only, through the Electoral Act Amendment Bill.

“The governors noted that the method is prone to massive rigging, as evidenced by a situation where President Buhari scored about 15 million votes in the 2018 APC direct primaries only to score 15 million votes from the entire country in the 2019 general election.

“The governors advised that political parties should be allowed to decide whether to use direct or indirect method of conducting primaries as part of internal democracy in political parties.”

“The meeting condemned, once again, the use of underhand tactics to arm twist some PDP governors and other stakeholders to join the APC, a political party that has wrecked Nigeria’s economy, turned Nigeria into a killing field and has nothing to offer Nigerians but misery and bad governance.

“The governors condemned Mr President and the APC for turning the Presidential Villa, that belongs to all Nigerians, into the new APC headquarters, where coerced PDP members are being paraded at intervals.”

The forum condemned the increased cases of kidnapping, banditry and terrorism in the country, describing them  as heinous crimes and not business ventures as claimed by the APC.

The governors said that it was time for the Federal Government to urgently bring insecurity in country to an end.

The governors stated, “On security of lives and properties, in addition to our earlier recommendations, it is time to bring the activities of bandits, kidnappers and terrorists to an end, through increased use of military equipment, traditional means of conflict resolution and technology for surveillance and the development of the political will to flush them out.

“Kidnapping, banditry and terrorism are not business ventures as claimed by the APC, but heinous state crimes, that are  destroying the Nigerian economy, the educational and social future of our children and causing significant social upheavals in society, the PDP governors admonished.”

The PDP governors called on the Federal Government to partner  state governments to create employment for the youth rather than paying lip service on the ease of doing business.

They said, “On the economy, the meeting admonished the APC Federal Government to collaborate more with state governments to stem unemployment scourge affecting the youth of Nigeria, through technology and increased production in all fields of endeavour.

“Government should stop paying lip service on the ease of doing business, as foreign direct investments have continued to fall partly due to obstacles placed on foreign companies wishing to invest in Nigeria.”

On the Electoral Act Amendment Bill, the governors said there was the need for a free, fair and credible elections in the country and called on the National Assembly to entrench electronic transmission of results of elections in the nation’s electoral system.

They stated, “The meeting requested the Independent National Electoral Commission, the only body empowered by the constitution to conduct elections, to deploy appropriate technologies necessary to ensure that the votes of every Nigerian is counted and made to count.

“The meeting further called on the Nigerian Communications Commission, telephone companies and all relevant stakeholders to ensure that universal access and service of information and communication technologies  are provided especially in rural, un-served and under-served areas of the country before the 2023 general elections.”

The governors reiterated the need for the Nigerian National Petroleum  Corporation and other revenue generating agencies of government to strictly abide by the constitution by remitting all their revenues less cost of production into the Federation Account as provided for by section 162 of the constitution.

They enjoined Nigerians  to take advantage of the ongoing registration of voters by INEC to register , “thereby arming themselves with the necessary tools in the struggle to rescue Nigeria from the APC maladministration.

On Sunday night at a dinner organised by the Bauchi State government for the PDP governors, Tambuwal said when the PDP  regained power in  2023, it would salvage the country.

He said that instead of tackling the Boko Haram menace upon which basis it seized power from the PDP in 2015, more “Boko Harams” had emerged in the last six years.

Tambuwal who was represented by the Taraba State Governor, Darius Ishaku, said that the PDP had the capacity to remove Nigeria from the quagmire the APC had thrown it into.

He said, “We have no hope except in the PDP. We will live in the PDP and salvage whatever it is left  in the country  when we regain power in 2023. If you look around, all the PDP states are where there is work ongoing and I am sure I am speaking the facts and the minds of many Nigerians.

In its response, the APC, in a statement titled, “PDP’s admittance to its failed state remarkable – APC,” signed by the party Secretary, Sen. John Akpanudoedehe, in Abuja, on Monday, dismissed claims contained in the PDP Governors Forum Communiqué as tissues of lies.

Akpanudoedehe said the communiqué by the PDP Governors’ Forum was “laced with lies, idle conspiracy theories on the state of the nation” and a pitiable attempt to explain its failed state as the supposed main opposition party in the country.

The statement read in part, “It is indeed remarkable that the PDP has finally opened up to its fast-depleting fortunes. However, it is advisable that the PDP concentrates on redemption instead of blaming the APC or anyone else for its rudderless state.

“We reiterate that it is foolhardy for the PDP to expect its members to sink with the party in the face of its failed state. The PDP should quickly address itself to the fact that its members and leaders who are joining the APC in droves are attracted and inspired by the progressive leadership of the President Muhammadu Buhari government and the internal democracy being entrenched by the leadership of the Governor Mai Mala Buni-led APC Caretaker/Extraordinary Convention Planning Committee.

“Under President Buhari, every election conducted in the country has been an improvement on the last. The APC will continue to support constitutionally backed innovations by our election management bodies to make our elections more credible.

“At party level, the APC is resolved to entrench internal democracy in all decision-making processes, particularly party nomination – direct and indirect primaries or consensus.”