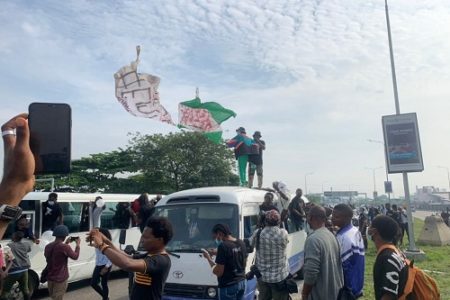 Celebrities and youths on Wednesday held a memorial car procession at the Lekki tollgate in Lagos State.

The parade announced by rapper Falz and comedian Mr Macaroni took place amid heavy security presence to commemorate the one year anniversary of the #EndSARS protests that led to the disbandment of the Special Anti-robbery Squad (SARS) of the Nigeria Police.

Scores of young Nigerians, alongside the celebrity duo, filled up several cars and buses, blaring horns as they drove through the toll plaza as early as 8am.

While the parade was in progress, officials of the Lagos Neighbourhood Safety Corps (LNSC) passed vehicles to ensure a free flow of traffic. 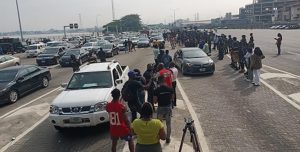 Meanwhile, there was an altercation between some members of the press and the security officials after the journalists were harassed by the police at the venue.

‘Police Have Not Learnt’

One of the arrested persons was picked up by armed security operatives while he was having a chat with reporters.

“I did not do anything,” said the young man before his arrest. “They beat me, they collected my phone, they took my money; the police have not learnt their lessons.”

The arrested persons were later taken into a waiting truck of the Lagos State Task Force, after which the vehicle zoomed off. 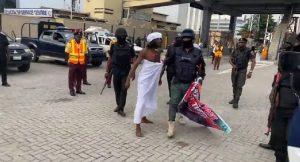 As the event continued, the number of youths at the venue grew while others came down from their cars, chanting solidarity songs.

Ahead of the anniversary, police authorities in Lagos had threatened to resist any form of protest and arrest anyone taking part in it.

This led to the decision of the youths to organise a memorial procession rather than a protest, although they maintained the call for an end to police brutality. 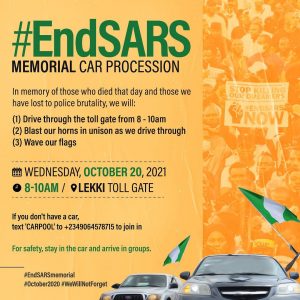 Falz and Mr Macaroni took to Instagram on Tuesday to share an e-flier to announce the parade in honour of the victims of police brutality in Lagos and other parts of the country.

“In memory of those who died that day and those we have lost to police brutality, we will: drive through the toll gate from 8-10 am; blast our horns in unison as we drive through and wave our flags,” the leaflet read. “Innocent Nigerian citizens waved flags and sang till they were shot at, injured and killed. We must never forget.”

Both celebrities had, however, appealed to persons interested in the procession to stay guided and stay in their vehicles throughout the parade, as well as in groups for safety reasons.

“We’re rolling up in cars tomorrow (Wednesday) to drive through the tollgate. We know their way, so a procession of cars is the safest option to minimize police harassment. We will stay in our vehicles throughout.”

The police later reviewed their position on protest, saying they would only allow indoor and virtual events.

The Commissioner of Police in Lagos, Hakeem Odumosu, also cautioned residents, especially the youth against embarking on any form of protest without the approval of the police.

“If you want to go on vehicular procession, okay. They are not going to stop somewhere, come down somewhere and converge somewhere,” he said. “(I) want the criminally minded people to know that the police are up to take care of them.”