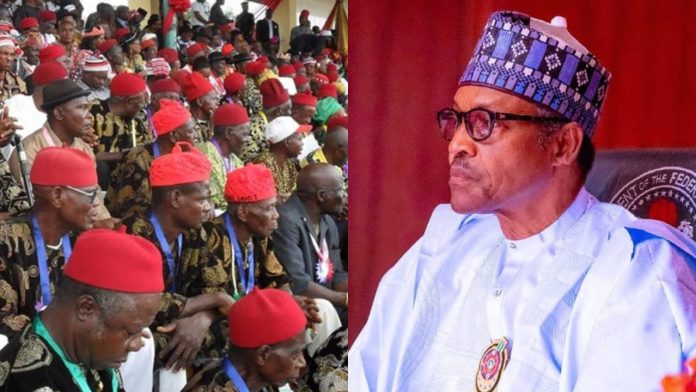 The apex Igbo socio-political organization, Ohanaeze Ndigbo, has called on Imo State citizens to ignore the sit-at-home order issued by the Indigenous People of Biafra, IPOB ahead of President Muhammadu Buhari’a visit on Thursday, September 9.

Newspot recalls that IPOB had in a statement ordered residents of the state to observe a sit-at-home during the president’s visit in solidarity for its leader Mazi Nnamdi Knau who is currently in the custody of the Department of State Services, DSS.

Reacting in a statement issued on Tuesday by Dimm Uche Okwukwu, Deputy President General, Ohanaeze Ndigbo Worldwide, the group encouraged all residents of Imo State “to come out en masse and welcome the President”.

According to the statement, Ohanaeze said “President Buhari is a friend and defender of Ndigbo.

The statement reads: “We urge all Imolites and residents of Imo State to completely ignore and disregard the purported order, or any illegal order, capable of portraying Imo people and the larger Igbo population as hostile to the exalted Office of the President of the Federal Republic. We encourage all to come out en masse and welcome the President.

“Contrary to the blind outbursts from certain quarters, he gave Igbo sons and daughters key posts in his government. Eng. Ibe Kachukwu was his Petroleum Minister. Dr Chris Ngige remains the Minister of Labour and Employment.

“Chief Chibuike Rotimi Amaechi is the first Nigerian to serve as Minister of Transportation while Dr Ogbonnaya Onu serves as Minister of Science and Technology, all in President Buhari’s government. In the Security structures of Nigeria, President Buhari made the Igbo-born General Lucky Eluonye Onyenuchea Irabor his Chief of Defence Staff. We could go on.

“Since 2015 President Buhari has retained an Igbo man called Godwin Emefiele as Governor of the Central Bank of Nigeria. Any man who hates you can never trust you with the key to Nigerian treasure house. Only a true friend of Ndigbo can do that.

“We Igbos never voted for President Buhari in 2015 and 2019 but he still carries us along, infrastructure wise. He is building the Second Niger Bridge to facilitate human and commercial movements. He is interested in building a pioneer Multi-Disciplinary University at Ubima and deep sea port in Bonny, all in Rivers State.

“The badly damaged Port Harcourt-Enugu Express Road is currently receiving positive attention from President Buhari. He has done us well. So we must come out to welcome him to Imo State.

“We must also accept the fact that there is nothing Imo people can do between now and January 2024 when they will go to the polls and reelect or replace the Imo State Governor Hope Uzodinma. But as lovers of progress, we must support him in hosting the president. We must do everything in our power to maintain the peace while our August visitor from Abuja is in Igboland.

“We must be good hosts and never contemplate any boycott capable of reminding other Nigerians that they once went to war against us. Indeed, we must turn the presidential visit into a bridge-building opportunity capable of convincing Nigerians to zone the 2023 presidency to Ndigbo”.