Edo State Governor, Godwin Obaseki, has ordered the probe of contracts for the construction of the Benin Specialist Hospital and supply of hospital equipment.

The Secretary to the State Government (SSG), Osarodion Ogie, disclosed this in a statement forwarded to Channels Television on Thursday.

According to him, the state government has constituted a Commission of Inquiry to conduct a detailed investigation into the process leading to the conceptualisation, design, construction and equipping of the hospital.

The commission, Ogie noted, was also asked to determine if there was a breach of the Edo State Procurement Law and other extant laws and procedures.

He revealed that the commission would be chaired by Justice J.U. Oyomire (rtd), with Mr Anthony Izevbekhale to serve as its secretary.

He said the terms of reference of the commission include, “To conduct a detailed inquiry into the processes leading to the conceptualisation, design, construction and equipping of the Benin Specialist/Central Hospital Extension (originally designated as the Accident and Emergency Unit) and determine if same were in breach of the Edo State Procurement Law and other extant Laws and procedures in that regard.”

Others, according to him, are, “To inquire into the process of tendering for, award, execution and payment for all contracts arising from and/or connected with the Benin Specialist/Central Hospital Extension and to determine if such payments were made in compliance with extant laws.

“To verify the details and dates of construction carried out on the project and equipment supplied on the hospital project and to determine if same were in line with the contract stipulations and timelines.”

Ogie added that the commission would identify any losses and/or damages incurred or suffered by the state government and to further identify all persons responsible for such losses or damages.

He noted that it would also make appropriate recommendations for such disciplinary civil or criminal sanctions to be meted out against any persons found to be responsible for such losses or damages suffered by the state government arising from failure to follow extant Laws and procedures.

See the document below: 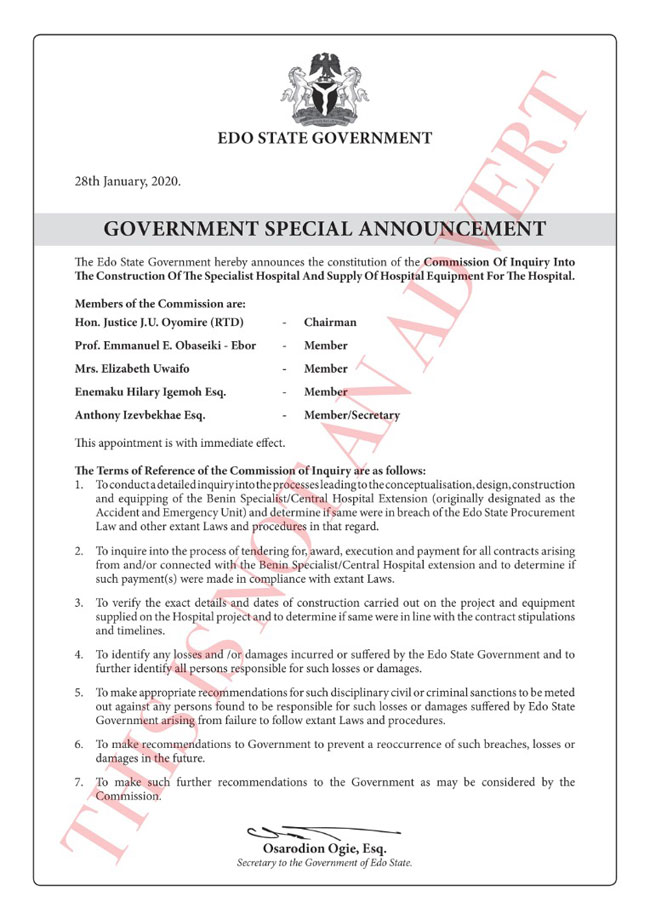