‘No State Is Poor’: Wike Faults Governors For Dependence On FAAC Allocation 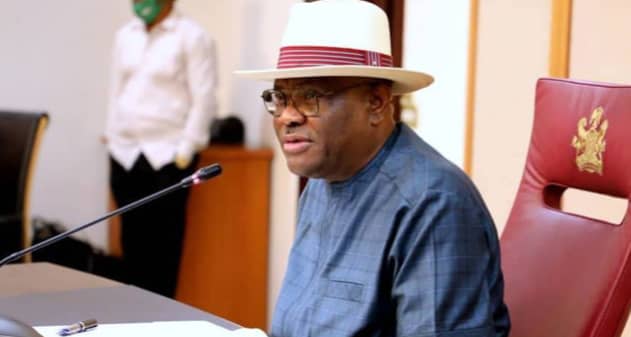 Rivers State Governor, Nyesom Wike has faulted governors who depend on the monthly Federation Accounts Allocation Committee (FAAC), saying no state in Nigeria is poor.

Speaking during a lecture of the Executive Management Course 14 in Abuja, Wike wondered why governors lament there is no money in their states yet seek a second term in office.

The governor noted that every state has its own advantage and disadvantage, comparing two American states – Houston and California.

The first, according to Wike, is blessed with oil but not as developed as the second which doesn’t have crude oil but is the biggest economy in the United States.

He believes that development can strive if the governor is able to use the advantage for the benefit of the state and its people.

“No state is poor in this country, it is this over-dependence on the Federal Government,” Wike said. “At the end of every month, they send their Accountant-General/Commissioner of Finance for FAAC.”

He, therefore, charged governors to make good use of the opportunities at their disposal and stop relying solely on the Federal Government for survival.

When he came into office in 2015, Governor Wike recalled that he inherited Rivers State as one that was financially depleted and very close to bankruptcy.

This, to him, is because workers in the state were owed their monthly salaries; pensioners were not paid as well as contractors, describing the situation as being problematic.

Wike of the Peoples Democratic Party (PDP), explained that what he met on the ground became worse for him because his predecessor, Rotimi Amaechi (of the All Progressives Congress) did not leave a handover note to ease governance.

According to him, institutions should be made strong so that whether a governor is leaving the office or not, governance would not fail as it is a continuum.

He added, “Nigeria is one funny country how a democratically elected governor in the history of Nigeria will take a padlock and lock the court for two years. For two years, the courts were shut down in Rivers State and you know the implication of the courts being shut down.

“Tell me what will be the fate of those who have problems with their contracts, how do they go for determination of who is wrong or right?” he questioned.