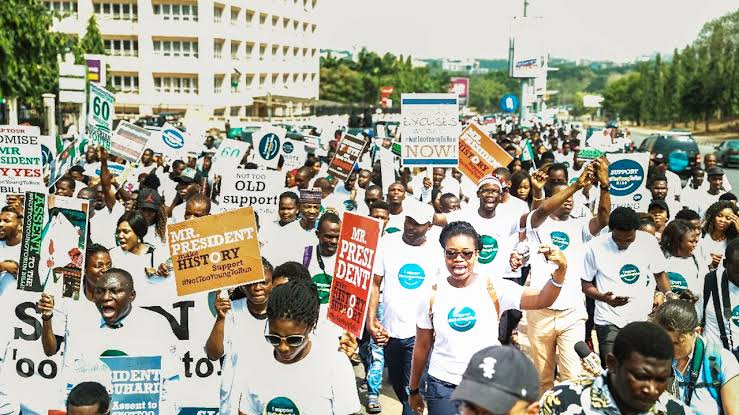 The road leading to the national secretariat of the Nigerian Governors Forum in Maitama, Abuja, was blocked by placard-carrying youths who issues two weeks ultimatum to the Nigerian governors and Local Government chairmen to revamp all the Primary Healthcare Centers (PHCs) or face their wrath.Led by their National President, Comrade Chinonso Obasi, the youths under the auspices of Nigerian Youth Union (NYU) bore several placards with several inscriptions decrying the dilapidation in the nation’d PHCs.

They danced about chanting solidarity songs, blocking off other road users, and demanding to be addressed by the most senior member of staff at the NGF secretariat.

Handing over a letter addressed to the NGF thro their chairman, Governor Kayode Fayemi of Ekiti State, NYU decried the neglect of the PHCs even in this time of Covid-19.

They alleged that several lives have been lost in the rural communities than at the urban areas due to the near absence of effective hewlthcare facility in those areas.

“Having observed that a vast number of LGAs do not have functional/standard hewlthcare facility, leaving the rural poor to be ravaged by diseases with attendant high maternal and infant mortality, he had on Januray 28th, 2021 issued a 14-day ultimatum for the full implementation of the letter of the communique dated 28th January, 2021.

“The ultimatum which elapsed on the 10th February without any response or positive feedback from relevant authorities compelled Nigerian Youth Union to mobilise other heads of different youth and asudent associations for a peaceful protest to the Federal Ministry of Health on 11th February, 2021 for a demand on immediate implementation of massive establishment of PHCs across Nigeria.

“We had exhaustive meeting with the minister, Dr. Osagie Ehanire, other top ministry officials and security personnel, and since there was no positive impact, we decided to take our grievances to you, the governors and ALGON members.

“We are pained that most governors show no regard, despite the LG Autonomy Bill which was recently passed into law, but they still picket a large chunk of LG funds.

“We hereby give them 14 days ultimatum to buikd snd equip the new and existing PHCs so that our rural folks will stop dying of Covid-19 and other debilitating ailments,” NYU national President, Obasi said.