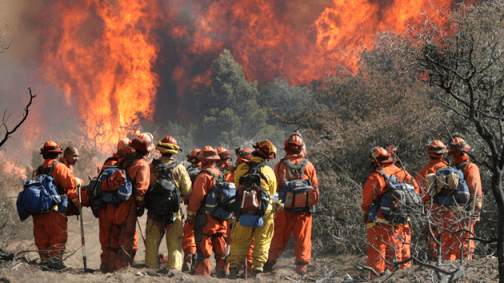 A group of 20 experienced Californian firefighters were due to travel to Australia on Monday to help combat the wildfires that have ravaged roughly 12.4 million acres of land and killed at least 24 people and millions of birds, reptiles and mammals.

The firefighters are all leaders in their units and collectively have more than 100 years of experience, each being five- to 20-year veterans.

Many in the group performed an array of tasks during California’s fire in Saddleridge in October – one was the captain of a hotshot crew, another oversaw a firefighting unit, some worked on aviation assignments.

They all will assist the Victoria Rural Fire Service, the largest fire service in the Australian state of Victoria.

Jonathan Merager, a fire-prevention technician and 18-year firefighting veteran, said he didn’t hesitate to volunteer for the assignment when a request for help was submitted to various state and federal agencies.

“Our Australian sisters and brothers have helped us over the years,” he said. “It seemed natural to reciprocate that assistance.”

Merager, 47, said that his only apprehension is that he will be leaving behind his wife and sons, ages 9, 11, 15 and 25. He said the family has expressed concerns after seeing images of the fires’ path of destruction throughout Australia.

But they’re used to his travels throughout California and across the country to combat fires.

In 2009, he battled the Station fire that blackened more than 160,000 acres of the Angeles National Forest.

In October, while firefighters in Southern California battled Saddleridge, Merager was dispatched to North Carolina, where fires burned thousands of acres of land.

The request to Angeles National Fire Service came from the National Interagency Fire Center – the government agency that is coordinating the deployment of firefighters from the U.S.

Roughly 100 firefighters have traveled to Australia over the last four weeks after a U.S. liaison visited to help determine the scope of U.S. resources.

Mitchell said that while the terrain in Australia is similar to that of Southern California, environmental hazards to plants and animals differ.

“There’s a lot more snakes that could bite you,” he said.

The group will receive a brief orientation before receiving their assignments in Victoria, where they will remain for 35 days.

Merager believes that his assignment will be on the ground at the cutting line, removing brush around the perimeter of the fire.

The exchange of fire resources is made through an agreement between the of U.S. Department of the Interior and Emergency Management Australia.

“It works really well because Australia has a different fire season than we do in the United States,” NIFC spokesperson Kari Cobb said.

In August 2018, Australia and New Zealand sent roughly 140 firefighters to the United States for nearly 30 days.

The group was stationed in Northern California, Washington and Oregon.

The firefighters earn their normal salary on the special assignment, Cobb said.