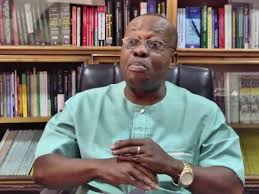 Monday Ubani has said that the Minister of Niger Delta Affairs, Senator Godswill Akpabio, submitted a comprehensive list of lawmakers involved in contracts in the Niger Delta Development Commission (NDDC) to the House of Representatives Committee.

Ubani, a former Vice President of the Nigeria Bar Association (NBA), stated this when he featured on Channels Television’s Sunday Politics.

According to him, Akpabio submitted the names to the House but the Speaker, Femi Gbajabiamila, chose to sideline it and read out another letter, ostensibly absolving the lawmakers from any wrongdoing.

The House of Reps had on Tuesday asked Akpabio to, within 48 hours, publish names of National Assembly members he claimed received NDDC contracts or be dragged to court.

On Thursday, Akpabio responded to the lawmakers’ challenge in a letter.

Reading the letter, Gbajabiamila said that Akpabio denied accusing members of the National Assembly of collecting 60 percent of contracts in the NDDC.

But Ubani, during the TV program said, “My findings is that this honourable Minister (Akpabio) sent a letter with the attachment of names of (members) of the present House, especially the two committee chairmen of the two chambers, the Senate and House Representatives that were involved in contracts in NDDC.

“And those were not brought to the attention of the House. What was read was the second paragraph that was to them very beneficial and they were all clapping and rejoicing whereas the letter was rather comprehensive and very clearly indicated names that were involved in the contract thing in NDDC.”

Ubani’s claim came just as the president of the National Youth Council of Nigeria, Solomon Adodo, on Sunday in Abuja, also made available to newsmen, a document Akpabio purportedly sent to the National Assembly listing names of federal lawmakers involved in NDDC contracts.