My Daughter Got A Salesgirl Job Two Months Ago, Says Mother Of Victim Over Yoruba Nation Rally 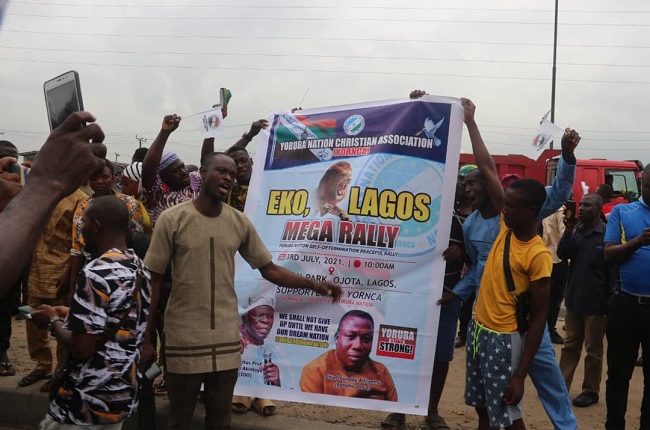 Mother of Jumoke, who lost her life during Saturday’s Yoruba nation rally in Lagos State, Mrs Ifeoluwa Adeeko, has said that the deceased was 25 years and not 14 as being speculated in the media, just as she said she got the sales job two months ago.

Mrs Adeeko, who claimed to be a street cleaner, said her daughter took the job of salesgirl to complement her efforts at taking care of the family.

While reliving her last moments with her daughter, Mrs Adeeko said that both of them left home at about the same time on the day of the incident. “We both left home at about 7:30 a.m. on Saturday and bade each other goodbye. I was still in Ikeja working when I received a call to return home.

“I work as a street sweeper; I also help people to clean their compounds, and when she saw the stress I was going through, she took up a job as a salesgirl; unfortunately, she was killed less than two months after she started the work.”

The mother lamented: “She was my first child, but I have divorced her father and remarried. I don’t want her to die in vain; she went to work as a salesgirl to assist me and her siblings.

“She was my helper and my gist partner; I am going to miss her. I want the person who killed my daughter to be arrested and prosecuted, because I know that I can’t get her back.”

The woman also debunked the statement from the police that the deceased was not killed by stray bullets from their activities on Saturday, just as she said she had not been allowed by the police to see her body, even after visiting the Area H police command in Ojudu.