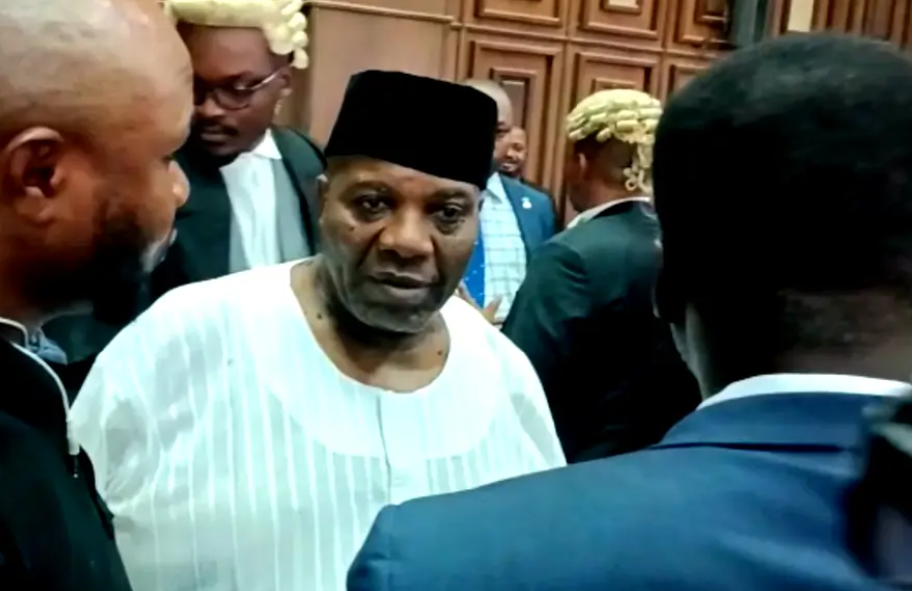 He was therefore sentenced to two years imprisonment by Justice Ijeoma Ojukwu of a Federal High Court in Abuja with an option of N500, 000 fine on each of the 26 count charges for which he was found guilty.

Delivering her judgment, Justice Ojukwu held that Okupe, who is the first defendant in the suit filed by the Economic and Financial Crimes Commission violated the Money Laundering Act.

She said he had up to 4.30 pm to pay the fine option totaling N13m on all the charges he was found guilty of or be sent to the Kuje Correctional Centre.

Justice Ojukwu, in sentencing Okupe, considered the pleadings for leniency from the convict’s wife, Omolola, and his son, Adesunkanmi.

Consequently, the court found Okupe guilty in counts 34, 35, 36 to 59 and sets him free from counts 1 to 33 because the prosecution failed to establish the charge of money laundering and criminal breach of trust and corruption against the NSA.

In counts 34 to 59 upon which Okupe was convicted, he was accused of receiving various sums of money ranging from N10m on different occasions from 2012 to 2015 when he was Jonathan’s aide.

The said sum, he said, was spent on running his office, payment of staff members, and image laundering of the former President and his administration. But, the court, however, held that receiving such amounts in cash violated the Money Laundering Act.

Shortly after his conviction, Okupe’s counsel, Francis Oronsaye, pleaded with the court to temper justice with mercy because the defendant was a first-time offender, a family man who is also advanced in age and having health challenges that he is currently treating in Nigeria and outside the country.

The PUNCH however gathered that Okupe succeeded in paying his fine before the deadline and was allowed to go.

A source said, “Okupe has paid; they returned with the bank papers around 4.25 pm. The court processed it, and everybody signed, including the EFCC lawyer.”

Shortly after his release, Okupe tweeted, “God is not man. The enemies have tried in so many ways but kept on failing. Victory is of God.”

Meanwhile, the leadership of the Labour Party on Monday said it would first obtain a copy of the judgment of the court that convicted Okupe, who is the Director-General of Obi-Datti Presidential Campaign Council and study it before taking a position on the matter.

The spokesman of the campaign council, Yunusa Tanko, disclosed this in an interview with The PUNCH shortly after Okupe was convicted.