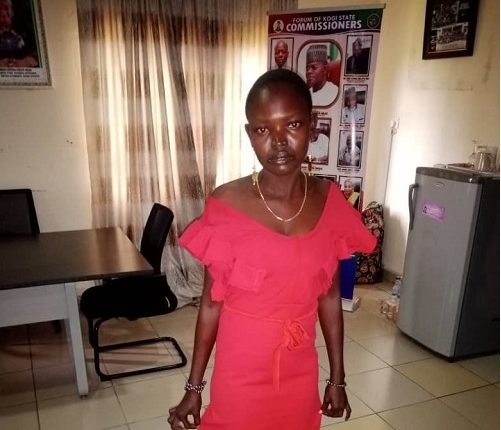 The Ebonyi State Government, on Wednesday, returned one Miss Halimat to its Kogi State counterparts months after she was declared missing in the state after consuming a soft drink suspected to be drugged by a stranger in her home.

It was gathered that Halimat who had lost her memory since the incident, was allegedly drugged after taking a popularly soft drink in her home town in Uhodo in the Okehi Local Government Area of the state.

According to Halimat attestation, they added substance in the drink that made her lost consciousness and could not remember anything.

When asked about how she got to Ebonyi State, the lady explained that she had no memory of activities that took place after taking the drink.

The young lady was returned to the state by Officials of Ebonyi State Ministry of Women Affairs, Mrs Oge Veronica, Head of Department Social Welfare and Mrs Otozi Patience, Senior Social Welfare Officer of the Ministry, and was received by the Kogi State Commissioner for Women Affairs and Social Development, Hon. Fatima Kabir Buba.

The Ebonyi delegation told the honourable Commissioner that Halimat who had been missing for months was reportedly found in Ebonyi State by a passerby who handed her over to the authorities.

Responding to the gesture, the State Commissioner for Women Affairs and Social Development, Hon. Fatima Kabir Buba, lauded the synergy between Eboyin and Kogi State assuring that the ministry is set to reunite Halimat with her family.