Nearly 500 years ago, this week, William Tyndale, fondly called ‘Father of the English Bible’ was strangled and burned at the stake after being tried and convicted of heresy and treason for translating the Bible into English.

WHAT WAS TYNDALE’S OFFENSE?

He translated the Greek Bible into English. Simple!

That you have a Bible in a language you can read is largely due to his labours, and many of the very phrases you read in it retain the flavour of his understanding of the Greek and Hebrew.

A graduate of Oxford and Cambridge, Tyndale had a burning desire to make the Bible available to even the common people in England, in order to correct the ‘Biblical ignorance of the priests.’ At one point Tyndale told a priest, “If God spares my life, ere many years pass, I will cause a boy that driveth the plow shall know more of the Scriptures than thou dost.”

Today, 90% of the King James Version of the Holy Bible and 75% of the Revised Standard Version are from the translation made by Tyndale, a man to whom you owe more than you’ll ever know.

It was a nice dream, but how was Tyndale to accomplish his task when translating the Bible into English was ‘illegal’?

He went to London to ask Bishop Tunstall if he could be authorised to make an English translation of the Bible, but the Bishop would not grant his approval.

However, Tyndale would not let the disapproval of men stop him from carrying out what seemed so obviously God’s will. With encouragement and support of some British merchants, he decided to go to Europe to complete his translation, then have it printed and smuggled back into England. 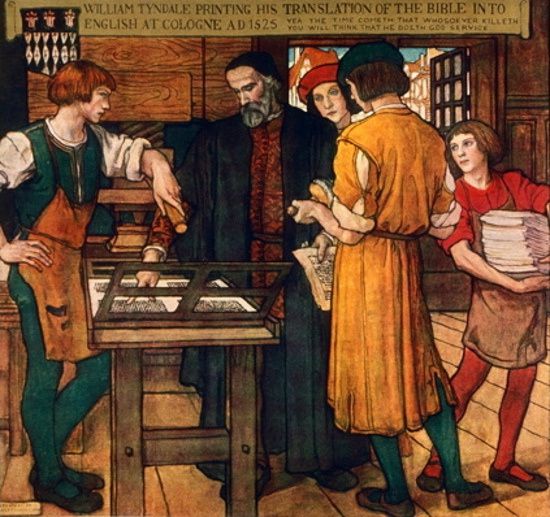 In 1524 Tyndale sailed for Germany. In Hamburg, he worked on the New Testament, and in Cologne, he found a printer who would print the work. However, news of Tyndale’s activity came to an opponent of the Reformation who had the press raided.

Tyndale himself managed to escape with the pages already printed and made his way to the German city Worms where the New Testament was soon published.

Six thousand copies were printed and smuggled into England.

The Bishops did everything they could to eradicate the Bibles. Bishop Tunstall had copies ceremoniously burned at St. Paul’s; the Archbishop of Canterbury bought up copies to destroy them. Tyndale used the money to print improved editions!

Tyndale continued hiding among the merchants in Antwerp and began translating the Old Testament while the King’s agents searched all over England and Europe for him.

WHO CONDEMNED TYNDALE TO DEATH!

A copy of Tyndale’s “The Obedience of a Christian Man” fell into the hands of Henry VIII, providing the king with the rationale to break the Church in England from the Roman Catholic Church in 1534. In 1535, Tyndale was arrested and jailed in the castle of Vilvoorde (Filford) outside Brussels for over a year.

Tyndale’s work was denounced by authorities of the Roman Catholic Church and Tyndale himself was accused of heresy.

HOW DID TYNDALE DIE?

Tyndale, 42 was finally found by an Englishman who pretended to be his friend but then turned him over to the authorities. After a year and a half in prison, he was brought to trial for heresy — FOR BELIEVING, among other things, IN THE FORGIVENESS OF SINS and that THE MERCY OFFERED IN THE GOSPEL WAS ENOUGH FOR SALVATION. In August 1536, he was condemned and was executed [burned alive at the stake] publicly on October 6, 1536, in a small town in Belgium.

As he burnt to death, Tyndale reportedly said “Lord, open the king of England’s eyes.”

WAS HIS PRAYER ANSWERED?

YES! The prayer was answered first in part when three years later, in 1539, Henry VIII required every parish church in England to make a copy of the English Bible available to its parishioners. Today, Tyndale’s prayer is fully answered, not only are the King’s eyes opened, but the Bible a universal instrument.

* In 1611, the 54 scholars who produced the King James Bible drew significantly from Tyndale, as well as from translations that descended from his.

* One estimate suggests that the New Testament in the King James Version is 83% Tyndale’s and the Old Testament 76%.

* His translation of the Bible was the first to be printed in English, and became a model for subsequent English translations.