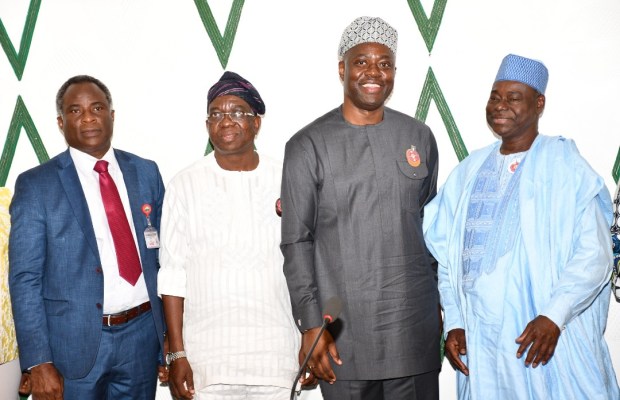 Oyo State Governor, Engineer Seyi Makinde, has promised the Management of the University College Hospital ( UCH) Ibadan the readiness of his administration to sustain the collaboration and cooperation between the State the hospital.

The Governor, who made the disclosure while hosting the Board of Management of UCH on a courtesy visit to his office, said that the collaboration would help raise the bar of health care delivery in Oyo State.

A statement signed by his Chief Press Secretary to the Governor, Mr. Taiwo Adisa said the Government of Oyo State would make the UCH Annex, Sepeteri functional.

Governor Makinde, while addressing the UCH team, led by the chairman of the Board, Alhaji Ibrahim Bako Shettima, said his administration would continue to leverage on institutions like the UCH to improve the Secondary Health Institutions in the State.

The Governor promised that his Government would continue to support the UCH in any way.

Governor Makinde was quite appreciative of what the institution had been doing said he would love to sustain the productive collaboration and partnership with the frontline health institution.

Governor Makinde said: “UCH has a history of collaboration and cooperation with the people and Government of Oyo State. So, I want to thank you for that and ask that this should be sustained.

“It has been a history of firsts for us in Oyo State. The Cocoa House building was started around 1959 and commissioned in 1965 and when we look at the area today, the skyline has not changed. So, we ask ourselves how do we sustain the vision of the leaders that brought such massive developments to this part of the world? Western Nigerian Television (WNTV) also happened to be the first television station on the continent.

” Even historically, I was told that the station came into being before the Southern part of France even had the opportunity to watch TV. Today, we watch DSTV and almost every home cell in Nigeria is paying some money to South Africa who came behind us.

“The same thing is happening in the health sector. Historically, I also read that UCH, in the evaluation that was done in the late 50s among the Commonwealth countries, was rated far higher than the University College in London itself.

“So, we have basically derailed from the trajectory, which our founding fathers set for us as a country but that is not the end of the story. The story is that we have to hold ourselves responsible and accountable to change the narrative; to put in our best such that two years from now, we should see how we have leveraged on that to raise the bar.

“This administration is resting on four major pillars; education, security, health and expansion of our economy. So, health is a major pillar and we will continue to look up to institutions like UCH to assist us, support us, collaborate with us. I believe the management of UCH will deploy its excess capacity to support our secondary health institutions in Oyo State. Whatever I can do to support the process, I am available and we will do it together.”

Governor Makinde called on the management of the UCH to avail the Government of the state of things at the Hospital’s annex in Sepeteri, Saki East Local Government, noting that his administration would ensure that the facility is fully function.

He said: “We want the UCH annex in Sepeteri, Saki East Local Lovernment area to remain functional and if there are challenges we need to be aware of as a government, we are ready.”

Personally, I have visited UCH many times and when things were really tough for me towards the election in 2015, I had to move into UCH because of the security challenges. So, I will say, at that time, UCH basically saved my life. I want to believe that the same level of alertness on security is being maintained.

“So, if there is a need to support you in any way, let us know. We are going to do that even without blinking an eye. It is good that we transited at the same time in March. Now, we can both benchmark our progress the same way. We don’t believe we know everything in this place. If you see anything, which may not be even health-related, please, let us know and we will be ready to engage.”

Earlier, the chairman of the UCH Board of Management, Alhaji Shettima said the purpose of the visit was to congratulate Governor Makinde on his election and eventual victory after three rounds of legal hurdles and also to cement the relationship between the UCH and the Oyo State Government.

He appreciated the Oyo State Government for its support and collaboration with the institution, which he said had a history of many firsts like the State, calling on the Government to look in the Hospital’s direction whenever it needs ideas to sustain its pacesetter status.

“For now, the government is prioritising primary health care and that was the point the Governor was making; the contribution UCH is making in Sepeteri, Ibarapa and also a couple of other places in the state.