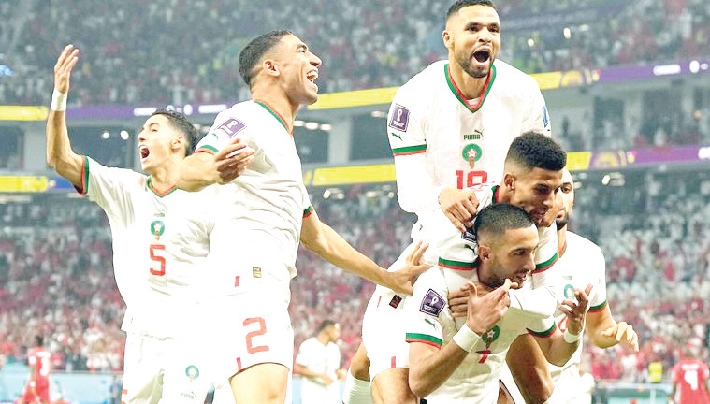 Following their impressive win over one of the tournament favorites, Spain, at the ongoing World Cup in Qatar, Morocco now shares some similarities with Nigeria at the biggest football showpiece in the world, PUNCH Sports Extra reports.

The North Africans frustrated Spain’s bid to reach their first World Cup quarter-final since 2010 on Tuesday, after defeating the former champions in a penalty shoot-out, after full and extra time ended 0-0 at the Education City Stadium.

Walid Regragui’s side defended spectacularly for 120 minutes, although Spain offered very little cutting edge in the final third, and it was a similar story from the spot for the 2010 champions.

Spain did not score a single penalty in the shootout, as Pablo Sarabia, Carlos Soler and Sergio Busquets all missed, before Achraf Hakimi had the audacity to send the Atlas Lions through to the last eight with a Panenka.

The Atlas Lions’ victory over La Rojas sees them match some of Nigeria’s World Cup records.

The win means they are the second African side to have defeated the Spaniards at the World Cup, after the Super Eagles did so in 1998 in France.

Twenty-four years ago, Nigeria and Spain crossed paths in France with both teams in Group D.

The three-time Africa champions completed a shock 3-2 comeback win over the Europeans in their opening game of the tournament inside Stade de la Beaujoire – Louis Fonteneau in France, thus, becoming the first African country to inflict defeat on Spain.

Another interesting feat the Lions share with the Eagles after their famous win on Tuesday is that they are also the second team from Africa to have topped their group at multiple World Cups.

Morocco first topped their group in 1986 in Mexico, finishing above England, Poland and Portugal in Group F.

The Lions drew their first two games against Poland and England before defeating Portugal in their final group game to top the group with four points and become the first African team, and only the second nation from outside Europe and the Americas (after North Korea in 1966), to reach the second round.

The feat was matched by Nigeria in 1994 in the US.

Led by Dutchman Clemens Westerhof, the Eagles finished their Group D ahead of Bulgaria, Argentina and Greece. A defeat to an Argentine side captained by Diego Maradona at the Foxboro Stadium, Foxborough was Nigeria’s only defeat in the group as they recorded wins over their other two opponents.

Four years after in France, Nigeria, along with Paraguay, advanced to the Round of 16 after a surprise elimination of top seed Spain, and they did so in style after finishing as leaders of the group for the second time.