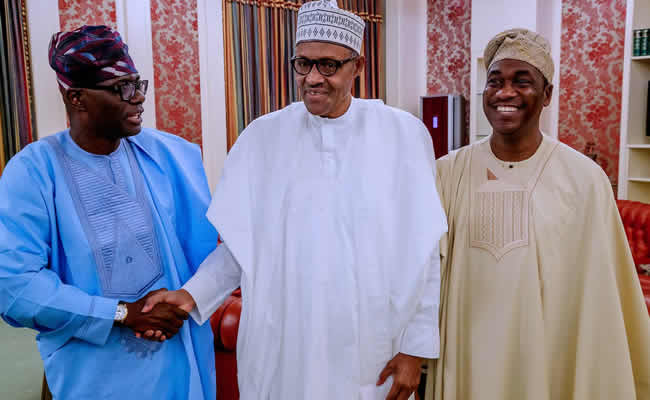 The Lagos State Governor, Babajide Sanwo-Olu, has announced that the state will host the President, Major General Muhammadu Buhari (retd.), for a two-day working visit next week.

The state Commissioner for Information, Gbenga Omotoso, announced this on Friday during a press briefing held in Alausa, Ikeja.

Omotoso disclosed that the presidential visit, scheduled for January 23 and 24, would include the inauguration of projects undertaken by the Sanwo-Olu administration which include the Lekki Deep Sea Port, the Imota Rice Mill and the Blue Line Rail project.

He said, “Governor Babajide Sanwo-Olu has asked us to inform you that President Muhammadu Buhari will be on a two-day working visit to our dear state. This will be Mr. President’s first official visit to Lagos State since assumption of office of Governor Sanwo-Olu and his deputy, Dr Kadri Hamzat in May, 2019.

It is a visit where Mr. President will again see the beauty of Lagos and take the opportunity to see first-hand and commission the life-changing and people-oriented projects undertaken by the Babajide Olusola Sanwo-Olu administration.

“The projects are the Lekki Deep Sea Port, a symbol of a good working relationship between the public and private sectors; the 32-metric tonnes per hour Lagos Rice Mill, one of the largest in the world; the 18.75-kilometer six-lane rigid-pavement Eleko Junction to Epe Expressway; the John Randle Centre for Yoruba Culture and History and the iconic Lagos Blue Line rail project.”

The commissioner added that Buhari would also inaugurate a private sector project, MRS Lubricant factory in Apapa, noting that the governor and his wife, Dr Ibijoke Sanwo-Olu, will lead other dignitaries to give the President a befitting state welcome.

Meanwhile, the Lagos State Government has also announced that traffic will be restricted on Monday, January 23, with a diversion on Lagos Island on Tuesday 24th January 2023 in preparation for Buhari’s visit.

This was disclosed in a statement issued by the state Commissioner for Transportation, Dr Frederic Oladeinde, on Friday.

He said, “Traffic will be restricted on Monday and alternative routes have been mapped out as well as the deployment of the state Traffic Management Authority, to manage traffic flow during the two-day visit.

“On Monday, the movement around Lagos Rice Mill, Imota in Ikorodu, and the Lekki Deep Port Sea axis will be restricted. While on the second day which is Tuesday 24th, movement around Eko Hotels and Suites, Ahmadu Bello Way, J-Randle through to Broad Street and Outer Marina will be diverted from 6.00 am to 3.00 pm.

“The options according to the movement plan will have motorists diverted from Ahmadu Bello Way, Ademola Adetokunbo and Akin Adesola Street to Falomo Bridge (Five Cowries Bridge), to Alfred Rewane Road to connect their desired destinations.”

The commissioner added that all the streets which lead to the dedicated routes for the movement of the President would be temporarily closed.