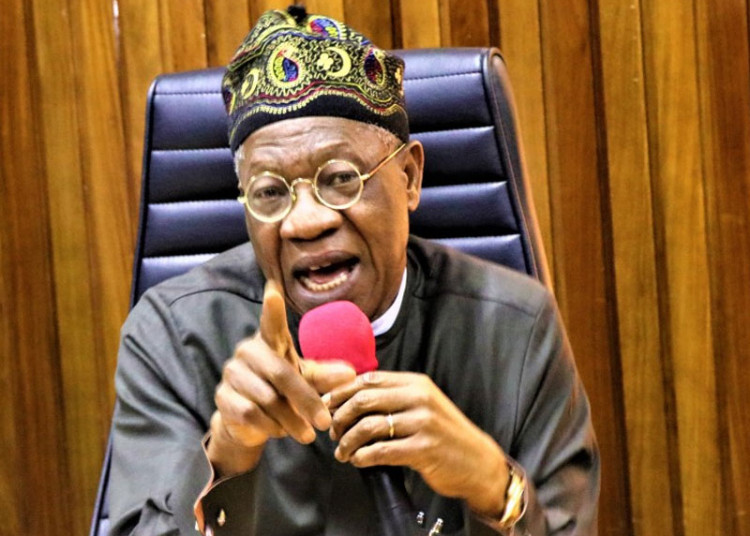 The Minister of Information and Culture, Alhaji Lai Mohammed, has said that the #EndSARS report by the Lagos State Judicial Panel of Inquiry was riddled with so many errors and inconsistencies.

Mr Mohammed said this on Tuesday while addressing a news conference in Abuja. He also described the report circulating online as fake.

His comments come a week after the judicial panel probing allegations of police brutality in Lagos State submitted its findings to Governor Babajide Sanwo-Olu.

One of the reports was on claims of police brutality while the other was on the shooting in the Lekki area of Lagos State on October 20, 2020, said to have killed and injured several protesters.

He also asked relatives of the victims to come forward with evidence, saying that “any parent who is afraid to testify about the death of his or her child is not worthy to be called a parent”.

Alhaji Lai Mohammed, has said that the #EndSARS panel report submitted by the Lagos State Judicial Panel of Inquiry was a waste of time and taxpayers’ money.

“Instead of sitting for all of one year, the panel could have just compiled social media ‘tales by the moonlight’ on the incident and submitted, saving taxpayers’ funds and everyone’s time,” Mr Mohammed said on Tuesday while addressing a news conference in Abuja.

“That report is nothing but the triumph of fake news and the intimidation of a silent majority by a vociferous lynch mob,” he added.

Below is the full text of his speech.

TEXT OF THE PRESS CONFERENCE ADDRESSED BY THE HON. MINISTER OF
INFORMATION AND CULTURE, ALHAJI LAI MOHAMMED, IN ABUJA ON TUESDAY NOV. 23RD 2021 ON THE REPORT OF THE LAGOS STATE JUDICIAL PANEL OF INQUIRY AND RESTITUTION TO INVESTIGATE CASES OF POLICE BRUTALITY AND THE INCIDENT OF OCT. 20TH 2020 AT LEKKI TOLL GATE

2. It’s no longer news that the Lagos State Judicial Panel of Inquiry that investigated cases of police brutality as well as the incident of Oct. 20th, 2020, at Lekki Toll Gate in Lagos has submitted its report. The submission happened while I was out of the country on national assignment. Unlike many commentators and analysts, we took our time to read and digest the report, and we are now well placed to respond.

3. Without mincing words, let me say that never in the history of any Judicial Panel in this country has its report been riddled with so many errors, inconsistencies, discrepancies, speculations, innuendoes, omissions and conclusions that are not supported by evidence. What is circulating in public space is simply a rehash of the unverified fake news that has been playing on social media since the incident of Oct.
20th 2020. It is simply incredible that a Judicial Panel set up to investigate an incident has submitted a report laden with allegations, the same allegations it was set up to investigate in the first instance. Instead of sitting for all of one year, the panel could have just compiled social media ‘tales by the moonlight’ on the incident and submitted, saving taxpayers’ funds and everyone’s time. That report is nothing but the triumph of fake news and the intimidation of a silent majority by a vociferous lynch mob.

4. Gentlemen, we have read some critical analysis of the report by a courageous few. One commentator, a lawyer, said it raised more questions than answers. Another commentator, a journalist, called it a ‘disgraceful report by a disgraceful panel’, saying it reported allegations instead of investigating the allegations. Yet another wondered how a Judicial Panel could use the words ‘massacre in context’ and equate such to a massacre. All these and many more have raised valid questions on that report. We salute their courage and refusal to be cowed by the rampaging lynch mob that has been screaming blue murder since the report was released.

5. We do not intend to bore you by rehashing details of the discrepancies, innuendoes, inconsistencies and errors in that report. They are already in the public space. Let us, however, point out some key highlights of such discrepancies, errors, omissions, etc.

i) – The report threw away the testimony of ballistic experts who testified before it. The experts said, inter alia, in their testimony:

”The Team finds that from the medical data examined, including the
timeline of arrival at medical facility and the nature of the injuries
sustained by the Victims, who were taken to the 5 medical facilities,
that no military grade live ammunition (high-velocity) was fired at
the protesters at Lekki Tollgate on 20th October 2020, within the
timeframe of reference (18.30- 20.34hrs). That the GSW (Gun Shot
Wounds) injuries (4 in number between 19:05 and 19:45 hrs), which were
examined by the Team, can be safely identified as being discharged by
either low velocity caliber and/or artisanal/12-gauge firearms
(artisanal firearms are locally-fabricated weapons). What is however
certain is that had the military personnel deliberately fired military
grade live ammunition directly at the protesters; there would have
been significantly more fatalities and catastrophic injuries
recorded. This was clearly not the case.’’

ii) – The same panel that said it deemed as credible the evidence of the Forensic Pathologist, Prof. John Obafunwa, that only three of the bodies on which post mortem were conducted were from Lekki and only one had gunshot injury went on to contradict itself by saying nine persons died of gunshot wounds at Lekki!

iii) – The man whose evidence (that he counted 11 bodies in a military van where he was left for dead before he escaped) was found to be crucial by the panel never testified in person. Rather, the video of his ‘testimony’ was played by someone else. It did not occur to the panel to query the veracity of the testimony of a man who said he was shot and presumed dead but still had time to count dead bodies inside a supposedly dark van at night!

vi) – How did a man who reported seeing the lifeless body of his brother himself ended up being on the list of the panel’s deceased persons?

vii) – How can a Judicial Panel convince anyone that the names of some casualties of the Lekki Toll Gate incident listed as numbers 3 (Jide), 42 (Tola) and 43 (Wisdom) are not fictitious names.

ix) – The report never mentioned cases of police personnel who were brutally murdered or the massive destruction of police stations, vehicles, e.t c during the Endsars protest. Does this mean that the panel didn’t consider policemen and women as human beings?

x) – The report didn’t make any recommendation on the innocent people whose businesses were attacked and destroyed during the protest in Lagos. I think it was too busy looking for evidence to support its conclusion of ‘massacre in context’.

6. It is clear, from the ongoing, that the report of the panel in circulation cannot be relied upon because its authenticity is in doubt. Besides, the Lagos State Government, being the convening authority, has yet to release any official report to the public.

Neither has the panel done so. The cowardly leakage of an unsigned report to the public is not enough. Assuming the report in circulation bears any iota of genuineness, it is basic knowledge that the report of such a panel is of no force until the convening authority issues a White Paper and Gazette on it. It is therefore too premature for any person or entity to seek to castigate the Federal Government and its agencies or officials based on such an unofficial and unvalidated report.

The CNN has been celebrating the leaked report of the Lagos State Judicial Panel of Inquiry. In its rush to claim vindication, CNN apparently didn’t even read the report before rolling out the drums in celebration. By that action, CNN has celebrated prematurely and has now committed a double faux pas: First, by relying on unverified social media stories and videos to carry out an investigation of the Oct. 20th 2020 incident at Lekki, where it did not have a correspondent on ground.

CNN goofed in its report on the findings of the panel, which fell below the main standards of journalism. Secondly, CNN rushed to the air to celebrate an unsigned and unverified report that is riddled with inconsistencies, errors, discrepancies, innuendoes. That’s double faux pas by a news organization that is eager and willing to compromise standards just to claim vindication.

8. Sadly, a section of the Nigerian media has also joined the lynch mob. Honestly, in an attempt to vilify government at all costs, they have done themselves a great disservice. How can any news organization worth its salt write an Editorial validating this kind of report? Are they not seeing what others, including journalists and lawyers, are seeing? In a shocking twist, a Nigerian newspaper chose to hail what it calls ‘’detailed investigative report’’ by CNN, even when the news channel did not even cover the incident of Oct. 20th 2020! It’s a classic case of cutting your nose to spite your face.

9 CONCLUSIONS
i) – Gentlemen, there is absolutely nothing in the report that is circulating to make us change our stand that there was no massacre at Lekki on Oct. 20th 2020. For us to change our stand, a well-investigated report of the incident that meets all required standards and will withstand every scrutiny must be produced and presented to the public. The report in circulation does not meet those requirements.

We also appeal to the families of those allegedly killed in Lekki to speak out. It’s untenable to say that some families did not come out because they are afraid. Any parent who is afraid to testify about the death of his or her child is not worth to be called a parent.

ii) – We reject the notion that our soldiers and policemen massacred innocent Nigerians at Lekki on Oct. 20th 2020. That conclusion is not supported by the weight of available evidence. Indictment for murder is a very serious issue that cannot be done on the basis of allegations and corroborations, as the panel did.

Such allegations must be proved beyond a reasonable doubt. The report in circulation is calculated to embarrass the Federal Government and its agencies without foolproof evidence. The Federal Government has never condoned the abuse of the rights of Nigerians by security agencies under any guise, hence it disbanded SARS and encouraged states to set up the panels to investigate reports of human rights abuses allegedly committed by the disbanded SARS personnel

iii) – The 37 policemen and six soldiers who died across the country during the Endsars protest are also Nigerians and should not be forgotten.

iv) – Those who have engaged in premature celebration of the report in circulation should now go back and read it thoroughly and tell Nigerians whether it can pass any serious scrutiny.

v) – We are saddened that anyone died at all during the Endsars protest as the life of every Nigerian and indeed every human is sacrosanct. As we have disclosed many times, 57 civilians, 37 policemen and six soldiers were killed across the country during the protest, and we commiserate with their families.

10) Gentlemen, I thank you for your kind attention. I will now take your questions.