Kukah to Buhari: You’re leaving Nigeria Worse Than You Met It, Having Failed In All Your Promises 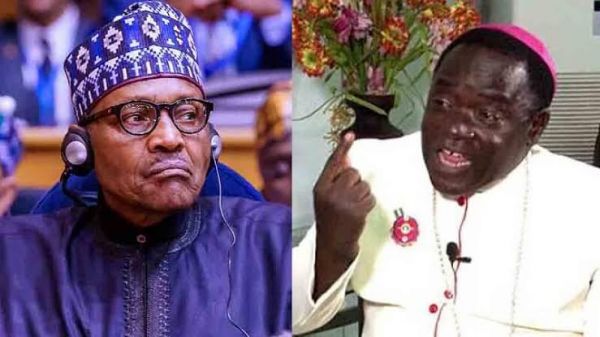 Catholic Bishiop of Sokoto Diocese, Mathew Hassan Kukah, yesterday, lashed out at President Muhammadu Buhari for failing to fulfil his campaign promises, saying the president would be leaving Nigerians by May 2023 more vulnerable than when he took over in 2015.

The cleric in his Christmas message, yesterday, described Nigeria as being “in severe distress” claiming the president, who has barely six months to leave office, had failed to tackle corruption, insecurity, poverty, joblessness, fix the rot in the healthcare sector, unify the country, honour and adhere to the federal character provisions of the Nigerian Constitution, even as he has plunged the country into more internal and external debts, among others.

Kukah said despite constant attacks by the president’s spokespersons, it was obvious Nigeria had lost its once cherished glory among the comity of nations.

He also accused the political class of enriching themselves to the detriment of the majority of the masses and thus creating a caste class in the country.

“A caste system has emerged in our country. It has consolidated its hold and blunted the cutting edge of all institutions. A majority of its children are swimming against the tide for survival with no support while the other caste smiles in the comfort of their life jackets. How did caste emerge in our country?”

He said the country required honest and courageous leaders to fix its numerous challenges.

Part of the message read: “Mr. President Sir, a merry Christmas to you and your entire family. I speak for myself and Nigerians when I say, we thank God that He mercifully restored you to good health. We know that you are healthier now than you were before. We can see it in the spring in your steps, the thousands of miles you have continued to cover as you travel abroad. May God give you more years of good health. However, I also wish that millions of our citizens had a chance to enjoy just a fraction of your own health by a measurable improvement in the quality of health care in our country.

“It is sad that despite your lofty promises, you are leaving us far more vulnerable than when you came, that the corruption we thought would be fought has become a leviathan and sadly, a consequence of a government marked by nepotism.

“In my Christmas Message last year, I pointed out the fact that you had breached the Constitution by your failure to honour and adhere to the federal character provisions of our Constitution. The evidence is all before us all.

“The important thing is that none of my critics has quarrelled with my facts. If they accuse me of stating inconvenient facts/truths, then, they can at least give the facts their interpretations. For example, who will quarrel with the fact that our glory has departed as a country? Where is our voice respected today even within the African continent which looks up to us for leadership? Unless we count lining up behind others for handshakes across Europe and America as achievements, we will be remiss not to worry about our declining global influence. Is being the poverty capital of the world and one of the most violent states in the world an achievement? And our suffocating internal and international debts? And you do not think our glory has departed?

“Clearly, in almost every department and with all indicators, our nation has become a tale of two cities. We have wars between the rich and the poor, men and women, across generations, along party lines, social classes, religion, ethnicity and so on.

“The centre has given up in almost every department. Fixing our country and getting it back requires courage, honesty, truth, humility, trust and firm commitment. Lies and blackmail are no substitute…

“To all the members of the political class a happy Christmas. You are seeking power at a time that the nation is in severe distress. You must demonstrate that you grasp the length and breathe of the problems that our country faces. We have heard your promises, but we do know that promises before elections are sweet, but actions after elections are often bitter. … Seek to create a vision that can unite our country. Learn the mistakes of the past especially in the areas of managing our diversity and designing and effective mechanism for power sharing. Nepotism is a cancer which has consumed us in the last few years. We have paid the price of nepotism entrusting power into the hands of mediocre who operate as a cult and see power purely as an extension of the family heirloom.”