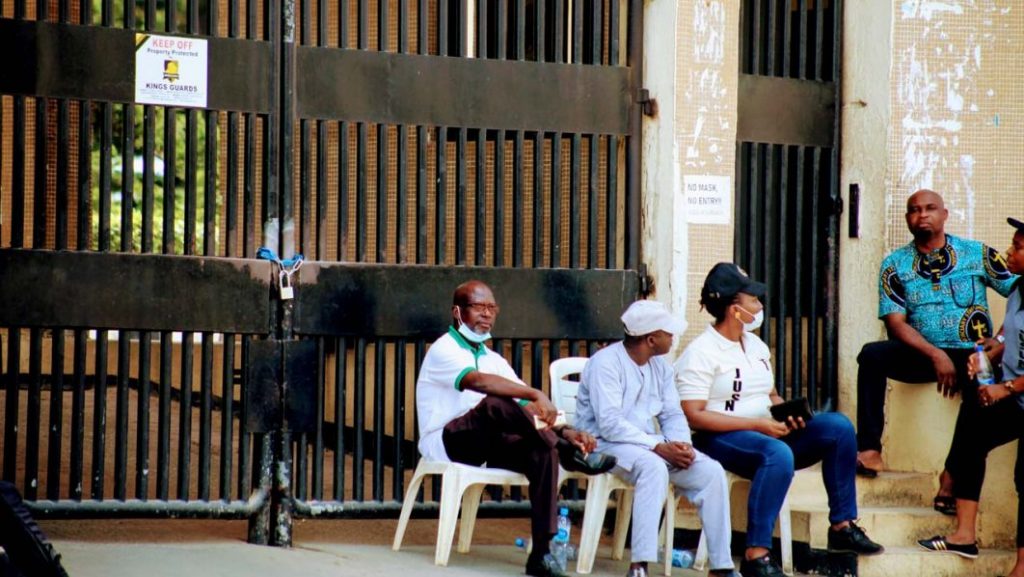 Despite the last-minute intervention by the national leadership of the Nigerian Bar Association (NBA) to halt the nationwide strike proposed by the Judiciary Staff Union of Nigeria (JUSUN), members of the union yesterday grounded courts across the federation.

JUSUN had in a notice issued by its General Secretary, I. M Adetola, dated April 1, 2021, announced that it would begin a nationwide industrial action yesterday to press home JUSUN’s demands for enforcement of financial autonomy in the Judiciary.

The union stated that it had, at its last National Executive Meeting on March 13, 2021, in Abuja, issued a 21-day ultimatum to the government to implement the financial autonomy of the judiciary with a threat that “failure of which JUSUN will have no other option but to resume the suspended national strike action.”

But the NBA in a statement by its President, Olumide Akpata, urged the body to shelve the strike in the interest of the public, adding that the timing was wrong.

Adamant to the NBA pleadings, the union yesterday commenced the strike as scheduled and also enforced it across the country.
Even an emergency meeting called by the Chief Justice of Nigeria (CJN), Justice Tanko Muhammad, with leaders of JUSUN could not stop the workers’ action.
Outcome of the meeting is not yet disclosed at press time.

Notwithstanding the meeting, the unionists stormed the Federal High Court premises in Lagos and evicted court workers.

They arrived on the court premises before 9 a.m. and directed their colleagues, who were in courtrooms and in their offices to comply with the industrial action.
They sealed some of the offices and pasted notices indicating the commencement of the court shutdown.
The unionists also prevented court workers and other court users from gaining access to High and Magistrates’ Courts in Ikorodu.
Also at the Ikeja High Court, members of JUSUN donning red vests prevented entry into the premises by members of the public by sealing all the entrances to the court premises.
A banner notifying the public about the ongoing strike was placed conspicuously at the main entrance of the court.
Members of the union were also observed chanting words of protest stating that their rights should be enforced. “Solidarity forever, we shall always fight for our right,” they cried.
In Ibadan, Oyo State, JUSUN members boycotted courts, leading to the paralysis of legal activities in the state.
Lawyers and litigants in customary, magistrates’ and high courts were turned back as a result.
Speaking with The Guardian, the Oyo State Chairman of JUSUN, Kayode Martin, said there was no going back on the action.
Martins regretted that nothing positive had been done to the Executive Order signed by President Muhammadu Buhari, granting financial autonomy to both judiciary and the legislative arms of government.
Martin said: “We commenced the industrial action today (Tuesday). The Executive Order signed by the President has not seen the light of the day. The governors’ forum is not ready to implement the autonomy.
“They don’t want it to see the light of the day in their respective states. Without autonomy, the principles of checks and balances and separation of power will not be in place. That is our agitation.”
In Ondo, the state High Court, officials of JUSUN, led by the state Chairman, Mr. Femi Afolabi, shut down Appeal Court, Magistrate Courts, and the Federal High Court in Akure.
Some lawyers and litigants returned home disappointed as they met gates of the court locked by JUSUN officers, while staff members of the Federal High Court were forced out of the premises.
The story was not different in Osun as judicial workers paralysed courts in the state.
Led by its Chairman, Gbenga Eludire, the state executive of the union stormed Federal High and State High Courts and the Industrial Court in Osogbo to affect the industrial action.
Addressing workers after shutting the gates of the courts, Eludire claimed that the neglect of the judiciary was responsible for all forms of criminal activities in Nigeria, hence the need for the full implementation of its autonomy.
“I want to enjoin all members to stay away from office. The union will not take it easy with members who violate this order,” he said.
Reacting to the development, Osun State Attorney General and Commissioner for Justice, Femi Akande, said the state government was ready to negotiate with the union, adding that the governor places a premium on the welfare of workers, including members of the judiciary.
He urged members of the public to bear with the government, as efforts to resolve the issue would be fast-tracked.
In Ebonyi, judicial workers shunned the directive by JUSUN, as normal court activities took place.

When The Guardian visited the State High Court in Abakaliki, full judicial activities were on.

Meanwhile, all attempts to get the reaction of the state chairman of JUSUN, Mr. Felix Nnanchi proved abortive.

However, a top official of the Union in the state, who pleaded anonymity, said he was not sure whether they would embark on strike due to the crisis, which polarized the union in August 2020.
In compliance with the order of the national body, judiciary workers in Imo State commenced indefinite strikes and shut all courts in the state.
A lawyer, simply identified as Charles, who spoke to The Guardian, said he was not happy with the situation because it would affect their income.

“I do not like it. The situation will make our clients stay away for a while and that will affect our earnings,” he lamented.

The strike was observed in River State, crippling court activities.

Observations by The Guardian showed that all courts in the state, including the federal, state, customary, and Appeal Courts were all under lock and key.
Chairman of the NBA, Rivers State, Prince Nyekwere, re-echoed the position of the NBA national leadership by saying that the strike was ill-timed.

He argued that it would affect lawyers and the general public.

He said: “As a major stakeholder in the administration of justice, the timing of the strike is wrong, we are quite aware that the court has been on hold for long, following the COVID-19 pandemic. I thought that the judicial workers would have explored other avenues to drive home their demands rather than embark on strike.”

However, the state chairman of JUSUN, Anthony Wachukwu, and the state Labour Chairman, Comrade Beatrice Utubor expressed support for the strike.

The chapter of JUSUN, in compliance with the directive of its national secretariat, also shut down High Courts of the Federal Capital Territory (FCT).
Some of the striking workers, who spoke to The Guardian, said all negotiations and entreaties had been violated and abused by the government.

They, however, said the fight was for the benefit of all judicial workers, which included judges, who have embarked on Easter vacation to resume April 12, 2021.

The Chairman of the Plateau State chapter of JUSUN, Comrade Philip Lonji has declared that the association would continue to shut down courts in the state because the government has refused to implement Executive Order 10, signed by President Buhari.

JUSUN members also grounded in court activities in Jigawa yesterday.
Most of the judges and lawyers abandoned court sittings, in compliance with the strike action.

Former NBA Chairman in the state, Baffa Alhassan, frowned on the development and expressed optimism that the authorities concerned would amicably resolve the matter in time.

“We do hope that both the government and the judiciary would close ranks in finding a lasting solution to all issues at stake,” he said.

In Kwara, the state Chairman of JUSUN, Ibrahim Sambo, expressed delight that the strike had been successful.
“It is a national strike and we can’t afford to opt-out of it. There are some other reasons for the strike but the main reason for the strike is to grant us financial autonomy, which is acceptable to us all. It was a collective decision,” he said.

However, a Lagos lawyer, President Aigbokhan, has expressed his support for the strike.

“The strike will cause loss to lawyers no doubt as to the NBA president earlier identified, but we must come together to achieve success collectively.

“Don’t forget there is an ongoing discussion around judicial autonomy. If judicial workers do not go on strike, the quest for autonomy might be a daydream. The strike is inevitable but they have to call off this one and negotiate again, put their demands on public lips and if the government fails, they can down tools again.

“Also, JUSUN need to add the improvement of the living condition of our judges as part of their agitations. The salary of judges needs to be improved. JUSUN should integrate the demands of judges, who on their own cannot agitate for it,” he advised.