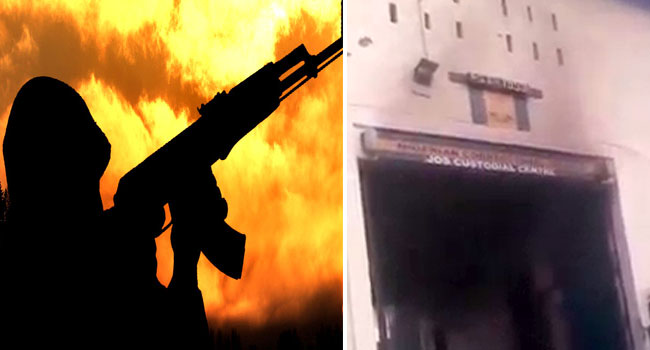 Police have rearrested seven inmates who escaped from the Medium Security Custodial Centre in Jos, authorities at the Plateau State Command have said.

This followed the attack on the correction facility in the state capital by a yet-to-be-identified group of gunmen on Sunday.

Ubah Ogaba, who is the Police Public Relations Officer in the state, confirmed the rearrest of the inmates in a statement.

He revealed that the Commissioner of Police in Plateau, Bartholomew Onyeka, led a reinforcement to the scene of the incident.

The police commissioner, Ogaba stated, directed that the entire area be cordoned off following reports that the centre was attacked by gunmen, leading to the escape of some inmates there.

According to the command’s spokesman, the police immediately began a stop and search operation which led to the rearrest of seven escapees.

While the rearrested inmates are in custody, another person who escaped from the centre is said to have voluntarily surrendered himself to the police.

Ogaba stated that as a result of the prompt response to the attack, the situation was brought under control by the superior gunfire of the security operatives at the scene.

Read the statement by the command’s spokesman below:

On 28/11/2021 at about 1720hrs, the medium-security custodial centre in Jos came under attack by yet to be identified gunmen where some inmates escaped.

Upon receipt of the report, the Commissioner of Police Plateau State Command, CP Bartholomew N. Onyeka who led reinforcement to the scene, directed that the entire centre be cordoned.

The CP also directed immediate stop and search where seven (7) escapees have been re-arrested by the Police and are in Custody while one escapee voluntarily surrendered himself to the Police.

Based on the prompt response, the situation was brought under control by the superior gunfire of Security Agencies.

The CP reaffirmed that the Police and other Security Agencies are currently on the ground to effectively deprive the hoodlums of the space they desire to perpetrate their evil acts.

Meanwhile, the situation is under control.