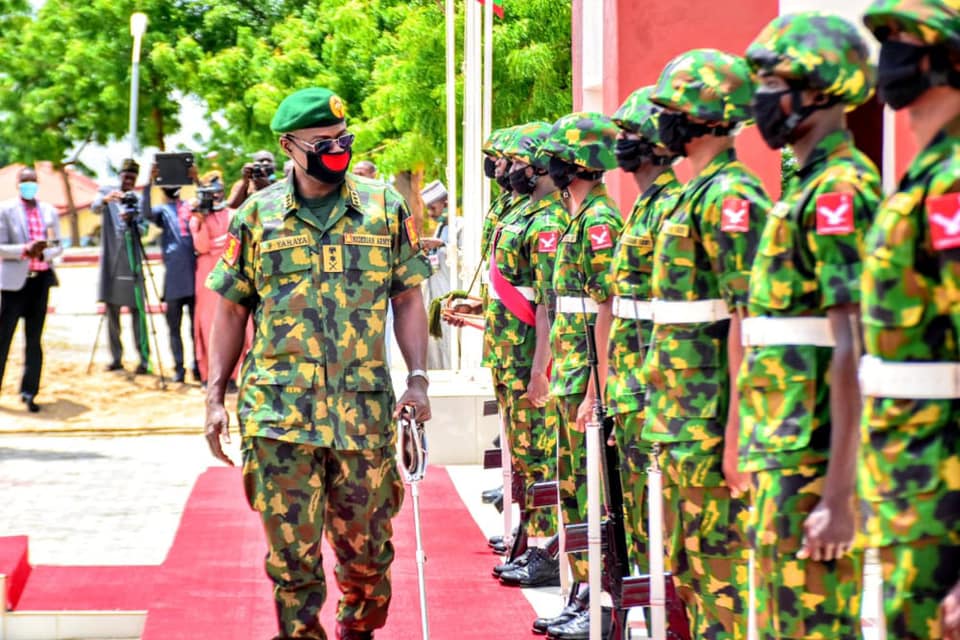 Share
Facebook Twitter LinkedIn Pinterest Email WhatsApp
The Chief of Army Staff (COAS) Lieutenant General Faruk Yahaya has charged troops of 8 Division and Operation HADARIN DAJI (OPHD) to intensify their operations against bandits marauding in parts of North West, Nigeria. The COAS gave the charge today Wednesday 4 August 2021 in Gusau, the Zamfara state capital, while addressing troops during his operational tour of 8 Division and its formations and units.
Commending the troops for their operational exploits in curtailing the activities of the criminals, General Yahaya urged them to promote synergy among the military and other security agencies, describing it, as a strategy that will speed up the end of banditry in the region.
The COAS urged the officers and soldiers to be proactive and resilient in order to crush the bandits and expedite the restoration of normalcy to the affected states. He assured the troops that their welfare is uppermost in the agenda of his command. Gen Yahaya admonished them to ensure they conduct their operations in compliance with extant operational codes of conduct and regulations. He added, that troops must always show respect for the fundamental human rights of law abiding citizens in the conduct of their operations.
Meanwhile, in his brief to the COAS, the General Officer Commanding 8 Division of the Nigerian Army, Major General Usman Yusuf informed that troops’ anti banditry operations have been reinvigorated to expeditiously bring about peace and stability in the region.
The COAS also paid a courtesy call on the Executive Governor of Zamfara State, Dr Bello Muhammad, where discussions were held on the security situation of the state and the North West in general.
Highpoint of the visit was the presentation of Nigerian Army’s memento to the Governor.
ONYEMA NWACHUKWU
Brigadier General
Director Army Public Relations
4 August 2021
COAS
Share. Facebook Twitter Pinterest LinkedIn Tumblr Email WhatsApp