Insecurity And Instability In Nigeria ||By Primate Henry Ndukuba 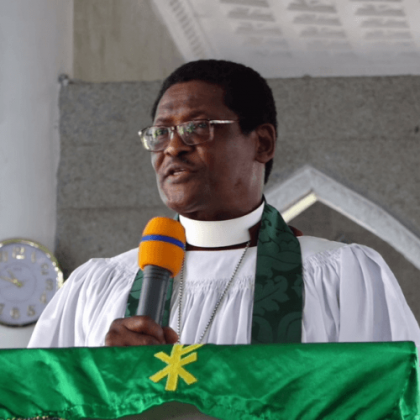 Nigeria is fast becoming a land flowing with Tears and Blood because of the impact of Terror, Banditry, Herdsmen attacks on communities, Kidnapping and many more socio-political disruptions. The troubles that come to the people are like the earthquake which was followed by a Tsunami with great destruction of lives and property. The after math is only ruins and fear for life.

We live in very uncertain times of insecurity and devastations. Across the country people are constantly under attack and in some parts of our Dioceses, churches have been destroyed, our members are kidnapped, some people are killed violently by sudden attacks by unidentified gunmen. The painful thing is that the dead are not counted and no adequate recognition of the evil done.

The trivializing of the sanctity of the lives of Nigerians in their own land is fast becoming a norm. In some cases, the Military and Security Agencies would deny that such incidents ever took place. The lives of Nigerians irrespective of religion, tribe, class or other considerations matter to God and to this Nation.

A situation in which communities that are predominantly Christian are targeted one after another attacked, kidnapped and killed mercilessly and their homes and property destroyed in some parts of Kaduna State and the North Central is totally unacceptable. The constant siege on communities in the Kaduna, Plateau and Zamfara and the Southern States must be checked. The paralysis that is setting in is that we are getting numbed by the constant killings such that the abnormal is becoming normal.

The people are tired, confused and not knowing how to respond to evil happening around us. Often the response of Prayer and righteous anger against the wickedness being perpetrated is weak. Nigeria is gradually relapsing to coma and stupor. God wants to awaken our consciousness to the possibility that He alone can bring peace and order into our situation.

Thus as the Scriptures say “Is there no balm in Gilead, Is there no physician there? Why then is there no recovery for the health of the daughter of My people?” Some of the attacks bear marks of serious compromises and sabotage in the National Armed Forces and Security Agencies and even among Government Officials. We support the efforts of some State Governments in checking the menace of the Armed Herders attacks and the wicked activities of Banditry in Benue, Ondo and Oyo States.

Nigeria is a Federating Nation and each State Government must rise up to make laws and implement policies that help protect lives and property of our citizens. We shall continue to support the call for restructuring the Nigeria Police Force to allow State Governments have their State Police Force and strengthen the present Regional Security Outfits being put in place. The alternative will be near anarchy when zones and regions have their own Militia who portend to defend them from the Bandits and Herders’ attack.

We call on President Mohammad Buhari to brand the Bandits and Herders attackers as Terrorists and let them be treated as such. The Security Chiefs will continue to face their task with determination, and focus bringing an end to Banditry, Kidnapping and anarchy. They need to work in collaboration with the State Governors and Regional leaders and well -meaning organizations. Nevertheless, there is an urgent need for a complete overhaul and restructuring of the former security architecture and purge the Armed Forces and Security Agencies of corrupt officers and expose the sponsors of these evil and heinous crimes that appear to have overwhelmed Nigeria. We hope for a swift, effective and functional security for our country.

(Culled from the Address of Primate Henry Ndukuba to the Church of Nigeria’s Standing Committee September 2021 at Lagos, by the Ven. Dr Princewill Ireoba)