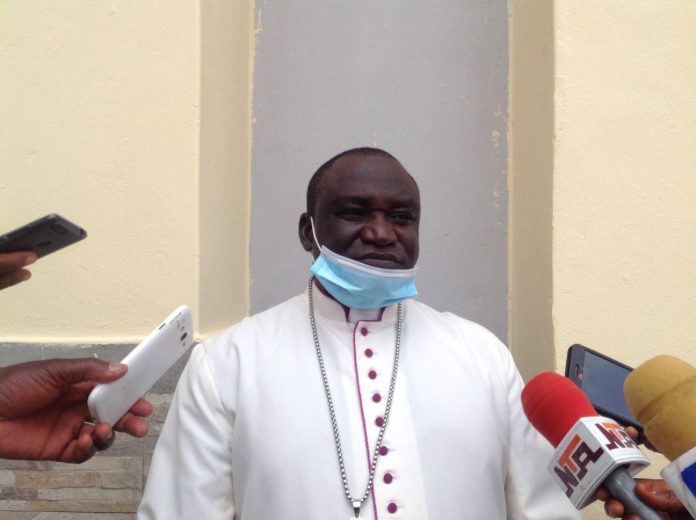 The Rt. Rev’d Timothy Yahaya of Kaduna Anglican Diocese, has described as a national shame for security experts in the country to declare some spaces ungoverned without finding solutions to such situation.

Speaking in his Christmas message, Bishop Yahaya called for State, Local Government and Ward Police, to secure every space and the people in the country.

This was even as he advised that the nation’s military should go back to the barracks, saying they have outlived their usefulness in tackling internal security challenge.

He, however, said that there was hope that things will soon turn around for good in the country, adding that the nation is favoured by God to attain greatness among nations of the world.

“There is the need for the rejig of the security architecture. We are talking about policing of our nation, and we are just talking about a federal police. I hope there will be a state police, local government police and I propose that there should be a ward police, that every ward should have the police that the people in that ward feel should be able to protect them because police affairs is an affair that should be everywhere.

“I want to say a big thank you to those who have died gallantry trying to defend this country. Those who worked assiduously, tenaciously with every zeal and patrotism to ensure that this nation is great.

“But if you look at some of the things we see, military officers betraying military officers. It is like some people within the system are beneficiaries of insecurity. A house divided against itself cannot stand. When you talk about insecurity, how many police men do we have in the entire nation because the work the military is doing is the work of the police ever since we started this insecurity?

“I want to see the rejig of the Nigerian Police and soldiers should go back to the barracks. These things that are happening, police can handle them. If we have a viable police, if we have a modern police, if we have a number of police that we should have on ground, I tell you they can take care of this situation. But look at what we have done today; we have brought in the military, and it looks like the military is not getting tired of this matter. They want to remain there.

“I want to say this with all sense of humility that what we have done with the military, it will take some time to heal in our country because it is like this insecurity has become like a market and some people seem to be benefitting from it. If you are one of those benefiting from this insecurity, remember that if you spill the blood of the people, your blood will not be spared because whatever a man sows, he reaps,” the Bishop said.

“This nation is endowed with so many things that God has given us. This nation is better than any nation of the world. There is hope in this country, and this hope shall touch every life in this great country. And we will be very happy about it. My Christmas message is that there is hope for this country and we must not give up,” he explained.

On the issue of next year’s elections, Bishop Yahaya said, “I want to say that democracy is about canvassing for votes, I want to plead with the politicians to play the game by the rules. They have signed peace accord but it is as if there is no integrity. If there is integrity, everybody should be given a level playing field. The attacks here and there, it means that we have anti-democratic forces.”

On the issue of the CBN’s cashless policy, he said, “As a leader that knows this country very well, I have lived in Kebbi State, camped in all the interiors, lived in Jalingo, Taraba State, camped in all the interiors, and here am I in Kaduna State. As a man that has traveled through this nation, I want to advise the Central Bank of Nigeria (CBN) that it cannot equate us with other nations where technology is everywhere. Even in the city of Kaduna where we are, how many people are so enlightened to make cashless policy. Our policy should reflect who we are.

“Cashless policy is a great policy all over the world, but look at the nations that are implementing it hook, line and sinker. Today, even in Kaduna network fails. You go to PoS machine, it fails, you go to ATM to withdraw money, it fails. The network providers we have here need to wake up and be very serious. Therefore, for me, the cashless policy is a great thing but we have to be very careful before we destroy the economy of this country. I am talking about the reality of who we are, the reality of what we are, does it say we should go cashless, because there are people out there, young people out of schools, whenever you talk about a cashless policy, you look at the people you have.

“Today, to get a tank of fuel, you have to spend more than N20,000. In some of the villages where filling stations are operated, there is nothing like PoS. So when you are even talking about cash withdrawal limit, it is like you are living in another continent, not Nigeria. Whoever is making policy in CBN must reflect what Nigeria stands for and must reflect the people. We should look at what Nigerians are, study the demography very well before we enact a policy.”